Do not feed pumpkin waste to pigs, Defra warns 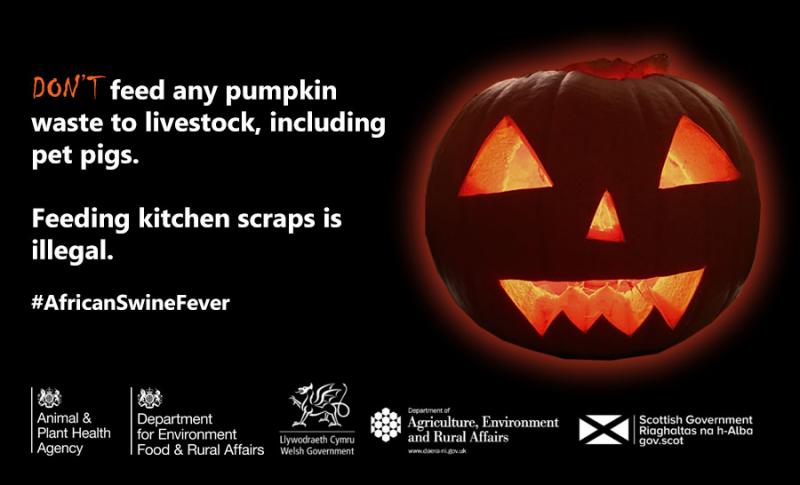 Pig keepers are being reminded not to feed pumpkins left over from Halloween to pigs as it could pose a serious disease risk.

Defra and the Animal and Plant Health Agency (APHA), with backing from the National Pig Association (NPA) and vets, are warning pig keepers that it is illegal to do so.

Feeding catering waste of any description or domestic food waste to farm animals in the UK, including pigs kept as pets, is outlawed.

The UK suffered the consequences of pigs being fed illegal waste food in the foot-and-mouth disease crisis in 2001.

The outbreak is thought to have originated from pigs being fed catering waste containing the virus, which came from outside the UK.

It resulted in the destruction of more than 10 million cattle and sheep and cost the UK many millions of pounds.

It comes as the UK is currently on high alert for African swine fever, which, like foot-and-mouth disease, can be spread via kitchen scraps.

In a series of messages on Twitter, APHA said: "The ban on feeding kitchen waste to livestock was introduced after the devastation of foot & mouth disease - the most likely cause of the 2001 outbreak was catering waste being fed to pigs.

The ban on feeding kitchen waste to livestock was introduced after the devastation of foot & mouth disease - the most likely cause of the 2001 outbreak was catering waste being fed to #Pigs. Read more about what you can feed pigs: https://t.co/Ll8x89CUR8 #Halloween #PigKeeping pic.twitter.com/Og67wCLhhU

"Pumpkins can only be fed to livestock if they have never entered a kitchen and the carving utensils have never been in contact with products of animal origin. This is to help prevent diseases like African swine fever.

"Veg from your kitchen may be cross contaminated by infected meat and risks spreading animal diseases."

APHA added: "Leftover Halloween pumpkins? Unless they were not carved in your house and were carved using utensils that have never entered your kitchen please don’t feed them to your pigs."

The message was reinforced by pig vet Duncan Berkshire on Twitter, who said: "Please spread this information far and wide - many people still think that this is okay and that pigs can eat waste food scraps.

"Feeding pigs food from any kitchen is illegal, and with good reason."