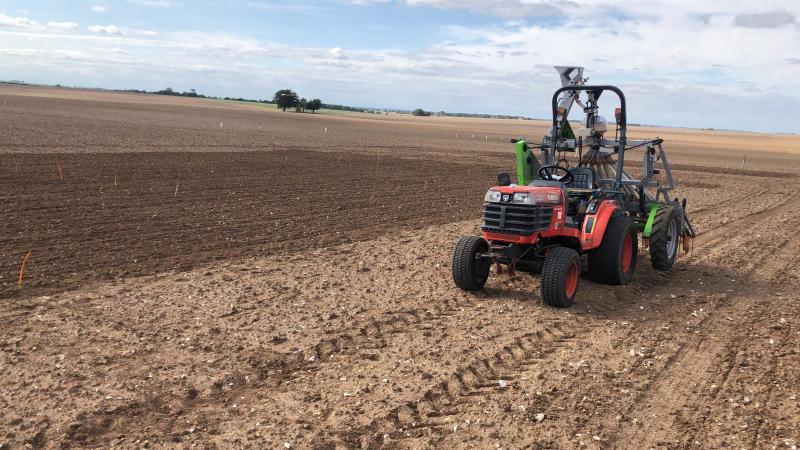 Drilling of crop plots at the 2020 Cereals Event site is nearing completion, with stands of oilseed rape and cereals emerged and growing despite difficult conditions.

“The site is on free draining land and the grass for the Cereals Event has established extremely well - the whole area looks a picture,” says host farmer Robert Law.

According to crop plot manager Paul Scrimshaw, 100% of the exhibitor plots had been drilled by the end of October.

The Choice Cereals plots – featuring most of the approved and candidate winter wheat and barley varieties – are now ready to go in.

“Like elsewhere in the UK, we’ve experienced very tricky wet conditions – although we’ve escaped more lightly than some areas in the West Midlands,” says Mr Scrimshaw.

“We’re on light land and the whole 50ha site was ploughed and pressed before we started.

“The grass is looking really good, and I’m really impressed with how the Syngenta Sprays and Sprayers Arena looks.”

With over 30 varieties of wheat and more than 20 of barley, alongside oilseed rape, linseed and novel crops covering around 5ha of crop plots, the logistics of sowing and managing the site can be complicated even with perfect weather conditions, he adds.

“It’s very different growing a show crop to a farm crop. To a farmer, it’s the economics that are important at the end of the day, whereas with show plots all exhibitors want them looking beautiful so you do have to go the extra mile.”

To sow the crops, Mr Scrimshaw has two 30hp open-cabbed tractors, 1.2m and 2m cultivators and a 2m drill – although he can call in specialist equipment if required.

One of the biggest challenges this year – as for many farmers – has been cabbage stem flea beetle attacks on oilseed rape.

“They caused a lot of damage early on and a couple of weeks ago I thought we might have to abandon two plots, but they are now all up and firing away – it feels like a minor miracle,” says Mr Scrimshaw.

So far there has been very little disease pressure on cereals, although AICC agronomist Matthew Paterson is keeping a close eye on things, he adds.

“One site was a bit weedy, so we applied a total herbicide, which delayed drilling but it’s looking good now.”

In addition to managing key crop plots at Cereals, there will be extensive demonstrations by NIAB, which – at 128 plots - has more to see than ever before.

As well having all the key market leading and candidate cereal and oilseed rape varieties, NIAB will feature a large agronomy area comparing varying fungicide inputs, including new fungicides to be launched in 2020.

Grass weed control will also be under the spotlight, as will different rotation and cultivation systems, says Ros Lloyd, head of communications at NIAB.