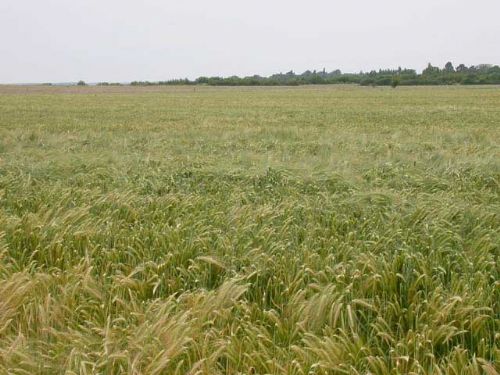 As parts of the UK have been officially declared to be in a state of drought, the announcement of a new EU-funded project which aims to speed up the development of drought and disease resistant crops is timely.

The five-year, three-million Euro project is set to revolutionise the way in which new plant varieties are produced. Molecular and computational techniques will be used to identify processes associated with the way drought and disease combine to make matters much worse than either alone. The project will also identify novel genes and biochemical pathways that improve plant resistance to these stresses.

The approach will be developed using a clover-like plant as a model. Under laboratory conditions, hundreds of these plants will be subjected to drought and/or infection with a type of soil fungus called Fusarium. The latest high throughput imaging technology will be used to monitor the performance of the plants without disturbing them. The information obtained from studying the model plant will then be applied to breeding new pea varieties. These new varieties will be compared with existing commercial crops, identifying those which perform better when challenged with a combination of Fusarium and drought. The best of the plants will undergo field trials at different sites across Europe.

The project is being led by The Food and Environment Research Agency (Fera) and involves 12 national and international partners. Dr Adrian Charlton, Project Leader and Head of Chemical & Biochemical profiling at Fera said "This project brings together the very best expertise in plant-based molecular biology and biochemistry in Europe and should lead to groundbreaking improvements in the techniques used for crop breeding. Fera scientists will be studying the biochemical profiles from the best performing plants and linking these back to the genes responsible using advanced computational techniques."

Researchers aim to develop principles and techniques that can be rolled out for crop breeding generally. Small to medium sized businesses should be able to use these to develop business opportunities. This should significantly reduce the time taken to breed new crop varieties that are more able to withstand the challenges commonly associated with climate change, such as extreme weather and changing incidence of pests and diseases.

Peas are being studied initially as they are well characterised genetically. Peas, like other legumes, have a key role as a sustainable source of protein in both human and animal diets. Importantly, peas can replace imported soybeans, which currently represent over 75% of feedstock protein in the EU. Farming of legumes has a low carbon footprint compared with other crop types and they also replenish nitrogen in the soil for the following crop. Legumes don’t require, and reduce the need in other crops for, nitrogen fertilisers which are a major source of greenhouse gases and farm energy consumption. Increased cultivation of drought and disease resistant legumes developed as a result of this project will be important in ensuring future food security, whilst mitigating the effects of climate change.

The soil fungus Fusarium is being used as an example of disease stress because this type of infection affects the way in which plants can mobilise water and so the damage it causes is compounded during drought conditions. The prevalence of this economically devastating fungal disease is predicted to increase due to climate change.