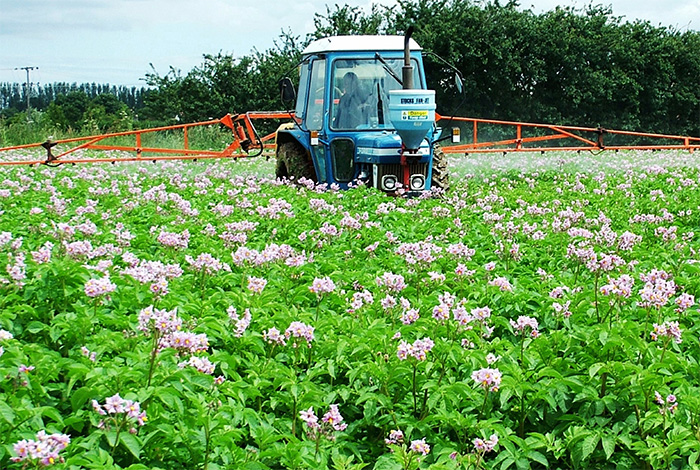 Potato crops are at very high risk from a serious blight epidemic this season and growers will need to begin control programmes early to keep the disease at bay, leading agronomy firm Hutchinsons warns.

The mild, wet winter and spring has created ideal conditions for the development of blight inoculum across the UK, says the firm’s Darryl Shailes, who says that some blight cases have already been confirmed by the Potato Council’s Fight Against Blight monitoring service.

“We haven’t had a harsh winter to knock back the inoculum or reduce the number of volunteers and with the current mild temperatures and frequent rain we are on for a pretty serious blight epidemic in all crops this year.”

Blight has already been confirmed in a potato dump in East Anglia and there has been blight recorded in glasshouse crops in Lincolnshire as early as anyone can recall, he says.

“There have already been two blight warnings by the end of May and growers will have to be extremely vigilant for blight. The pressure has been eased slightly by the fact that maincrop planting was delayed due to the wet weather, but nearly everything is now in the ground and is getting away well in the warm, wet soils.

“We’re certainly going to be starting weekly blight control sprays from late May/ early June in many cases, which will be a lot earlier than many growers are used to. Blight sprays normally start when the crop’s at the rosette stage.”

Potato crops grown under plastic are at particular risk from early blight and may also act as a source of infection for neighbouring crops when the plastic is removed and blight spores are released, says Mr Shailes.

The huge number of potato volunteers in crops elsewhere, along with outgrade piles are also key sources of infection that growers should remove at the earliest opportunity, he adds. “There’s really no excuse for allowing blight in through potato dumps.”

In terms of blight fungicides, Mr Shailes advises growers to begin blight spraying as soon as crops emerge where the disease is an imminent threat.

“Don’t think that just because the plant’s not very big then blight won’t be a problem. Blight that is allowed to infect young plants can be extremely damaging and means that you’ll be left chasing it all season.

“Going in with a robust fungicide strategy from day one avoids getting into this situation and means there may be the opportunity to cut back later in the season if conditions aren’t as conducive to blight development.”

“After the industry suffering huge problems with the lack of products for use in arable crops, it may be prudent for growers to get their choice of products ordered quickly to guarantee supply this season.”

Alongside blight, Mr Ferguson also warns growers to be extra vigilant for slugs this season, as the mild, wet weather has resulted in unprecedented numbers.

“Slug damage to tubers could be a major issue later in the year unless the weather turns exceptionally dry this summer. Slugs have continued breeding throughout the winter and vigilance will be paramount.”