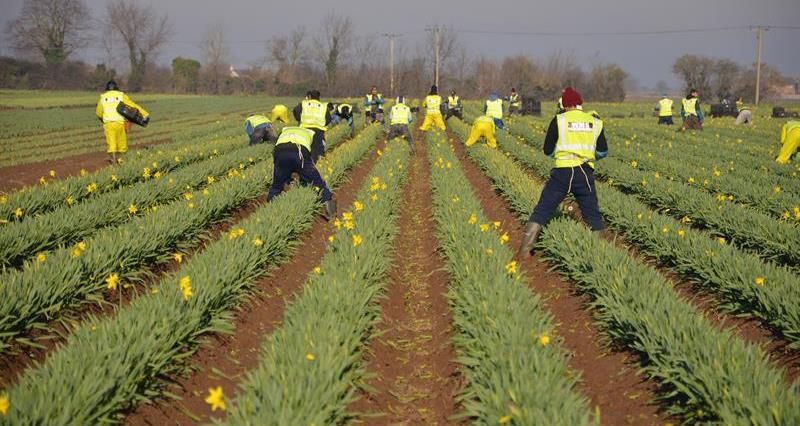 Since the vote to leave the EU, farm groups have campaigned on the reliance of the industry on non-UK workers

The NFU has expressed dismay at the government's intention to end freedom of movement in the event of a no-deal Brexit as farmers won't have access to 'vital' overseas workers.

Freedom of movement for EU citizens will end even without a replacement system if the UK leaves the EU with no-deal, according to reports.

The previous government under Theresa May promised a gradual transition away from freedom of movement rather than a sudden stop.

This significant toughening of the immigration strategy has unsettled the farming industry.

The NFU is challenging the government to ensure farming businesses can still access migrant labour.

The Home Office said that arrangements for people coming to the UK for longer periods of time and for work and study ‘will change’ in the event of no-deal.

Details of improvements to the previous government’s plans for a new immigration system are ‘being developed’, it added.

With just two months until the UK leaves the EU, the NFU has expressed concern at the development.

The union said there is now no policy in place that will enable farmers and growers to recruit from outside the UK.

A letter has been sent to Home Secretary Priti Patel expressing the need for urgent clarity about how EU workers can come to the UK post-Brexit.

It reiterates the 'crucial role' such workers play in 'delivering safe, traceable and affordable food' to the British public.

Farmers are also being urged to ask their MPs to write to Ms Patel, calling for a transition measure, such as the Leave to Remain process, to be reinstated.

If no transition measure is forthcoming that provides assurance, the NFU is calling for the introduction of a new immigration policy that allows businesses to recruit the workers they need for both temporary and permanent positions.

For horticulture, calls have been made for the expansion of the Seasonal Workers Pilot scheme to enable recruitment for the autumn and Christmas period.

The NFU added that farmers may also be able to mitigate some of their shortages for next year by supporting their workers to apply for the EU settlement scheme.

While this scheme is designed to offer EU workers permanent residency in the UK, it can also be used to enable seasonal workers the right to come to the UK for up to 5 years.

Farmers have seen a sharp decline in the number of seasonal workers since the UK voted to leave the bloc.