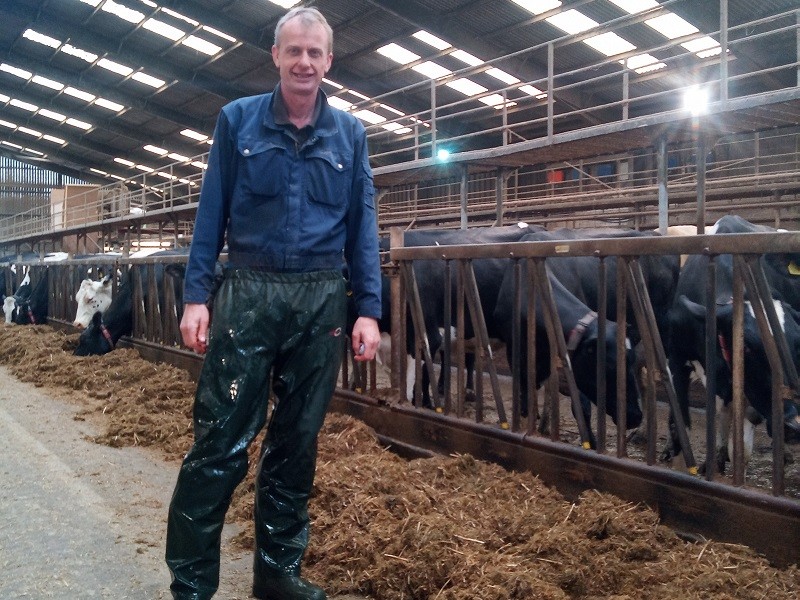 David Smurthwaite, who manages Westertown Farm, said he had battled problems with pneumonia which affected his 300-head Holstein dairy herd

A Scottish farm has significantly reduced incidences of mycoplasma and calf mortality by using a new multi-strain vaccine.

Mycoplasma bovis is a common cause of pneumonia in calves, and can also cause mastitis, arthritis and otitis in older animals.

According to Graeme Fowlie, director at Meadow Vets, given that the disease cannot be treated by common antibiotics, prevention is better than cure.

And with a multi-factorial disease like mycoplasma bovis, he said it was important to adopt a multi-pronged approach to tackle it.

Meadow Vets have worked with farm manager David Smurthwaite for several years, so when he joined the team at Westertown Farm six months ago, he brought Mr Fowlie on board.

Having had previous experience of mycoplasma bovis from his work in beef, Mr Smurthwaite was aware of the clinical signs of the disease.

“I looked after 700 suckler cows previously and we finished everything ourselves," he said, "Mycoplasma was rearing its head there and through that I found out that Graeme had been doing some work on the disease and had a vaccine.”

The disease is the most common cause of calf pneumonia in the country, and appears to be becoming more widespread, Mr Fowlie explained.

The multi-strain bacterin-based vaccine – a first for the UK - was developed in the US and he was able to secure a license to import it, so it can now be prescribed in the UK under the Cascade system.

At Westertown Farm – which comprises a 300-head Holstein dairy herd – there had been ongoing problems with pneumonia.

“Graeme delved deeper into it and he found mycoplasma was definitely an issue,” said Mr Smurthwaite, “The mortality was poor; we were losing too many calves before they were weaned.”

The cows calve all year-round, producing milk for the Mackie’s ice cream factory, based on the same site. They are milked with five Lely robots and the farm is aiming for a level production profile.

“The ice cream market can be a bit seasonal, but we try to keep constant production all year round so we know what milk we need to buy in,” said Mr Smurthwaite.

He began using the vaccine in October 2019 with positive results: “The vaccine has definitely had an impact, the mortality has dropped off and we’re getting less clinical signs.

"We’ve definitely seen an improvement in the health status of the calves.”

Mr Smurthwaite has been vaccinating the cows prior to calving to give calves passive immunity through the uptake of colostrum. He then follows that up by vaccinating the calves at four to five weeks old.

“Our clinical cases have dropped off, we’re treating less calves and when we do treat them they are responding. That is the key thing – we are definitely getting an improvement," he said.

"Historically, even if we had treated them a few times, they would still die. We’ve been able to save money by reducing use of antibiotics too. The farm is a healthier place off the back of the vaccine.”

However, vaccination is only ever one part of the answer, explained Mr Fowlie: “It’s important to adopt a holistic approach, guided by your vet, including stringent biosecurity measures.”

To this end, Mr Smurthwaite has been working to keep calves in batches for vaccinations and for biosecurity - enabling them to disinfect the sheds between groups.

But the farm plans to carry on using the vaccine in its programme: “We’re going to vaccinate the cows four weeks before calving to make sure we have the colostrum cover and inject the calves on the four-week mark,” he said.

Mycoplasma bovis needs to be the next target for eradication across the industry, warned Mr Fowlie. “I’m extremely hopeful that this vaccine will be the extra tool in the box that the industry is looking for.”