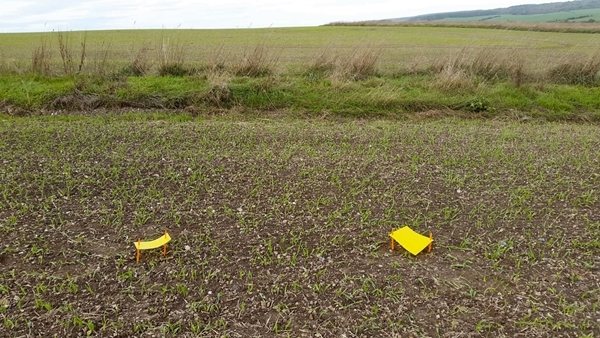 As part of the study, farmers were equipped with yellow sticky traps, mounted horizontally just above the crop

A new study has concluded that a simple field-based monitoring system, run by farmers, could help reduce the use of insecticide to tackle the cereals disease.

BYDV is the most economically important virus disease of cereal crops, with the potential to reduce yields by 30% in wheat and 75% in barley.

The virus is transmitted by cereal aphids that fly into the crop, with yields being most reduced by autumn infestations.

The threat is now higher following the ban on three neonicotinoid insecticides in 2019, which previously were applied as seed dressings to protect the young plants.

Farmers now have to spray pyrethroid insecticides that are also toxic to the beneficial insects in the crop and have the potential to contaminate waterways.

The pilot study, funded by the AHDB and run by the Game & Wildlife Conservation Trust (GWCT), has shown that field-based monitoring to count aphid numbers has the potential to predict the risk of BYDV transmitted by cereal aphids in the autumn.

Better understanding of aphid infestations could help farmers improve both the targeting and the timing of insecticide applications so that they hit the aphids before they have a chance to spread within the crop.

It could also help reduce insecticide usage as not all fields are infested with aphids and typically only about 5% carry the virus.

Aphids are difficult to observe in the crop. The GWCT’s Farmland Ecology Unit and Agrii tested the practicality of field-based monitoring by equipping 7 farmers with yellow sticky traps – 20x20cm of card coated with wet-stick mounted horizontally just above the crop. Yellow is known to be attractive to aphids.

The farmers were asked to trial the traps for a month, changing them every week. They were given only a basic aphid identification guide to assess current levels of expertise and whether or not further training materials would be needed.

Five of the participants underestimated the number of aphids by 50-89%, while two overestimated by 80-82%. Despite this, their assessments were good enough to detect the same changes over time as the expert’s assessments of the aphid numbers.

Dr John Holland, head of GWCT’s Farmland Ecology Unit, said: “The participants liked the simplicity of the approach and would be willing to use it, but wanted better training in aphid identification in future.”

The team was also keen to understand whether landscape composition, boundary type and tillage methods affect aphid immigration into crops.

Traps were deployed by the farmers in field headlands and mid-field in 41 fields. Sticky traps were also deployed in the headland area and mid-field of 15 other fields located in landscapes with different proportions of grassland.

“In both studies, different cultivation systems were used to establish the crop (direct drilling, minimum tillage and ploughing) allowing us to investigate their impact,” said Dr Holland.

“We found at least three times as many flying aphids in the headland area compared with the field centre in both studies, and especially next to tall boundaries, indicating that wind currents determined aphid immigration patterns within fields."

The scientists found that the type of tillage had no impact on levels of aphid immigration. By studying a range of landscapes, they found more aphids where there was a higher proportion of grassland with a 1km radius of the sampled field.

“We found considerable variation in aphid numbers between fields (24% had none), even on the same farm, which confirms the merits of field-based monitoring to reduce insecticide use,” Dr Holland said.

He said further research was needed to confirm the impact of a field-based monitoring approach on whole field populations and BYDV infection, accommodate pesticide application restrictions and investigate the threat to invertebrates overwintering in the field boundary.