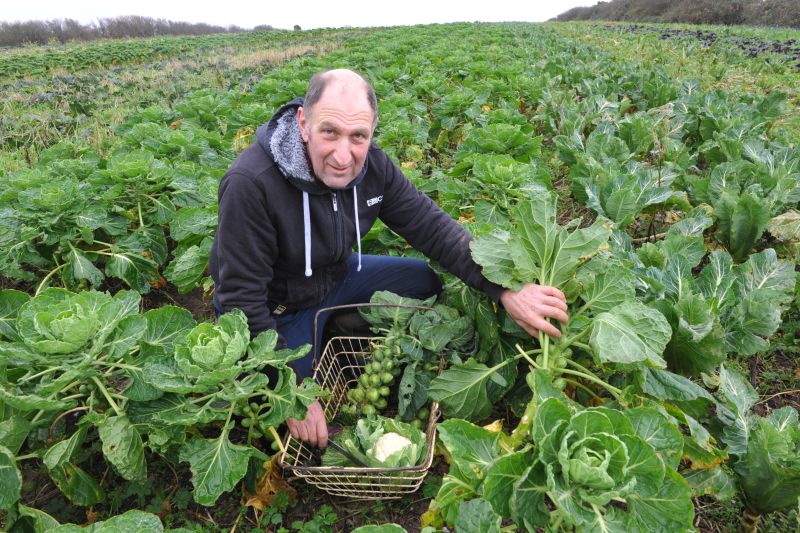 A Pembrokeshire farmer who diversified into growing organic crops is seeking a new and younger business partner to work alongside him, and could even take over the reins long-term.

Pembrokeshire-born second-generation farmer Romeo Sarra decided many years ago that unlike his father, he had no intention of devoting his working life to dairying.

He slowly began to reduce livestock numbers, gave up milking and began to diversify into horticulture.

For the last 24 years, Mr Sarra and his family have been producing organic field-scale vegetables and although business is booming, he’s now looking forward to scaling back his day to day involvement in the enterprise.

With an eye to the future, he has turned to the Welsh Government's Farming Connect’s Venture programme to help him find a new younger business partner for Peepout Organic Farm.

Venture matches up farmers and landowners wanting to step back from the industry with those seeking a foothold or new business opportunity.

Through the programme, Mr Sarra is hoping to find an individual who will be happy to work alongside him, on a trial basis to start with, with a view to taking over the reins long term.

In the early 90s, Mr Sarra purchased a 40-acre smallholding at Portfieldgate near Haverfordwest, with the intention of growing cereals and potatoes.

A few years later, he decided to convert the farm to organic. This winning combination has resulted in him growing, packing and selling a wide range of organic root crop vegetables, brassicas and summer salad crops to an ever-growing customer base of niche buyers.

He currently sells mainly through bespoke box schemes, both locally and on the M4 corridor, offering both delivery and collection options and he also sells larger quantities to a local Pembrokeshire wholesaler.

He said: “I’ve steadily developed the business year by year, building up a regular customer base of individuals who value the unrivalled taste and provenance of fresh organically grown local farm produce.

“I provide my customers with an experience above and beyond that which large-scale retail giants can offer but at a competitive price.”

Having realised early on that he didn’t want to either compete or deal directly with large scale packers and supermarkets, which he says would have given him little say over the crops grown or pricing, Mr Sarra’s early sales strategy was to focus on promoting the ‘healthy, tasty and good value’ angle, which was largely down to word of mouth and personal recommendations.

In recent years however, social media has transformed his approach to marketing, freeing up his time to grow the business and offer an even wider range of produce.

“We now rely mainly on our Peepout Organic Farm Facebook page where we regularly upload photographs and price lists of everything available, which varies according to the time of year and weather,” he said.

Today, Mr Sarra manages the land on a rotational basis, and says that up to ten acres of ground is now given up to various potato types, carrots, parsnips, swedes and other root crops, together with brassicas including cabbage, cauliflower, broccoli and curly kale.

Summer crops include various peas and beans including French and runner beans, salad crops, courgettes, sweetcorn and many more.

Mr Sarra has already purchased two large scale poly-tunnels and says that once he has introduced a new partner to the business and these are erected, they will significantly extend the growing season throughout the year.

Facilities for office space and packing can be made available and horticulture-related machinery will be provided. He believes the new partner should be able to hit the ground running and says there is plenty of scope for developing the business further.

He said: “The person I’m looking for will need to be conversant with social media and have some experience of horticulture and ideally of growing in polytunnels, as the work will involve every element of the growing and selling process from production through to harvesting, packing marketing and distribution.”

On hand to offer as much or as little guidance and support as and when required, he has also said that he’s open to working with a more experienced grower, who may have their own ideas and proposals.

He said that more available land could be brought into the Venture agreement if, after a trial period, both parties felt that would be advantageous.

Accommodation is not presently available on the premises so this opportunity would suit someone either living in the area or willing to relocate. Mr Sarra says there are numerous reasonably priced options available locally.

If you are interested in a joint venture opportunity with Mr Sarra or require further information about the programme, contact Delyth Jones, Venture Officer for South Wales on 01970 631422 or email delyth.jones@menterabusnes.co.uk.