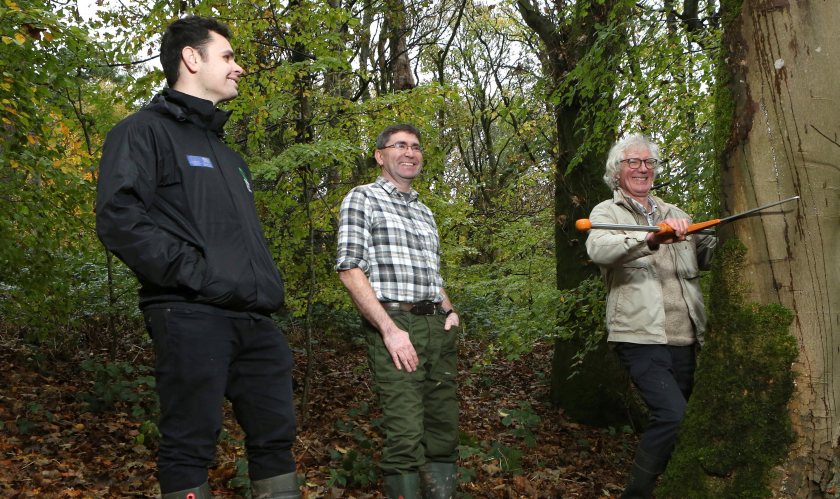 Plas yn Iâl, in Llandegla, near the Horseshoe Pass, is a 187-acre upland sheep farm which has been in Huw’s family for three generations.

More than 25 acres of mainly deciduous woodland had been left unmanaged for more than 80 years, representing around 18% of the total farmstead.

Some areas were closed canopy and dark, which was impeding any new growth or opportunities for regeneration.

Huw and Bethan, both advocates of sustainable farming who were keen to increase biodiversity on the farm, wanted to improve their knowledge and skills in order to pro-actively manage the woodland in a productive and sustainable way.

In 2014, the couple installed an 80kWth wood-chip boiler, an investment which has enabled them to heat not only their historic family home, but an integrated self-contained accommodation unit as well.

Then, focusing primarily on the conservation and sustainability angles, came the challenge of how best to manage and regenerate the woodland.

Knowing he would need specialist advice, Huw booked a place at a Farming Connect event in Bala on sustainable woodland management, just before the pandemic in 2020.

“I heard from so many sector specialists who opened my eyes to the opportunities for addressing our environmental concerns," said Huw.

"I also received valuable advice on reducing energy costs further and longer-term, suggestions on how the woodland could generate income too."

One of the speakers at that event was approved Farming Connect mentor Phil Morgan from Trawscoed, an experienced forester and woodland expert.

Around two years after their fully-funded mentor/mentee relationship began, Huw says he has the skills and knowledge he needs to place the woodland in an improved management condition.

“We have turned a liability into an asset and we are on course to becoming energy self-sufficient," Huw said.

“We have increased the farm’s biodiversity and I’m optimistic we will soon secure a felling licence in order to implement the continuous cover forestry plan (CCF) which Phil helped us formulate.”

The focus site project at Plas yn Iâl undertook both ground and drone surveys to create one CCF management plan.

The surveys showed that the woodland volume is increasing at an estimated volume increment of approximately 90 tonnes of timber per year.

Their wood fuel demand is around 30 tonnes per year, which means introducing CCF as a silvicultural management technique could provide 60 tonnes of saleable timber annually.

Mr Morgan explains that CCF means individual trees are extracted to maintain permanent woodland cover while allowing the production of commercial timber, as well as increasing biodiversity and carbon sequestration while simultaneously regenerating the woodland.

He said: “CCF is a carbon-efficient forest management system which can provide significant economic, environmental and social benefits for many farmers, particularly where natural regeneration is the main recruitment method.”

The timber Huw and Bethan fell already creates woodchip for their own biomass boiler but as the woodland regenerates further, they hope to have an increased volume of timber to either sell on or process for a new woodchip bedding enterprise.