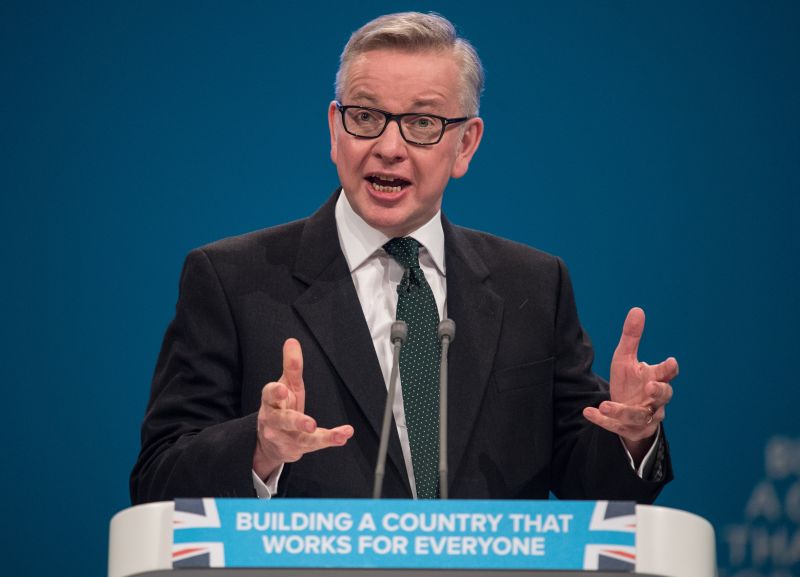 The farming industry has told of its concern over Defra Secretary Michael Gove's commitment to a 'green Brexit', one which focuses on animal welfare and the environment over food production.

The UK will be a beacon of higher animal welfare and environmental standard once the UK leaves the EU, Mr Gove explained yesterday (5 December) at a meeting.

The Defra Secretary supported calls from the Conservative Animal Welfare Foundation (CAWF) and Conservative Environment Network (CEN) to improve farm animal welfare and to protect the environment as the UK leaves the European Union.

Both organisations said that whilst there are risks to be mitigated, there are also "huge opportunities" to be had for forging "world leading" approaches to policy.

The joint event on Tuesday welcomed recent animal welfare and environmental protection announcements, such as backing for the ban on neonics which campaigners say harm bees, introduction of mandatory CCTV in all slaughterhouses and the restriction on the live exports of animal for slaughter.

Patron of CAWF Sir Roger Gale MP hosted the groups at the House of Commons attended by Ministers, advisers and representatives from across the environmental and animal welfare sectors.

Michael Gove told the meeting: “This Government is committed to the very highest animal welfare and environmental standards.

“We have already proposed primary legislation to increase maximum sentences for animal cruelty from six months to five years, and the creation of a new statutory, independent body to uphold environmental standards. Our recent ban on microbeads, which harm marine animals has been hailed as the strongest in the world.

“Once we have left the EU there is even more we could do. We hope to crack down on puppy smuggling and are looking at ways to restrict the live exports of animal for slaughter.”

Sir Roger added: “This is the most impressive statement that I have in 34 years in the House of Commons heard from any Minister of any Government in support of animal welfare. It was amazing.”

But the farming industry has concerns that Michael Gove's commitment to a 'green Brexit' favours the environment at the expense of food production.

One of the issues campaigners have urged Mr Gove to tackle is restricting live exports, which has worried the sheep industry.

The National Sheep Association (NSA) has urged policy makers to exercise "extreme care" when considering calls to restrict live exports, fearing they could cause "unintended and unnecessary" consequences for no welfare gain at all.

“Banning live exports from the UK would stop what can be a very direct trade from the South East of England to Northern Europe with journey times that can be less than some internal UK trips,” Mr Stocker explained.

“It has even been suggested we ban live animals travelling across water, something which causes no welfare problems. Banning it would finish many of our island farming communities and trade within the UK would be discriminated.

“Exporters of breeding animals comply with strict regulations and we should aim for all animals to be treated in this way. The emphasis should be on a joint effort from Governments, farming organisations and welfare campaigners to ensure EU regulations are properly adhered to.

“If we can’t rely on other EU states to do this effectively then exploring the potential of UK assured routes to ensure regulatory compliance is something I would welcome.”

On the topic of mandatory CCTV in all slaughterhouses, which will be introduced next year, a leading meat body has warned that it could lead to difficulties employing staff in the future.

Defra Secretary Michael Gove announced the plans on 12 November, and said the department has received an "extremely positive" reaction from the agricultural industry, welfare groups and the public.

However, the Association of Independent Meat Suppliers (AIMS) said "the devil will be in the detail".

Head of policy at AIMS Norman Bagley said: “To permit the Food Standards Agency (FSA) to review months of recordings of staff who have not consented to being filmed and initiate retrospective prosecutions is unprecedented. Similar controls over staff in hospitals and care homes would never be contemplated so there is no justification for discrimination of abattoir workers.

The UK government has also overturned its previous convictions on neonicotinoids, and now say an outright ban is needed due to their supposed harm to pollinators.

The decision reverses the government’s previous position on the world’s most widely used insecticides.

“Farmers rely on bees to pollinate crops and have planted around 10,000 football pitches of flower habitat across the country to support a healthy bee population and give them a good home,” Dr Hartfield said.

“We deeply regret the decision the Government has taken on this issue as we don’t believe the evidence justifies this abrupt change in policy. We will continue to speak to the Government about how the impact of the decision can best be mitigated so that farmers can maintain sustainable and productive cropping systems.”

Multinational chemical giant Bayer reacted strongly to the announcement, calling it a "bizarre" decision and one that "flies in the face of sound science".

It said the decision is a "kick in the teeth" for British agriculture.