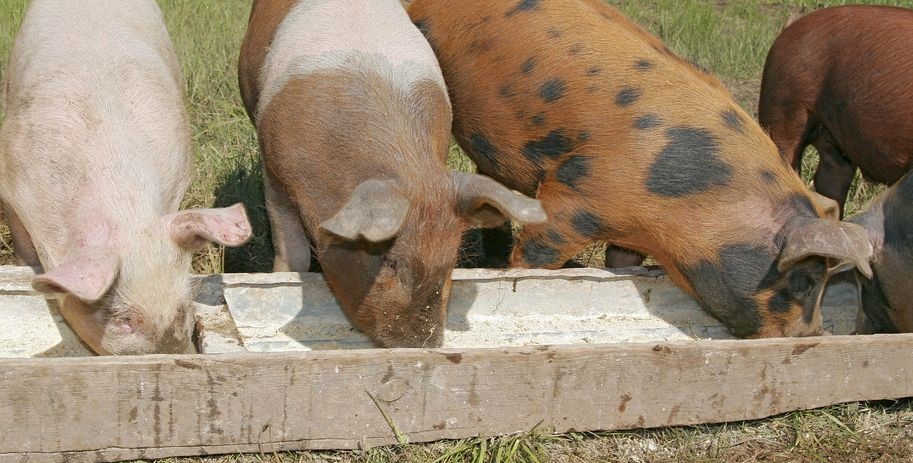 A new study shows that if the European Union lifted the pigswill ban imposed following 2001's foot-and-mouth disease epidemic, and harnessed technologies developed in East Asian countries for 'heat-treating' our food waste to safely turn it into pig feed, around 1.8 million hectares of land could be saved from being stripped for grain and soybean-based pig feed production - including over quarter of a million hectares of Brazilian forest and savannah.

While swill-feeding was banned across the EU in 2002 following the foot-and-mouth outbreak - thought to have been triggered by a UK farmer illegally feeding uncooked food waste to pigs - other countries, such as Japan, responded by creating a highly regulated system for safely recycling heat-treated food waste as animal feed.

In recent years, conservationists have called for a reversal of the law; in the UK a high-profile campaign, the Pig Idea, has gained the backing of celebrity chefs. However, pig industry groups have expressed reservations.

However, researchers from the University of Cambridge this week described the EU ban as a 'knee-jerk reaction' saying that it no longer makes sense when East Asian countries have demonstrated that food waste can be safely recycled. The models in a study conducted by the University show that pigswill reintroduction would not only decrease the amount of land the EU pork industry requires by 21.5%, but also cut in half the ever-increasing feed costs faced by European pig farmers.

Researchers describe swill as a feed which is commonly used in other parts of the world, one that could save a huge amount of global resources, and provide an environmentally sound recycling solution to the estimated 102.5 million tonnes of food wasted in the EU each year. Over 35% of food waste is now recycled into animal feed in Japan, where swill-fed 'Eco-pork' is marketed as a premium product.

"Following the foot-and-mouth disease outbreak, different countries looked at the same situation, the same evidence, and came to opposite conclusions for policy," said Erasmus zu Ermgassen from the University of Cambridge's Department of Zoology, who led the study, published on Wednesday in the journal Food Policy. "In many countries in East Asia we have a working model for the safe use of food waste as pig feed. It is a highly regulated and closely monitored system that recycles food waste and produces low-cost pig feed with a low environmental impact."

The researchers examined data about the current land use of EU pork, the availability of food waste in the EU, and the quality and quantity of pork produced in feed trials that compared pigswill to grain-based diets, to produce a model of how much land could be saved if the pigswill ban was lifted.

Some 21.5 million tonnes of pork, around 34kg of pork per person, are produced in the EU each year. Livestock production accounts for approximately 75% of agricultural land worldwide - with most of this used to produce animal feed. For EU pork, much of the environmental burden stems from the farming of soybean meal, which takes up in excess of 1.2 million hectares of land across South America.

As swill is much cheaper than grain and soybean-based pig feed, reintroducing swill feeding could reduce costs faced by EU pig farmers by 50%, say the researchers.

Opposition to swill ‘based on incorrect assumptions’

Most objection to swill feeding in the EU stems from concerns about safety, and the sentiment that feeding human food waste to pigs is unnatural. But zu Ermgassen argues that those concerns are largely based on incorrect assumptions.

"Pigs are omnivorous animals; in the wild they would eat anything they could forage for, from vegetable matter to other animal carcasses, and they have been fed food waste since they were domesticated by humans 10,000 years ago. Swill actually provides a more traditional diet for pigs than the grain-based feed currently used in modern EU systems," Ermgassen said.

"A recent survey found that 25% of smallholder farmers in the UK admit to illegally feeding uncooked food waste to their pigs, so the fact is that the current ban is not particularly safe from a disease-outbreak perspective. Feeding uncooked food waste is dangerous because pigs can catch diseases from raw meat, but a system supporting the regulated use of heat-treated swill does not have the same risks," he said.

With the demand for meat and dairy products forecast to increase 60% by 2050, reducing the environmental footprint of current systems of meat production will become increasingly critical.

Zu Ermgassen points out that economic and environmental concern is driving a reassessment of EU animal feed bans that were put in place in the 2000s, as well as attempts to recycle food waste more effectively. The EU is currently looking into repealing bans on feeding waste to animals, including PAP (Processed Animal Protein) like pig and poultry products for fish feed and reintroducing insects as pig and poultry feed.

"The reintroduction of swill feeding in the EU would require backing from pig producers, the public, and policy makers, but it has substantial potential to improve the environmental and economic sustainability of EU pork production. It is time to reassess whether the EU's blanket ban on the use of food waste as feed is the right thing for the pig industry," said Ermgassen.