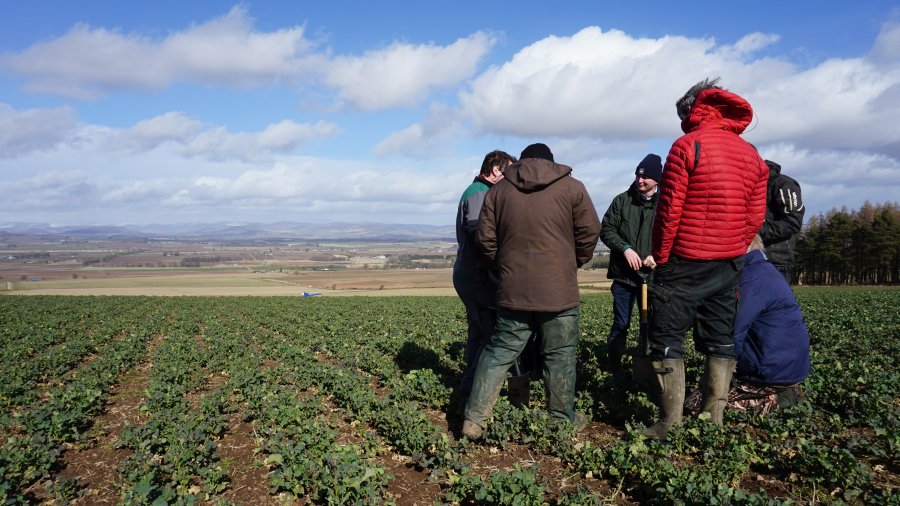 Scottish farmers are getting their heads together on one of the most fundamental concerns – how to revitalise soil health to achieve more sustainable farming and profit.

The Soil Regenerative Group has been created to explore which techniques, treatments, crops and rotations best establish resilient soils and how to integrate these into profits.

From growing linseed to broadcasting seed on the day of harvest, grazing sheep on oilseed rape to direct drilling, each farmer is experimenting differently and is at varied stages of adopting “regenerative”, or conservation, farming.

The group is a Farming for a Better Climate (FFBC) project facilitated by SAC Consulting, part of Scotland’s Rural College (SRUC).

Ideas are explored through regular group discussion and contact on WhatsApp, which the group considers as the ideal tool for frequent visual and video updates.

All are sharing their own learnings and guiding others both in the group and the wider farming community on what has and hasn’t worked.

Facilitator Zach Reilly, of SAC Consulting, described it as a great example of peer-to-peer learning: “The open conversations and experiences of these five farmers is the heart of its success.

"They are all trying different and interesting methods and, although across a mix of farming enterprises, there is overlap and the real value is that they are all learning from each other.

"They all have a shared ambition to rebuild soil organic matter and restore degraded biodiversity and to make it financially feasible."

With mixed, arable and one potato enterprise, the focus for all has been to minimise soil disturbance, maximise crop diversity, keep the soil covered and a living root in the system and to bring livestock back into the rotation.

On his 121ha arable unit at Moss-side of Esslie near Fettercairn, Douglas Ruxton has focused on regenerative farming since 2012.

Drainage was a priority and after extensive research, he switched to direct drilling. He has noticed an increase in worm population which promotes the soil structure and drainage, as well as boosting nutrients

An added benefit is the reduced time on his tractor and associated costs of fuel and wear. He said: “Many of the processes we are looking at were the norm in the past but in an industrial era we have become reliant on heavy machinery and chemical inputs.

"It’s becoming clear that these have their downfalls and if the next generation is going to profit from the soil as well, we need to rebuild it.

"Soil is our greatest asset and we need to get the basics right before we go high tech,” Mr Ruxton said.

Hugh Black, an arable and potato farmer at Backboath near Carmyllie, has the added challenge of restoring soil after the disruption of cultivating potatoes.

He is experimenting with companion cropping, putting faba beans in with oilseed rape, and is trying to establish clover in his winter wheat crops to provide a constant supply of nitrogen and ground cover to lock in moisture.

As well as satisfactorily trialling a Claydon drill for beans, a new addition to the rotation, he has put whole fields into cover crop to improve structure and nutrients.

James Hopkinson at Cloud Farming and Arable Ventures near Forfar is increasing crop diversity by growing linseed and beans to lengthen his rotation, as well as trialling different cover crops and livestock grazing.

He said restoring soil was the right thing to do but the challenge was doing that profitably: "Cover crops, for example, have an establishment and seed cost," he said.

"However, if the soil structure improves and we see better drainage in a wet year or it holds the moisture in a dry one, then it is worth it.

"Equally if we can decrease our inputs, we save costs. Nature works slowly so it will be some time before we know what will be most effective but experimenting with various techniques and seeing greater biodiversity and soil resilience is really rewarding.

"We have created four and six meter diverse species margins around all of our fields to encourage natural predation and biodiversity which is a cost we think is worth paying but farmers will need support to adopt this kind of farming.”

Ross Mitchell, berry and arable farmer at Castleton at Laurencekirk, is experimenting with reducing soil compaction through min-till and has been trying different methods of establishing green cover crops.

On his mixed farm at Leitfie near Alyth, Ben Barron moved away from traditional ploughing to direct drilling four years ago and is seeing an increased number of earthworms and improved soil structure.

As well as introducing livestock into the rotation, his focus is on trialling crop mixtures and inputs, and also keeping the ground constantly covered.

Soil samples from each farm were sent to six different laboratories at the start of the project and the soils will be tested again later this year.

The project is at the end of the first year of a three-year initiative.