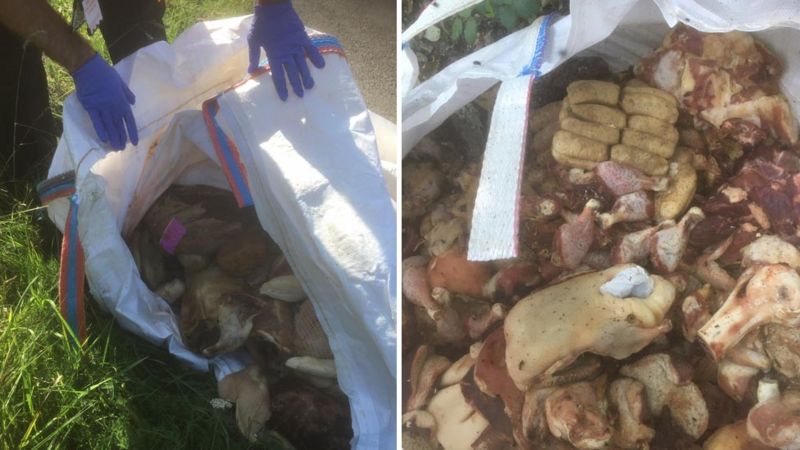 The meat had begun to rot and presented a serious health hazard (Photo: Dorset Council)

An investigation has begun after fly-tippers dumped two tonnes of cooked and uncooked rotting meat in the Dorset countryside.

Several white bulk bags containing meat have been found on land in the villages of East Stoke and Bere Regis, near Wareham.

Dorset Council said the bags were so heavy that lifting equipment was needed to remove them.

The meat had begun to rot and presented a serious health hazard.

Officers from Dorset Council’s Waste Enforcement team are now looking for those responsible.

Given the amount of meat dumped, they suspect the waste to have come from a commercial source or someone who paid to dispose of the waste on their behalf.

Members of the public reported the dumped waste to the council, which dispatched Enforcement Officers to investigate as well as a clean-up crew.

Evidence found at the scene of one fly-tip in East Stoke was examined and linked the meat to several abattoirs based in Bedford, Northern Ireland and Wales.

Council enforcement officers said slaughterhouse workers and butchers had been helping them with their inquiries.

They said added that it was 'unusual' for waste of this kind to be illegally dumped in Dorset.

However, the pandemic may have been a factor as many businesses have struggled to sell and use up existing stock, especially those in the event catering sector.

Councillor Jill Haynes said: "Investigating and clearing up something as disgusting as rotting meat is something our employees simply shouldn’t have to do.

"Fly-tipping is a criminal offence, punishable of fines of up to £50,000 – or 12-months imprisonment if convicted in a Magistrate’s Court.

"The offence can attract an unlimited fine and up to 5 years imprisonment if convicted in a Crown Court."

It follows a series of high profile fly-tipping incidents which recently affected farmers and landowners across the UK.

In August, a Lanarkshire farmer had no choice but to pay £2,000 to clean up two tonnes of raw meat waste which was dumped on his land.