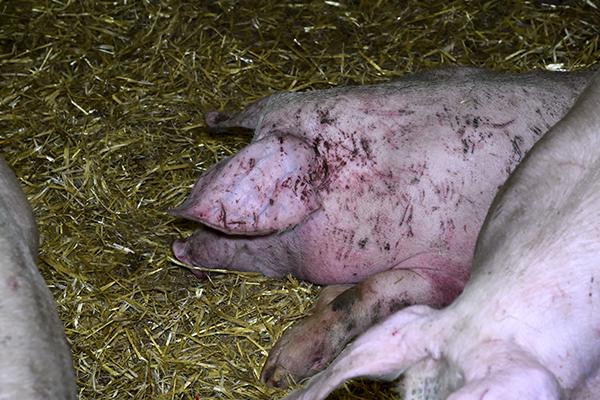 The National Pig Association said the actions of the workers depicted in the footage are "indefensible" (Photo: Animal Equality)

An organisation which represents pig farmers has labelled undercover footage showing workers violently mistreating pigs at one of the UK's largest pig producers as "abhorrent".

The footage was taken in April via a number of secret cameras left on Fir Tree pig farm in Lincolnshire, following an anonymous tip-off to animal welfare charity Animal Equality.

The farm is owned by Elsham Linc – one of Britain’s largest pig producers.

The footage shows workers kicking pigs in the face and head, often violently and repeatedly, in over 100 incidents.

The workers leave a ‘downed’ pig without veterinary care for 48 hours before shooting it. Workers are seen laughing about the abuse and swearing at pigs.

When the business became aware of the footage, it initiated an immediate investigation and subsequently the four staff involved in the video footage have had their employment terminated.

The National Pig Association (NPA) has reacted to the footage, and told Sky News that as an organisation it does not tolerate or condone violence towards animals in any way.

“We are clear that the actions of the individuals depicted in the footage are indefensible and should be treated accordingly,” the NPA said.

“Such behaviour is abhorrent to all pig farmers and the business involved, which has acted responsibly and immediately by terminating employment of the members of staff following a thorough investigation and is cooperating fully with the authorities.

“The NPA will take the lead in investigating what further measures can be put in place to prevent any similar incidents from occurring on British pig farms.”

The Godfrey family, who own the farm, along with the company Elsham Linc Ltd, also told Sky News: "We are shocked by the actions of those involved as their abhorrent behaviour does not represent our business. We are a family run farm where the care and welfare of our pigs is paramount.

"We have been able to identify the four individuals in the film and following an immediate investigation their employment has been terminated."