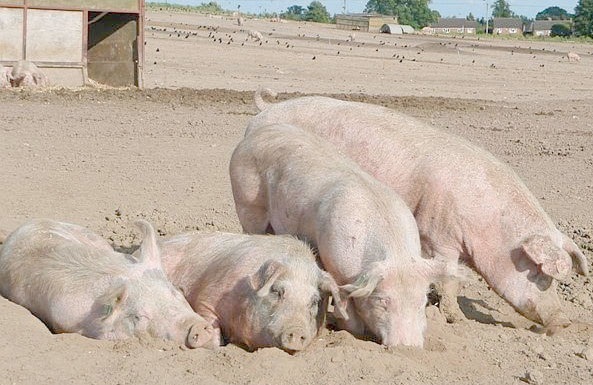 A new study claims that pigs were harmed by the consumption of feed containing genetically modified (GM) crops.

GM-fed females had on average a 25% heavier uterus than non-GM-fed females, a possible indicator of disease that requires further investigation. The level of inflammation in stomachs was markedly higher in pigs fed on the GM diet.

The research was conducted by collaborating investigators from two continents and published in the peer-reviewed Journal of Organic Systems. The feeding study lasted more than five months, the normal commercial lifespan for a pig, and was conducted in the US. The pigs were slaughtered at the usual slaughter age of over 5 months, after eating the diets for their entire commercial lifespan.

168 newly-weaned pigs in a commercial piggery were fed either a typical diet incorporating GM soy and corn, or else (in the control group) an equivalent non-GM diet. The pigs were reared under identical housing and feeding conditions. They were slaughtered over 5 months later, at the usual slaughter age, after eating the diets for their entire commercial lifespan. They were then autopsied by qualified veterinarians who worked “blind” – they were not informed which pigs were fed on the GM diet and which were from the control group.

Lead researcher Dr Judy Carman, adjunct associate professor at Flinders University, Adelaide, Australia, said: "Our findings are noteworthy for several reasons. First, we found these results in real on-farm conditions, not in a laboratory, but with the added benefit of strict scientific controls that are not normally present on farms.

"Second, we used pigs. Pigs with these health problems end up in our food supply. We eat them.

"Third, pigs have a similar digestive system to people, so we need to investigate if people are also getting digestive problems from eating GM crops.

"Fourth, we found these adverse effects when we fed the animals a mixture of crops containing three GM genes and the GM proteins that these genes produce. Yet no food regulator anywhere in the world requires a safety assessment for the possible toxic effects of mixtures. Regulators simply assume that they can't happen."

Iowa-based farmer and crop and livestock advisor Howard Vlieger, one of the coordinators of the study, said: "For as long as GM crops have been in the feed supply, we have seen increasing digestive and reproductive problems in animals. Now it is scientifically documented.

“In my experience, farmers have found increased production costs and escalating antibiotic use when feeding GM crops. In some operations, the livestock death loss is high, and there are unexplained problems including spontaneous abortions, deformities of new-born animals, and an overall listlessness and lack of contentment in the animals.

“In some cases, animals eating GM crops are very aggressive. This is not surprising, given the scale of stomach irritation and inflammation now documented. I have seen no financial benefit to farmers who feed GM crops to their animals."

Gill Rowlands, a farmer based in Pembrokeshire, Wales who is also a member of the campaign group GM-Free Cymru, said: "This is an animal welfare issue. Responsible farmers and consumers alike do not want animals to suffer. We call for the rapid phase-out of all GMOs from animal feed supplies."

Claire Robinson of the campaign group GMWatch said: "Several UK supermarkets recently abandoned their GM-free animal feed policies, citing lack of availability of non-GM feed. We call on the public to visit the new citizens’ action website gmoaction.org, where they can quickly and easily send an email to the supermarkets asking them to ensure their suppliers secure certified GM-free animal feed. This will mean placing advance orders for GM-free soy from countries like Brazil."

Recently, free range egg producers were urged to be cautious before switching over to GM feed supplies.

Britain's biggest supermarket group, Tesco, appears to have followed Asda and Morrisons in abandoning the requirement for egg producers to use only non-GM feed, but statements issued by some retailers are less clear and Roger Gent, chairman of the British Free Range Egg Producers' Association (BFREPA), says producers should wait for the go-ahead from their packer before switching to GM.

"Things are still a little unclear at the moment," said Roger. "We are hoping to get more clarity over the coming weeks, some agreement between supermarkets and packers about what we can and cannot do. Things seem to be moving in the right direction, but we are still waiting to hear what is going to happen and producers should not rush out and start buying GM feed without getting the OK from their packer."

His words of warning were echoed by Chris Ramsey, supply base director with Stonegate, who said his company was currently trying to go through the process with its customers. "Once we have done that we will be trying to put it all together, but until then producers should wait for advice."

Barry Jackson at Eggsell said it was a "very difficult situation" at the moment because it was not clear. "Producers should definitely not do anything before speaking to their packer first. Don't be misled and jump in. These are difficult waters to navigate," said Barry, who said that all that Eggsell could do as a business was follow the Lion specification and provide what customers wanted. "As long as we have customers who stipulate GM-free, and we have, then that is what we will have to provide."

The latest flurry of activity began when Tesco issued a statement to say that it could no longer guarantee that the feed used by egg producers would be GM-free. In the statement, which was issued by the company's group technical director, Tim J. Smith, Tesco said that both poultry and egg suppliers had told the company that it had become increasingly difficult to guarantee GM-free feed. This was because of the increased production of GM soya and also the possibility of cross-contamination from GM soya when non-GM was available. "Because so much soya is modified and because of the way crops are planted, processed and transported, it is possible that non-GM soya crops contain low levels of GM soya. The new DNA testing regime we have put in place has identified that the risk of finding GM material in non-GM feed is increasing," said the Tesco director in the statement. "We could not continue with a promise we cannot be sure it is possible to keep and we want to be upfront about the changes we are making."

He pointed out in his statement that Asda and Morrisons had already abandoned the non-GM guarantee - something that was highlighted by BFREPA chairman Roger Gent earlier this year when he appealed to the remaining supermarkets to follow the lead of Asda and Morrisons. "This is not a requirement that is placed on other livestock sectors; it is only the poultry sector that is required to use non-GM," he said at the time. "Why? Is it something that consumers are demanding from the poultry sector? That is hard to believe when the same requirement is not demanded from other livestock sectors. The premium that we are having to pay for non-GM feed has grown from £40 per tonne to £100 per tonne and very soon we will not be able to obtain it at all. The growers are moving to GM crops and there will not be enough non-GM to meet the supermarkets' demand for us to use non-GM feed. They really do need to drop this requirement now."

Following the announcement by Tesco, Sainsbury's issued its own statement on GM feed content, although the statement left producers feeling uncertain about the supermarket's position. It said, “Whilst the latest scientific research and current Government advice is that GM ingredients do not present any risks to human health, we acknowledge the concerns of our customers and do not permit the use of GM crops, ingredients, additives or derivatives in any Sainsbury's own label food, drink, pet food, dietary supplements or floral products, this remains the case.

"We know that some of our customers also have concerns about products from animals whose feed may contain GM ingredients. Following an industry-wide availability issue it has become increasingly difficult to source guaranteed non-GM feed in the short term. So from this Monday, whilst our Taste the Difference and So Organic ranges will continue to be fed a non-GM diet, the fresh chicken sold in our by Sainsbury’s and basics ranges will be from birds that have been fed on feed which we cannot guarantee to be GM free. We have taken this decision in the obvious interests of animal welfare given the limited amount of other feed available at this time."

The statement continued, "The shortage is less immediate on eggs, but from around mid-May we anticipate that this will be in the same position and once again we will ensure our equivalent Taste the Difference, Omega-3 and So Organic ranges continue to be fed a non-GM diet to ensure our customers still have a choice.”

Sainsbury's seems to be advocating a policy of allowing GM content in feed for some ranges but not others - a policy that will inevitably need to be explored by packers before they are able to allow producers to source GM feed.

A statement by the Co-operative is also unclear for egg producers. Whilst it says it can no longer guarantee that its own-brand chicken and turkey has not been fed a non-GM diet because of the difficulty of sourcing GM-free feed, it says that its shell egg supplier is "continuing to look at ways to resolve this issue."

Martin Humphrey of Humphrey Feeds says that even when the position of the various retailers becomes clearer, it may take some time for the supply chain to completely switch over. Martin said that some compounders would have committed to buying non-GM soya from growers who had planted non-GM crops only at the request of the European market. "Making these seismic changes is not an overnight thing. It will take some time because of commitments already in place."

There is also a concern that supermarkets that do abandon the GM-free requirement may see it as an opportunity to cut costs. "Because of the reduction in feed price it could be that the supermarkets look to take three or four pence a dozen back from us," said Roger Gent. "We would look to argue the case, but we will have to wait and see how things develop."

In the mean time producers are being advised to carry on as usual until supermarkets and packers state clearly that producers can now go out and source GM feed.