Government 'must stand up for farmers' in Australia and NZ deals 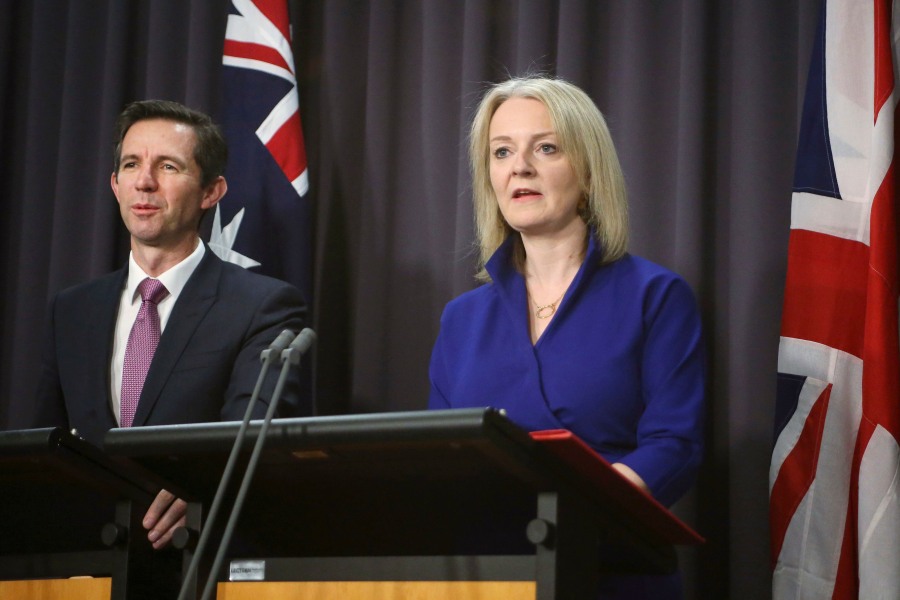 Farm leaders have urged the government to stand up for British farmers as trade talks with Australia and New Zealand reach an advanced stage.

The UK and Australia negotiators say they have agreed 'the vast majority' of a post-Brexit free trade deal, and it could be sealed by June.

"Both countries are confident the remaining issues will be resolved, and will now enter a sprint to agree the outstanding details with the aim of reaching agreement in principle," a joint statement said.

According to a report by the Financial Times, the Cabinet are worried about any potential backlash from the agriculture sector if the UK grants both countries tariff-free access to farming produce.

Two people with knowledge of internal discussions told the paper that ministers were divided over whether to grant tariff-free access to Australian farmers,

The UK Farming Roundtable, consisting of 19 industry bodies across a range of sectors, have since issued a statement urging government to uphold British farmers' high standards.

It comes as the government has repeatedly issued commitments to safeguard the country's own standards and to not undercut UK farmers.

In the Queen's Speech earlier this month, it pledged to promote the 'highest standards of animal welfare'.

But the groups warn that government must also recognise the 'specific sensitivities' of some UK farming sectors, such as beef and sheep, in the current negotiations.

Government should also balance improved access and lower tariffs for agricultural imports with quotas and other safeguards to 'avoid irreversible damage' to UK farming.

The Roundtable say that any trade deal should be 'genuinely reciprocal', and that the benefits 'properly reflect' how valuable UK market access is for foreign exporters.

Following a meeting of the roundtable on Monday 17 May, NFU President Minette Batters said agriculture was 'almost always the last chapter to be finalised' in any trade deal.

"We know that if we’re to open up the opportunities of new markets overseas for UK farmers, we will have to offer greater access to our own markets in return," she said.

“However, this trade-off needs to be balanced, and we need to make sure concessions to our hugely valuable home market are not given away lightly.

"There is a very real risk that, if we get it wrong, UK farming will suffer irreversible damage rather than flourish in the way we all desire."

She warned that opening up zero tariff trade on all imports such as beef and lamb would mean that British farming would 'struggle to compete'.

“Does government lower standards here, which it says it won’t and a million people who signed our petition don’t want to see, or will it watch family farms go out of business when they are unable to compete?

“Negotiators must also be mindful of the cumulative impact of our free trade agreements, which the government has said will be concluded in a matter of weeks."

The National Sheep Association, also a member of the Roundtable, recently warned its sector must not become the 'sacrificial lamb' in future trade deals with Australia and New Zealand.

Trade deals with New Zealand and Australia presented the 'biggest risks' for the UK sheep farming industry, the group warned.

"These two countries along with the UK are the world’s three biggest players in sheepmeat exports – so there are similarities," NSA Chief Executive Phil Stocker said.

"But the difference is that of the three nations, due to the size of our population, the UK is the only one that also imports significant volumes of sheepmeat – a free trade deal with either of these countries for sheepmeat simply means one-way trade."