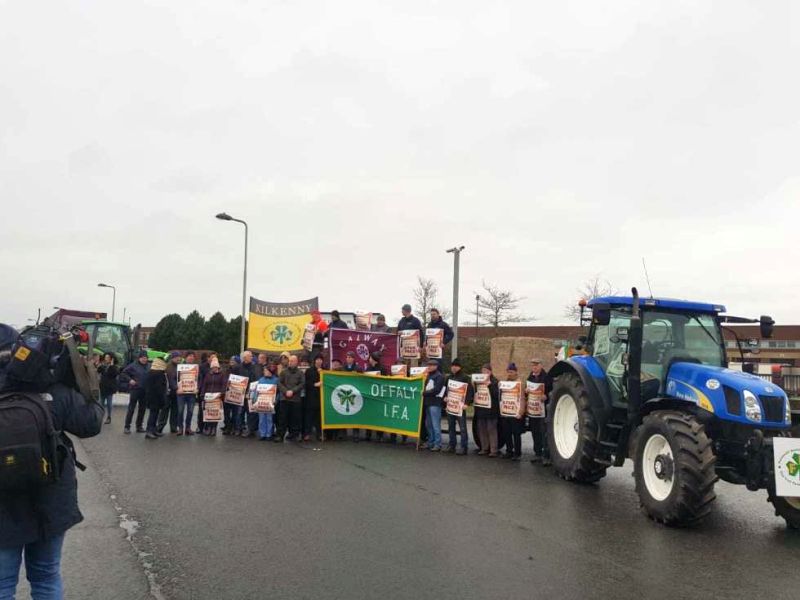 Irish beef producers are 'sick of being short changed' by meat processors and retailers, the Irish Farmers' Association says

Beef producers blockaded the facility in Naas, County Kildare, using a tractor and trailer, and they say it is the first of many such protests.

Aldi released a statement saying it was 'extremely disappointed' by the farmers' actions.

But the protesters, who are members of the Irish Farmers’ Association (IFA), are demanding a beef price 'at least in line' with the Bord Bia European Export Benchmark Price Index.

IFA president Joe Healy said that farmers are 'sick of being short changed' by meat processors and retailers on beef price.

“The supply chain is delivering mega profits for factories and retailers at the expense of farmers.

“We can have all the reviews we like, but farmers need a price increase now.

“They have a dominant role in a dysfunctional food chain and they have to be held to account,” he said.

Prices in the Republic have been well behind the EU and UK beef price for weeks.

Mr Healy added: “To hear Meat Industry Ireland representatives after the Beef Taskforce talk about the ‘green shoots’ of a market recovery when the grass has been growing under their feet for weeks is an insult to farmers’ intelligence and another delaying tactic.

The @IFAmedia protest continues here at @Aldi_Ireland. A number of lorries have given up and moved on. However the IFA say this is just the first of these blockade that they will hold over the coming days if beef price doesn't rise @farmersjournal pic.twitter.com/BwyyXO2e5h


“Farmers won’t accept any more stalling or a Mickey Mouse price increase. There is no reason why we shouldn’t be at the EU Export Benchmark Price.

“The retail sector has been driving down food prices without any consideration for the impact on primary producers.

“We hear a lot of talk from these retailers about Corporate Social Responsibility and sustainability. Yet, they work hand in glove with processors without any consideration for the impact on farmers,” he said.

“The supply chain is failing and today we are blocking it for 12 hours. We will continue to take action until processors give a significant price increase,” he said.

In a statement, Aldi said: “We welcomed the resumption of the Beef Taskforce this week and have engaged openly with farmer representative organisations on the beef issue over recent months.

“Aldi has a policy of open communications with all of its stakeholders, including the IFA.

“To be very clear, Aldi received no request for engagement on this issue from any member of the IFA leadership, no communication about specific concerns about the mechanics of the beef market, including age specification, and no warning of any grievance the IFA had before this morning.”

It comes as thousands of farmers in the country joined together in a mass protest in Dublin last week.

The unofficial action took place due to concerns over low prices for cattle and the direction and viability of rural Ireland.