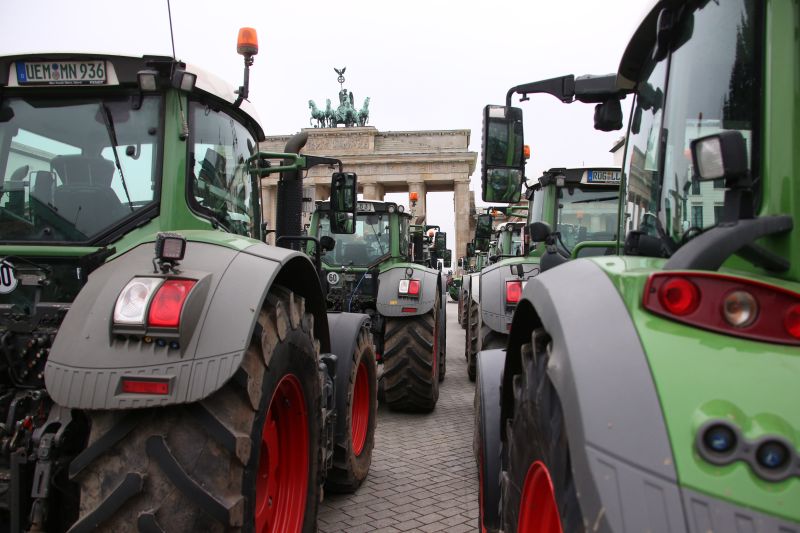 German farmers took to the country's capital on Tuesday in a mass protest involving up to 10,000 people (Photo: Action Press/Shutterstock)

Thousands of tractor driving farmers took to the streets of Berlin in a huge protest against over-regulation and government policy.

Around 10,000 protesters gathered at the iconic Brandenburg Gate and thousands of tractors blocked traffic on Tuesday (26 November).

It follows a similar protest last month, which saw farmers around Germany protest in major cities.

But yesterday's rally, which focused on government plans farmers warn are threatening livelihoods, was more significant and had a bigger impact on traffic in the capital.

Several roads around the city and the autobahn were hit by major congestion caused by an overload of tractors.


One sign attached to a green tractor which drove through the capital said: “First the plants starve, then the farmers, then you.”

Another read: “Do you know who feeds you?”

It comes as industry groups claim that new environmental restrictions are making it difficult for farmers to compete against imports from countries with lower standards.

Today, 10,000 tractors might bring Berlin to a standstill. German farmers are up in arms b/c of new regulations around nutrient management and crop protection. pic.twitter.com/nKnwocE2QG

Farmers in the country frequently highlight their frustration at being blamed by the media and government for ongoing environmental issues.

German farm bodies say that the current fashion of 'bashing farmers' has also made their lives miserable.

Farmers bring farmers on Bornholmer Straße. Around 10,000 expected in Berlin today to protest against environmental protection measures. What big tractors they have!! #Bauernprotest #Bauerndemo ?? pic.twitter.com/OcpCO1MO3b


They go on to say that discrimination against those in the nation's farming communities is a 'daily occurrence'.