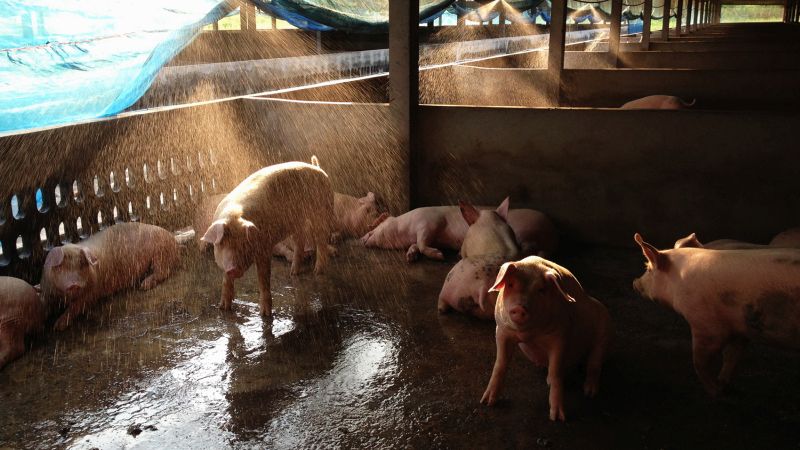 After a series of record-breaking heatwaves hit the UK – and another forecast for the Bank Holiday weekend – an agricultural expert is warning about the potentially fatal impact of heat stress on livestock.

Despite a wet and windy start to August, the Met Office is predicting temperatures will start to climb again this weekend, with hot weather expected to remain until September.

As the weather continues to oscillate between a deluge of rain and scorching temperatures, the impact on the harvest is the first thing that springs to mind, with time and effort concentrated on maximising yields.

But, as heatwaves become more commonplace, Sarah Verity, of Farmers and Mercantile Insurance Brokers (FMIB), urged farms to not overlook the effect of rising temperatures on livestock and to take precautionary measures against heat stress.

She said: “Farming is a weather dependent industry, acutely sensitive to temperature extremes, so the summer can be an extremely worrying and testing time of year for farmers. Harvest often takes precedence in these critical months.

“Of course, the wellbeing of the livestock is also top priority for farmers, but it takes just a few extra degrees, over a relatively short period of time, for animals to suffer the effects of heat stress – it can happen quickly and without much warning.

“Unfortunately, many animals do not have the ability to dissipate enough heat to maintain homeothermy, so even seemingly subtle increases in air temperature can be very harmful and can lead to death.”

An increase in body temperature can also impact on milk productivity in dairy cows, and cause beef cattle to lose condition.

“Farmers care deeply about the wellbeing of their animals and losing animals in this way can be very distressing.”

FMIB outlined some measures farmers can take to reduce the risk of heat stress in different farm animals.

Cows out to pasture are not usually as susceptible to heat stress as those kept in sheds.

However, working them during periods of extreme heat should be avoided; try to stick to early mornings. Evenings should also be avoided as it can take cows six hours to bring their core body temperatures back down to normal after being exposed to extreme heat.

Cattle naturally produce a lot of heat whilst they’re eating, and this peaks around four hours after feeding. Therefore, cattle kept in sheds need to be fed earlier than usual to avoid their body temperatures peaking in the middle of the day.

Dairy cattle can start to experience mild heat stress from around 20°C.

Increased ventilation, fans, shade and sprinklers can all help with reducing body temperatures. These should be used in holding pens and milking parlours, as cows are under increased stress in these areas.

Access to water should be a given but intake is likely to double under heat stress. Make sure calves in huts or cows separated for rest have additional water, as these animals are more susceptible to heat stress.

An increase in moisture caused by excessive sweating can also lead to mastitis.

Pigs are much more sensitive to heat than other animals because they lack the ability to sweat.

Signs of stress in pigs include open-mouth breathing, vocalisation, blotchy skin, stiffness, muscle tremors and reluctance to move. If pigs begin to demonstrate these symptoms, allow them to rest, keep them cool with fans and have access to plenty of water.

Sheep tend to be less susceptible to heat stress than other livestock. Wool protects sheep from extreme heat, as well as extreme cold.

Make sure sheep have been sheared and pay close attention for issues caused by flies.

During periods of extended heat and humidity, it may be necessary to provide extra water.

Poultry are highly susceptible to heat stress, and the first sign of this in the bird is panting.

Birds produce heat whilst digesting food so look to feed birds during the cooler parts of the day. With broilers and turkeys remove feed from the birds around six hours before peak temperatures and reintroduce once it’s starting to cool.

Avoid working them during the peak of the day. Keep dogs in well ventilated shade and with regular access to water. A shallow paddling pool is a fast way for a dog to cool down their body temperature.

Avoid taking dogs in the tractor or pick up whilst temperatures are high.