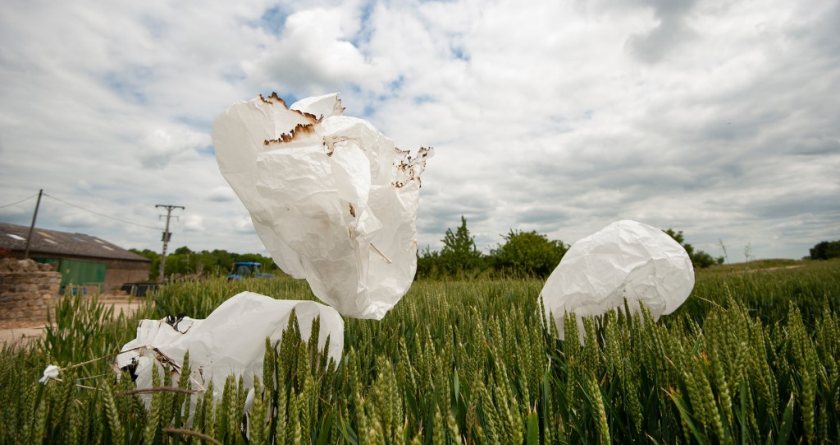 Sky lanterns can start fires in fields of crops and the wider countryside, the NFU warns (Photo: NFU)
Sign in to add your own press release SIGN IN Register

More than 50,000 people have signed an NFU petition calling on the government to ban sky lanterns amid rising concerns about livestock health and fire risks.

As the weather continues to remain extremely dry, the threat of fires posed by sky lanterns landing in fields of crops or grassland has been brought into sharp focus.

The petition urges the government to follow the lead of hundreds of local councils and introduce a nationwide ban in England and Wales.

Launched in May, it is supported by organisations such as the National Fire Chiefs Council (NFCC), RSPCA and Keep Britain Tidy.

The NFU has been campaigning for years to introduce a ban and so far, has succeeded in encouraging 185 councils out of 333 across England and Wales to voluntarily ban sky lanterns.

The union has heard from farmers about the devastating impact sky lanterns can have, such as their ability to cause distressing injuries to livestock.

The products can cause injury and death to horses and livestock by ingestion, entanglement and entrapment.

Sky lanterns, which increase in popularity on Bonfire Night and around New Year, also bring an added risk of fire damage to farms and the wider countryside.

They are constructed from paper with a wire or wooden frame and contain a lighted candle.

When they land, they have been known to set fire to sheds, causing serious damage and loss to the farm business.

NFU deputy president Tom Bradshaw said the amount of signatories from the public demonstrated the urgent need for a ban on sky lanterns.

He said: “As we continue to experience very dry weather in many places, alongside some of the highest temperatures on record over the past few weeks, this has increased the risk of fires being started by items like sky lanterns.

"Even in the past week, there have been reports of some farmers finding released sky lanterns on their farms, which is unbelievable when you think of the fires these could have started."

At this time of year in particular, a fire caused by a sky lantern would be devastating to crops, Mr Bradshaw warned, as well as buildings and machinery, and pose a risk to life.

He added that countries around the world, including Germany, Austria and Brazil, had all implemented a ban on the products.

"We urge the government to follow in their footsteps and create a safe, cleaner, greener countryside, by introducing a total ban on sky lanterns.”

According to guidance from the NFCC, sky lanterns should be not used under any circumstances, at any time.

NFCC wildfire lead, Paul Hedley said: “We have seen devastating fires caused by these lanterns, as well as posing a risk to wildlife and property.

"Fires caused by a sky lantern are likely to be complex and large-scale incidents, putting huge pressure on fire services.

"The current conditions across the country means there is a higher risk of wildfires than usual in many parts of the country; just one sky lantern fire could cause untold damage, while posing a threat to lives.”

The NFU’s sky lanterns petition has received over 51,000 signatures as of Wednesday 27 July. The petition can be completed online.