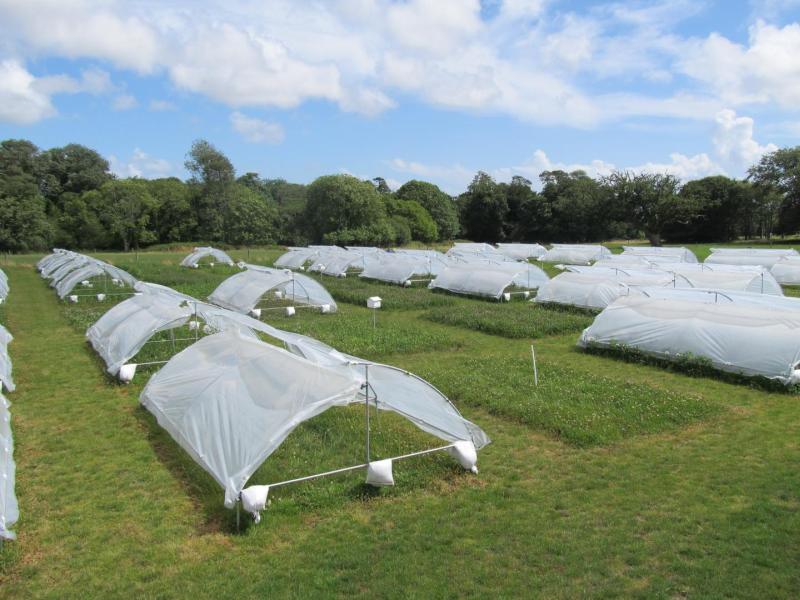 Half of the plots were covered in rain shelters to create a severe drought event for nine weeks (Photo: John Finn/British Ecological Society)

The benefits of multispecies mixtures were so strong that yields from a mixture of four species under drought conditions matched or exceeded yields for monocultures under normal rainfall conditions.

“Multi-species mixtures can be an effective, farm-scale practical action that could be used to mitigate or even adapt to the effects of severe weather events such as drought”, said Dr John Finn, researcher at Teagasc.

In Europe, grasslands will be increasingly subjected to intense winter rain precipitation and summer droughts.

In this study the effects of the experimental drought were substantial. However, compared to monocultures, higher yields in the four-species mixtures helped to compensate for this reduction.

In Ireland, across three harvests during and just after the drought period, the average monoculture yields of 1.41 tonnes ha-1 in a harvest dropped to 1.08 tonnes due to drought; the multispecies mixture under drought yielded 1.3 tonnes ha-1.

In Switzerland, the average monoculture yields of 1.63 tonnes ha-1 in a harvest dropped to 1.26 tonnes ha-1 under drought; the multispecies mixture under drought yielded 1.9 tonnes ha-1. In addition, the variation in yield decreased as plant diversity increased.

Half of the plots (3 metres by 5 metres) were covered in rain shelters to create a severe drought event for nine weeks.

This allowed them to compare the effects of plant diversity as well as drought on yield. A cutting regime was used to mimic grazing.

The research was performed across two sites in Ireland and Switzerland as part of AnimalChange, an EU project aimed at developing scientific guidance on sustainable development for livestock production under climate change.

The researchers are now looking to extend the length of the study and test other factors.

“Our experiment was sown in one year, and we applied treatments over the following two years. Ideally, we would like to continue the experiment for several years,” explained Dr Finn.

“We didn't have a grazing treatment, and it would be important to confirm that the observed mixture benefits in a cutting regime would also occur under grazed conditions. This work is currently ongoing.”

The researchers have also begun testing the effects of greater species diversity, expanding the tests from four crops to six, introducing timothy grass and plantain, and looking more closely at levels of nitrogen fertiliser.