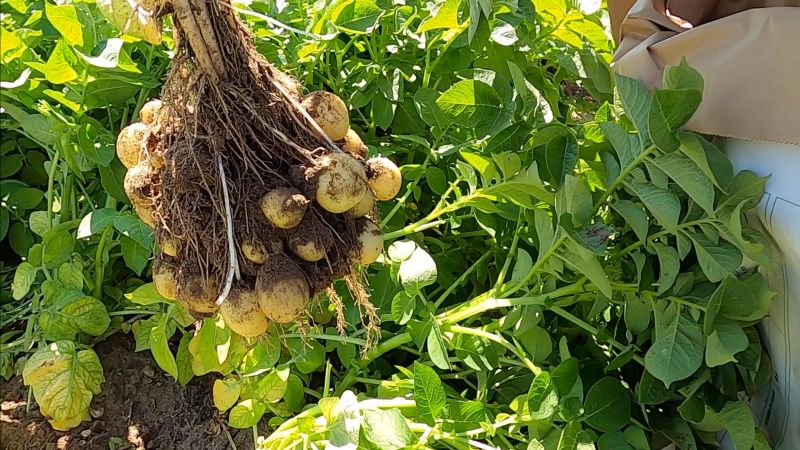 A next generation salad potato variety is on track to achieve 2 million tubers per hectare, bringing with it the potential to become a new market leader.

The variety Jacky is on target to produce 2 million tubers per hectare with 65% sized 25-35mm yielding 50tonne/hectare overall.

“Jacky could be a real game changer,” said Mr Coleman, MD at Crop4Sight, “I first saw it as a seedling in some of Greenvale’s trials and realised its potential.”

Jacky is a high-yielding second early potato variety. Bred to consistently produce round tubers below 45mm with pale yellow flesh, it is seen as ideal for the UK’s salad market.

Jacky scores 8 for black dot, 9 for foliar and tuber blight, Agrico, the seed supplier that developed the variety, explained.

Archie Gibson, executive director at Agrico said "It’s a highly versatile potato. Being robust and very round it rolls nicely on webs and conveyors and doesn’t tend to suffer from harvest damage.”

“The discovery trial with Agrico is building the data that will give growers highly accurate management knowledge needed to optimise Jacky’s high performance as soon as it comes to market,” Mr Coleman said.

Uniquely the platform shows target stem and tuber populations too. It was this aspect of the platform that revealed how and why Jacky is able to produce such large quantities of small tubers consistently.

“The parameters being measured suggest Jacky has a high tolerance to stem density enabling it to maintain a consistent number of tubers per stem at high populations,” said Mr Gibson.

“Together with its high blight resistance scores which potentially mean fewer sprays, Jacky has a capacity to be a very profitable crop.”

The crop in the trial at Greenvale hasn’t received any preventative sprays for blight: “If replicated in commercial growing situations, this natural resistance could save growers over £400/ha plus man and machinery hours.

“With demand outstripping availability of traditional market-leaders e.g. Maris Peer, Jacky is setting a standard that no other variety has got near,” Mr Gibson said.