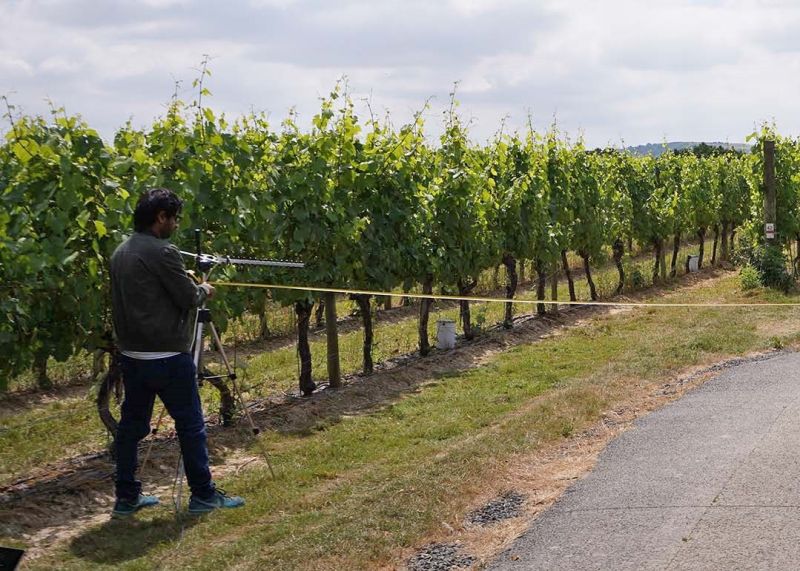 Growing enough food for the world’s burgeoning population may require smart farms that can sense their crop conditions and feed themselves on demand, according to researchers.

By 2050, the world’s population will be pushing 10 billion, according to figures by the United Nations.

With enormous numbers of people already underfed, estimates for the increase in food production required by mid-century vary wildly.

Some are calling for a doubling of production, with other estimates suggesting increases as low as 25% may suffice.

One thing that few dispute is that if farmers produce more food out of the world’s limited farmland, it should be done sustainably or risk a humanitarian calamity.

It’s a looming global challenge, according to Julie McCann, a Professor of computer systems at Imperial College London.

“Farming the world’s arable land to within an inch of its life is not the solution,” she said.

“On one hand, we need to protect the soil to ensure its longevity. On the other, we need to get more from it.”

Precision agriculture requires that farmers use sensor networks to become intimately acquainted with the state of their crops and soil at any given time and location in their fields.

By understanding what’s happening in fine detail, inputs such as fertiliser and water can be tailored, and disease outbreaks quickly identified.

In this way, inputs are optimised and crop yields maximised. And through more judicious use of pesticides harm to the soil and biodiversity are minimised.

But running wired infrastructure all over a farm is impractical and expensive, so sensors need to be low-powered and run on batteries or renewables such as solar.

Modern low-powered wide-area networks work well for agricultural applications, but they are designed for one-way traffic – i.e. sending sensing data to a farmer’s computer for analysis.

McCann and her team have designed a unique system able to transform a passive sensing network into a control network – a crucial innovation for precision farming.

How did it start?

McCann already had a research relationship with the Ridgeview winery on the South Downs of Sussex.

“Julie’s team had worked with us before monitoring energy, temperature and water use within the winery building,” says Vineyard Manager Matthew Strugnell.

“We were excited to see how remote sensors could help us to more closely see what is happening in our vineyard, providing a ‘higher resolution’ picture.”

The researchers placed sensors every 50 metres throughout the wine estate and within the winery building.

This set-up makes it possible to measure how the air around the vineyard changes in terms of humidity and temperature.

The ability to measure soil moisture content at both the micro and macro levels across the fields of vines will also soon be possible.

The initial goal is to model, in as close to real time as possible, the state of the fields.

The research challenge is how to make sense of data trickling in from potentially hundreds of sensors, at different times.

The trick is to process the data in such a way that it remains robust, even if parts of the network misbehave – as they always will “in the wild” – so an accurate prediction can be made of the current state of the field.

“We've got sensor data coming in. We can see if some plants are affected by certain localised conditions – that kind of thing,” says McCann.

Strugnell agrees: “We are able to understand the small changes in different areas of the vineyard. This can help us to identify potential disease hotspots, for example.”

The team is also exploring trends within microclimates in the hope of gaining valuable insights into optimal growing conditions.

The goal of control

The development of sensor networks to read the state of a farm at high resolution will facilitate sustainable practices, which is Ridgeview’s primary focus.

For agriculture more broadly, the sensor technology is only half of the challenge.

The other half is to take the information gathered by a sensor network, use it to decide what the crops in various parts of a farm need, then use LoRa – a low-power, long-range transmission technology – to control the farming processes, such as using actuators to add fertiliser or water in the appropriate amounts and locations.

To create a farm that can not only feel itself, but can also feed itself.

“The protocols used for sensing, which are low-cost, slow, and long distance, were not designed for control,” McCann explains.

“We've taken something that wasn't designed to be a control system, and we’ve built a control system out of it. As far as I’m aware, we are the first in the world to do it.”

Data scientists typically have plenty of code and processing power to play with; not so for McCann's sensor systems.

“To make our systems smart, we have to take a great deal of computer intelligence and boil it down to super-lightweight code.

“We have to take the powerful resources you expect from a data centre, and somehow shrink that down onto tiny devices and allow them to evolve their own intelligence as a network – a bit like ant and bee swarms.”

This control part of McCann’s system has been tested in London but not at Ridgeview. “The winery is very happy for us to read the vineyard,” McCann explains, “but they are understandably less comfortable letting a bunch of academics with their bleeding-edge research equipment feed their vineyard, so we’re not doing anything disruptive to the vineyard.”

That hasn’t prevented McCann from simulating their control protocol. “We've shown that our system can give the timing and reliability guarantees expected of such systems, for both this application and other applications. The next stage is to see how far we can go with practical actuation.”

What does the future hold?

The ability of farms not only to sense their multi-kilometre fields but also to use that streaming data to regulate themselves in real time offers hope for a more efficient and sustainable future for farming.

But the potential of the control protocols developed by McCann and her team have potential beyond farming.

“It could be used for water networks, which are much more complicated,” says McCann. In the future, she predicts that water pipe networks could be largely self-regulating.

That would require sensors to be distributed around existing networks, and more switching points (valves) added to the infrastructure.

“Ultimately, the goal is to make water networks as resilient as the internet, in the sense that water can be routed around failures or leaks, and be better matched to demand.

“We've simulated such networks in the lab and shown that such a system is very viable.”

This research on sensing and control protocols could therefore help to meet the Turing’s “resilient and robust infrastructure” challenge with respect to two fundamental resources that will become ever more important on a densely populated, warming world: food and water.