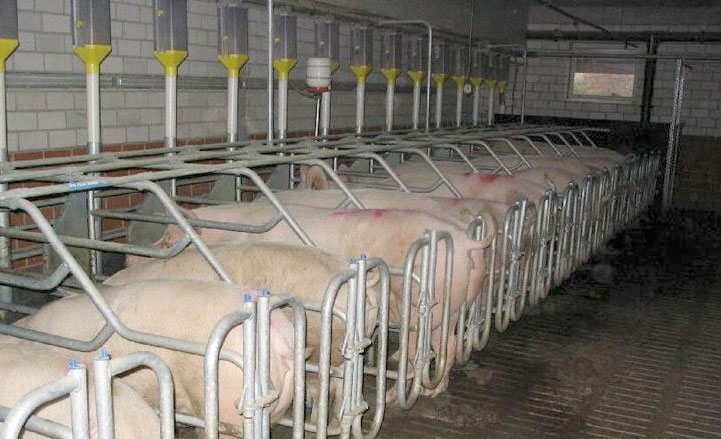 The National Farmers' Union has used a European advisory meeting to challenge Commission officials on their 'ongoing failures' to police pig and poultry rules across Europe.

The Pigs Directive lays down minimum standards for the protection of pigs within the European Union and one such standard, agreed by the EU in 2001, is the banning of sow stalls as of January this year.

Compassion in World Farming investigated 'shocking' lapses in pig welfare reported on Spanish farms still using sow stalls despite their EU wide ban implemented in the New Year, which the charity reported about in early March.

The NFU took part in the Egg and Poultrymeat Advisory Meeting in Brussels last week. Representatives from the Commission's Food and Veterinary Office (FVO) and its Animal Welfare Unit were questioned on the poor progress on inspections to verify Member States are compliant with the ban on conventional laying cages (introduced in January 2012) and the partial ban on sow stalls.

"Bins full of dead pigs being eaten by maggots; piglets lying in their own filth; pregnant sows kept in sow stalls, so narrow that they cannot even turn around: this is a horrific reality check" Compassion in World Farming said.

Stalls have not been used in the UK for many years, but figures released by Brussels show 80% of EU countries have not yet complied with the ban.

"This is against the law which requires that fattening pigs must be given straw or other natural manipulable material. All of the fattening pigs seen on the 9 farms had their tails docked, and may well have been subject to other painful and routine mutilations such as castration and teeth cutting" Compassion in World Farming CEO Philip Lymbery said.

While the UK met both deadlines, the failure of many Member States to introduce these pieces of legislation on time has been well documented.

"It remains a huge disappointment to producers that the Commission has yet to inspect or start to impose penalties on those Member States who are still producing eggs or pigmeat from systems now deemed illegal. That places our producers at a competitive disadvantage" the NFU said.

Speaking after attending last week's meeting, NFU Scotland’s policy manager for pigs and poultry, Peter Loggie said: "The Commission's attitude towards inspection and enforcement of these important pieces of welfare legislation remains lamentable and fails to ensure that all producers across Europe are abiding by the same set of rules."

"In the run-up to the laying cage ban at the start of 2012, the Commission's Animal Welfare staff promised inspections of Member States to check their compliance.

"Instead, inspections of the 13 Member States that missed the laying cage deadline were postponed because they would only have proved what these countries had freely admitted. At the time, we accepted that this was a sensible approach.

"As the United Kingdom imports around 60 percent of its pork — much of it as processed food such as ham and bacon — shoppers will need to be very careful about what they choose from supermarket shelves and when eating out in restaurants."

Loggie said Belgium, Hungary, Spain and Portugal have not had an FVO inspection to establish that they are now compliant and none are scheduled for 2013.

It was pointed out to the Commission that these Member States have yet to be re-inspected despite being found deficient in their compliance with laying hen welfare rules during previous inspections. As no action seems to have been taken against them, then it is possible that without further inspection they may continue to flout the regulations.

"It appears that lessons from the Laying Hen legislation debacle have not been learnt as Europe's introduction of the partial sow stall ban at the start of this year is repeating the mistakes. It is a disappointment that no FVO inspections on sow stalls are scheduled during 2013 to check the claims of compliance with the ban" said Loggie.

"At the end of 2012, only five countries in Europe were reported as being fully compliant with the stall ban but within weeks that figure has supposedly risen to 10. Of those countries still not compliant with sow stall regulations, the progress towards compliance has been nothing short of miraculous. In the space of a few weeks, France has gone from just 33% compliant to 72%, Belgium from 45% to 89%, Eire from 57% to 82% and Italy from 69% to 99%.

"That rate of progress should set alarm bells ringing with Commission officials. An NFUS member recently visited a supposedly compliant pig farm in the Netherlands and discovered that sows were not being kept in groups as required by the legislation. Instead, minimal changes had been introduced and pigs were clearly still being left in sow stalls and not being provided with the space required by the EU legislation.

"This simply highlights that a robust inspection procedure is an important tool to check that EU rules are being fairly, and uniformly applied. Greater Commission resources must be directed towards the inspection procedures, backed up by penalty proceedings against those countries where non-compliance with welfare rules continues."