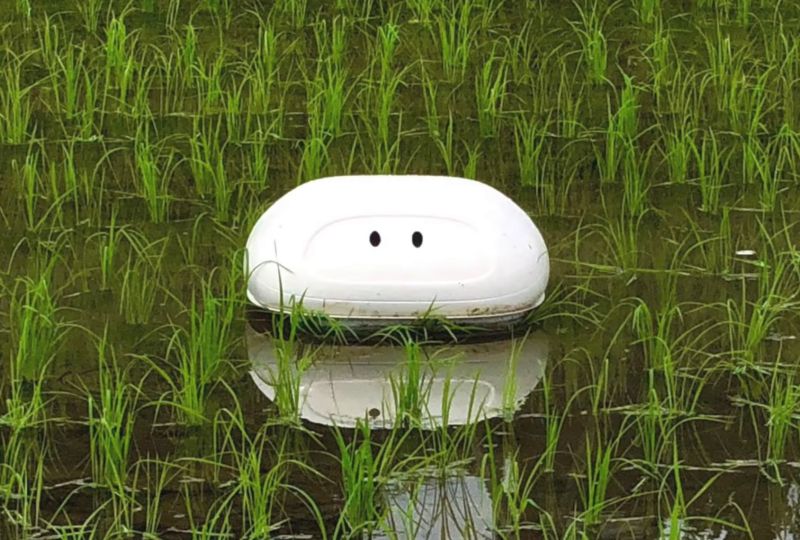 The small robot helps farmers destroy weeds in the rice paddy fields (Photo: Nissan Japan)
Sign in to add your own press release SIGN IN Register

Nissan is testing out its new 'robot duck' prototype to help Japanese farmers battle weeds and reduce pesticide use.

'Agiamo robo', which means 'robot duck', was created by volunteer engineers from the multinational car manufacturer.

The 1.5kg robot, which comes equipped with Wi-Fi and GPS, is being trialled in the rice fields of Yamagata Prefecture, northeastern Japan.

According to Nissan, the robot duck is 'sustainable' and 'economically feasible'. It has been developed to help reduce pesticide use when ducks aren't available.

Japanese rice farmers have traditionally used ducks as an alternative to using pesticides.

The animal tears up weeds and preys on pests in the paddy fields.

But the new agri-robot seeks to emulate that. According to Nippon.com, it roams the rice paddies and muddies the water with its two screws to prevent weeds from growing.

It follows news of a major US beef plant using a remote-controlled, two-armed, bag-waving robot called 'R2DMoo' to make their operations safer.

A major report suggests the global agricultural robotic industry will be worth $12bn by 2027.