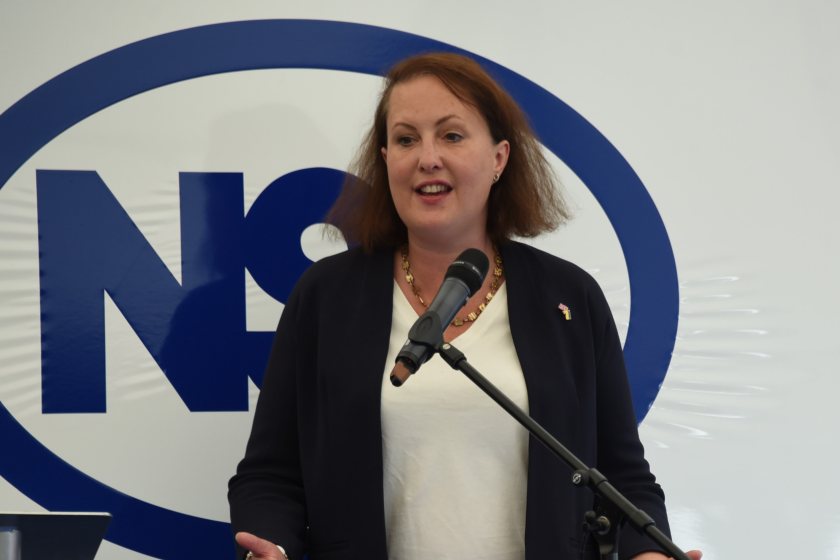 Minister Prentis encouraged farmers to be proactive in taking up such schemes, making it clear that now was the time to accept SFI was coming

A promise to advocate for farm support – but a push for farmers to engage with new schemes – was the message from Defra farming minister Victoria Prentis when she addressed the National Sheep Association (NSA) key event.

“While I am farming minister I will advocate for the best support for farming,” Minister Prentis pledged, speaking at NSA Sheep Event 2022.

Various elements of the event provided opportunity for visitors to better understand the Sustainable Farming Incentive (SFI) scheme, the successor to the BPS for England, with alternatives being designed separately in Wales, Scotland and NI.

Defra was also at the event to speak about the new Animal Health & Welfare Pathway, a smaller funding stream running alongside SFI.

Minister Prentis encouraged farmers to be proactive in taking up such schemes, making it clear that now was the time to accept SFI was coming, rather than taking a ‘wait and see’ approach.

She also urged UK lamb producers to be vocal about their work, through general farming practices and participation in new schemes.

“There is an obligation on British farmers to reach beyond the farm gate when promoting the high standards and quality of British food," she said.

This came with a warning about what might happen if the UK sees a change of government at the new election. Ms Prentis added: “Without the EU and CAP regulation, there is no guarantee from future governments on farming or farming support.”

The reference to a general election was tied up in comments about the ongoing Conservative Party leadership race – something that NSA chief executive Phil Stocker particularly picked up on from Minister Prentis’s address.

He said: “On many issues covered by Minister Prentis, through her speech and her responses to various questions, it was made clear the government is struggling to progress real issues impacting agriculture due to the internal government turmoil.

"In addition, although we may well have left the EU, I cannot agree that ‘Brexit is done’. The relationship between this government and the EU is making negotiations tough.

"And it is evident there is little power to address issues with the live animal Border Control Posts in France, or the contentious Northern Ireland Protocol to ease trading relations.

“NSA is concerned the lack of stability and continuity within the current Government will lead to more uncertainty and a lack of ability to make good decisions with inadequate consideration of the food and farming sector – an example being the lack of proper parliamentary scrutiny on the Australia free trade agreement.’

Minister Prentis also raised the issue of food security, saying it was top of the global agenda and was now being though of as a national security issue for the UK. As such, she said, it was ‘never 10 minutes from my mind’.

Mr Stocker said it was 'encouraging' to hear the Minister state her recognition of the importance of food, food security and the farming sector.

"I share her views that, as a farming industry, we need to constantly do more to think, reach and act beyond the farm gate," he said.

"There is a strong case to be made that the success of our future farming schemes, and funding for agriculture, will be best achieved by farmers engaging with schemes – particularly when there is a keenness to make them work for farmers.

“The world is changing around us. Our climate, our natural resources, our ability to feed ourselves and others, international relations and trade, economies, human behaviour and trends.

"The sheep industry needs to – and will – change accordingly, but I feel strongly that we need to be part of leading that change.”