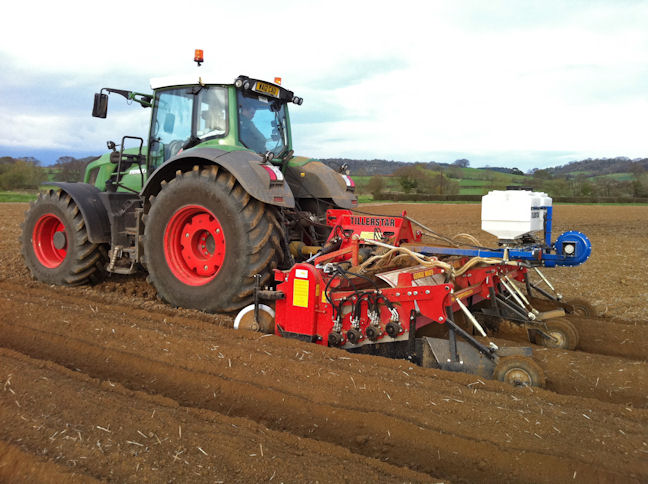 A two-bed version of the George Moate Tillerstar at work.

A unique British-built implement that reduces root crop establishment costs will be a star turn at the British Carrot Growers’ Association annual demonstration day in Yorkshire.

The Tillerstar bed maker and stone/clod separator from Norfolk-based George Moate Ltd will be in action in front of more than 200 growers travelling from around the country to visit the event, which is being held at the premises of M H Poskitt, Kellington on October 3.

“The Tillerstar has attracted a lot of interest among carrot growers, so we’re delighted to have the new machine at our event,” says BCGA secretary John Birkenshaw. “Normally, we have machinery on static display but, as long as conditions allow, the Tillerstar will be shown at work.”

Land used to grow commercial crops of carrots – as well as potatoes, onions and other crops grown in beds – is usually prepared using two or three different implements to cultivate the soil, remove stone and set up the beds. The Tillerstar does all this in one go.

“This one-pass approach not only saves a grower thousands of pounds in capital and running costs but also reduces his carbon footprint by making significant savings in fuel,” says George Moate managing director Richard Pratt.

The implement can work in stubble without any preceding cultivation and uses a PTO-driven horizontal rotor to cultivate the soil, which is then thrown on to four star rollers that retain any sizeable stone or soil clods as the loose soil falls through.

The stone and clod are transported forwards by the rollers, dropped into the void behind the rotor and then covered by the sieved soil as the machine moves forward. The result is a ‘clean’ bed up to 35cm (14in) deep ready for planting, with stone and clod distributed evenly beneath the full width of the bed – with other separation techniques, it ends up concentrated in rows between beds and must be redistributed after harvest.