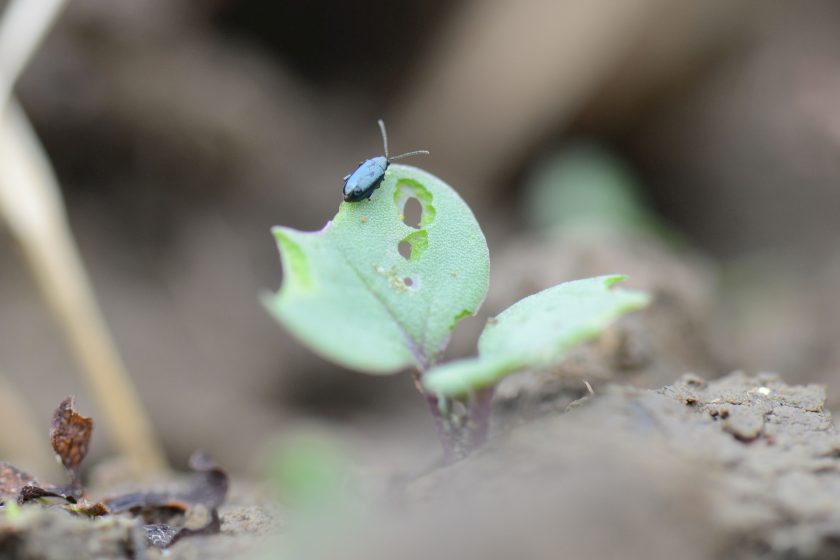 Monitoring of beetle numbers on the Syngenta iOSR Focus Site and across the eastern counties has seen a significant increase in CSFB pressure in recent days.

Early sown crops are now well established and have, for the most part, grown away from limited initial beetle feeding damage.

But where there has been protracted emergence in dry weather or new sown seedlings now emerging, plants at the one to three leaf stage are especially susceptible to attack, warns Syngenta Technical Manager, Dr Max Newbert.

This season’s trials at the iOSR site in Norfolk, assessed last week (17 September), has shown one well-timed application of Hallmark Zeon had given 50% reduction in beetle damage.

A second application in trials had added an additional 12 percent control of damage.

“The initial treatment was applied just as beetle activity started to take off on the emerged crop, 10 days after drilling," Dr Newbert said, adding that monitoring showed beetle numbers doubled in three days in the trial field.

The repeat application, in the first week of September, coincided in a second wave of beetle numbers, which have multiplied three-fold in the past week alone.

Dr Newbert also noted in trials where OSR was sown with a buckwheat and berseem clover cover crop, the Hallmark Zeon treatment had shown a 74% control of beetle damage as an effective ICM programme.

The iOSR trials will continue to assess impacts on future larvae numbers and final yield.

“The successful early establishment has now seen a surge in renewed interest among growers to plant more oilseed rape, for its value as a break crop in the arable rotation,” reported Dr Newbert.

“For many it’s a relatively low cost option to see what can be established, with the chance to revert back to a later drilled cereal if the oilseed rape fails.”

However, with CSFB numbers now on the rise, investment in a Hallmark Zeon treatment could help to get the crop can get well established from later sowing this autumn, he believes.

Dr Newbert advocates it is important to follow thresholds for applications and to monitor CSFB populations pre- and post-application.

“If the results of treatment are effective, it gives the crop a great chance. But if beetles remain in numbers after application, there is a good chance the population is showing pyrethroid resistance, when further treatments should be avoided,” he advised.

The key to success is to use the acknowledged best pyrethroid product, Hallmark Zeon, at the full label rate and applied in the best way possible, to get the greatest result and minimise the risk of resistance, he advises.

Furthermore, controlling adult CSFB now could serve to reduce egg laying and potential larvae infestations, even in crops that are already well established.

The Syngenta iOSR Focus Site is investigating a series of measures for integrated CSFB control, including cover crops, physical beetle deterrents and establishment techniques, along with timing of Hallmark Zeon treatments.