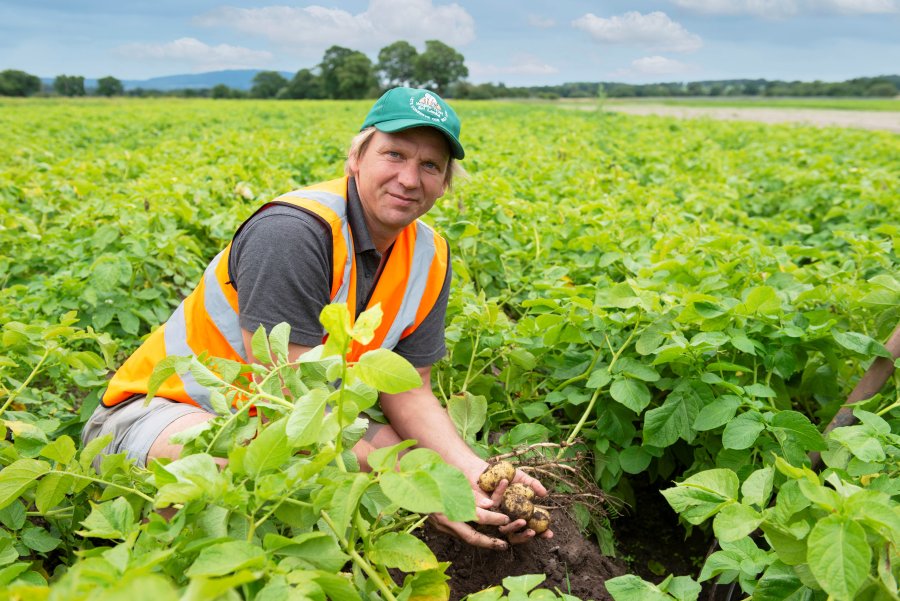 An organic vegetable farmer from Shropshire has made efficiency savings of more than 25% while almost doubling the land he manages for potatoes thanks to a new app.

Nick Taylor, who farms at Home Farm, has been instrumental in developing Crop4Sight, and is now using the platform to realise ‘massive efficiencies’ in his business.

He is growing 40 hectares of salad potatoes and 130ha of main crop potatoes this year which represents a significant step up in crop size compared to previous years.

But by adopting the app into the day-to-day running of the business, he has reduced the management time invested in producing the crops by more than a quarter, without compromising on the quality demanded by contracts with retailers.

It also enables farmers to benchmark their crops against other UK growers of the same variety and manage customer expectations around size fractions, quality, and contract fulfilment.

Mr Taylor said the app had given him far greater transparency over his potatoes, enabling him to focus attention where it is most needed.

It also significantly reduced the number of yield digs that need to be carried out, which has brought welcome efficiencies to the growing process.

Mr Taylor said: “The app is capable of taking account of the different variables at play and providing a detailed picture of the crop at all points of development.

“Before using it, in the most intensive part of the growing cycle we would carry out yield digs of five samples once a week to assess growth curve and size distribution.

“Now, we only need to do this once or twice between planting the crop and burndown as all the information is provided by the app.

“If the variables change, the app takes account of that, enabling us to take the necessary steps earlier to manage the bell curve of growth to achieve the maximum saleable yield.”

Mr Taylor added that the app was playing a significant role in grower/customer relations. "For customers, the graphical representations of the crop’s development are very useful,” he said.

“The app enables us to provide critical information to customers on the progress and quality of the crop we are growing for them. This in turn makes them more confident in what we are doing.

“That can be the difference between having a contract for next year and year after and the customer deciding to put their contract elsewhere.”

Paul Coleman, managing director of Crop4Sight, said that Mr Taylor's ?experience with the app was mirrored by many growers who had adopted the technology.

He said digital technology was starting to revolutionise agriculture and bring new efficiencies to businesses that had not been previously possible.

“With Crop4Sight, we wanted to create a powerful tool that used data and modelling to provide highly accurate crop forecasting to help agronomists and professional potato growers become more efficient," he explained.

“The app provides total transparency across a crop to the grower, the agronomist and, critically, the client, meaning the best management decisions can be made and the best saleable yield achieved.

“Not only does this help streamline the grower’s business by optimising inputs, labour and storage, it enables them to better meet customer requirements to build robust, long-term relationships."