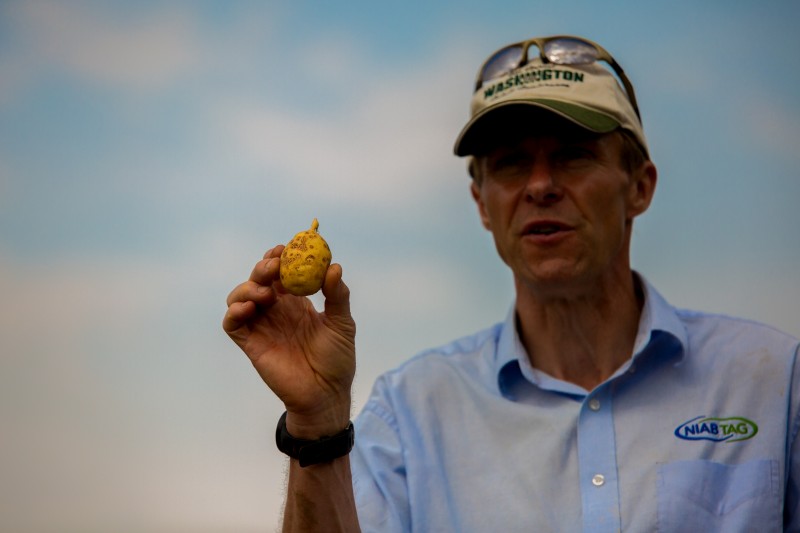 Potato growers are at risk of virus and disease threat if they do not follow an integrated approach to new desiccation regimes, say experts.

Observations at AHDB trial sites have shown that the slower ‘kill’ achieved by the chemical and mechanical alternatives to diquat means that green stems and leaves can still be present up to three weeks after desiccation sprays.

Even very small amounts of ‘green material’ remain a viable target for virus-carrying aphids and diseases, such as blight and gangrene.

In a recent AHDB webinar, seed growers were asked when they would apply their last insecticide to the crop – with 59% responding it would be over two weeks before a T1 desiccation spray.

Eric Anderson, Senior Agronomist for Scottish Agronomy, and leading the trials at Milton of Mathers Farm near Montrose, said not all growers would be thinking about virus threat when desiccating.

"But you can find aphids on green regrowth up to three weeks after your T1 spray," he added.

"Systemic insecticides generally remain effective for 14 – 21 days, with pyrethroids only lasting seven days – so if your last insecticide was applied two weeks before desiccation, you’ve got a problem.

“Even for ware and processing growers, the presence of green leaves and stems means the threat of foliar and tuber blight, which needs to be managed.”

Dr Mark Stalham, Head of NIAB CUF and leader of the AHDB trials in England, said he found big differences in the rate that different options killed off the canopy.

"But interestingly, far fewer differences in skinset than you might have expected by looking at the canopies. Rapid canopy death does not always mean rapid skinset.”

"The product is only half of your end result, the other half will come from the timing, nozzle choice, water volume and the skill of the operator,” he said.

AHDB field-based research and demonstrations on desiccation without diquat started in 2018 and has taken place on eight trial sites across Britain.