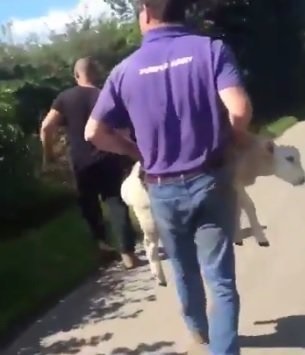 The man proceeds to throw the sheep in a field, which awkwardly lands

UPDATE: The man in the video has since apologised, and none of the sheep were injured.

The RSPCA has issued an appeal for information after footage emerged online showing a man throwing a sheep into a field.

The video shows a man carrying an ewe by the skin down a rural area in the Midlands.

He then proceeds to throw the sheep in a field, which awkwardly lands, and then attempts to stand up. It does and eventually limps away.

The man filming the footage can then be heard laughing as the sheep lies on the grass with what the RSPCA calls a suspected broken leg, saying that the sheep will “get up and go”.

It is hoped the man involved in the video will be found for questioning. The sheep may also need to be found for medical care.

The clip has been retweeted more than 6,000 times, with the area’s Labour MP Gareth Snell responding to requests on social media to look into the incident.

RSPCA is appealing for information about the video.