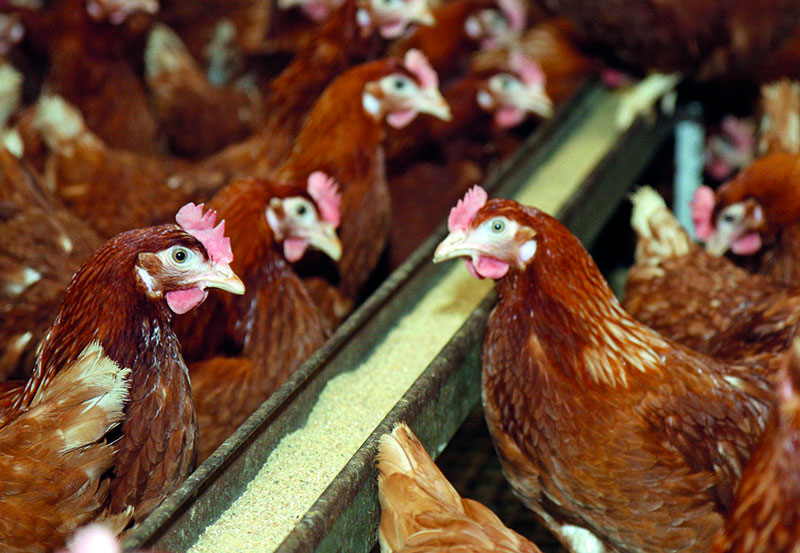 Free range egg producers supplying eggs for Sainsbury's supermarkets have been subjected to tests for the presence of GM content in feed.

Sainsbury's appeared to have slightly relaxed its insistence on non-GM feed in egg production after a number of supermarkets abandoned the requirement for egg producers to use only non-GM feed.

Asda and Morrison's were the first of the big retailers to allow GM content, Tesco recently joined them and Sainsbury's said it would, in future, guarantee non-GM content only on certain ranges. However, after speaking to a number of producers this month, it would appear that they are still being required to use non-GM feed and that their feed is now being checked for traces of GM content.

One producer, who sends his eggs to Noble, said, "They have been testing the feed samples. We are still being required to use non-GM feed and, as far as I am aware, the testing will become a regular event." He said the cost of the test was £135, although the expense was being covered by Noble.

As we reported in last month's Ranger, Sainsbury's issued a statement on GM content after Tesco announced that it could no longer guarantee non-GM content. The Sainsbury's statement read, “Whilst the latest scientific research and current Government advice is that GM ingredients do not present any risks to human health, we acknowledge the concerns of our customers and do not permit the use of GM crops, ingredients, additives or derivatives in any Sainsbury's own label food, drink, pet food, dietary supplements or floral products, this remains the case.

"We know that some of our customers also have concerns about products from animals whose feed may contain GM ingredients. Following an industry-wide availability issue it has become increasingly difficult to source guaranteed non-GM feed in the short term. So from this Monday, whilst our Taste the Difference and So Organic ranges will continue to be fed a non-GM diet, the fresh chicken sold in our by Sainsbury’s and basics ranges will be from birds that have been fed on feed which we cannot guarantee to be GM free. We have taken this decision in the obvious interests of animal welfare given the limited amount of other feed available at this time."

The statement continued, "The shortage is less immediate on eggs, but from around mid-May we anticipate that this will be in the same position and once again we will ensure our equivalent Taste the Difference, Omega-3 and So Organic ranges continue to be fed a non-GM diet to ensure our customers still have a choice.”

Despite the statement, we were led to believe by some producers that they were still being required to use non-GM feed for all egg production. When we approached Sainbury's about this, a spokeswoman for the company insisted that the supermarket's policy remained as outlined in the statement published in the Ranger.

Another producer told the Ranger that he was being told that he should use non-GM feed for his Sainsbury's egg production because the supermarket felt there were now sufficient supplies of non-GM. The argument for supermarkets dropping the non-GM requirement has been that it had become more difficult to source and that the price for non-GM feed had risen steeply. The egg producer told the Ranger, "Sainsbury's are saying that there is plenty of non-GM around because others have switched to using GM and that the price of non-GM is coming down. They want us to use non-GM."

Whilst a number of leading UK supermarkets have now moved away from the non-GM requirement, a group of major retailers from five other European countries have re-stated their commitment to non-GM soya in what is known as the Brussels Soy Declaration. In the declaration the retailers say they see animal feed as the main route by which genetically modified soya gets into the food chain.

Augusto Freire, president of the ProTerra Foundation, which administers a certification program scheme for non-GM, said, “in light of this declaration the UK retailers are in danger of being viewed as ‘backward-thinking’ on the issue.” He said, "The avalanche of press coverage following this announcement demonstrated that UK retailers had been ‘misled’ about the availability of non-GMO soy and were more likely using this as an excuse to cut costs and avoid more strict sourcing and traceability efforts with regards to their supply chain.”

He said, “Large retailers in Germany, France, Austria, Luxembourg, and other mainland European countries, quite opposite to the UK, are increasing their use of non-GMO soy in livestock production because they believe that consumers like choice as to whether they purchase genetically modified products.

“The UK retailers’ claim that they cannot obtain sufficient non-GMO soy meal for animal feed is simply not defensible in terms of a sensible consumer oriented corporate policy. In addition to our own assurances that there are supplies of non-GMO soy available from Brazil, both ABRANGE, the Brazilian association of non-GMO grain producers and processors, and APROSOJA, the Brazilian soy industry association, have provided clear evidence that non-GMO soy volumes are not only secure, but are growing year on year in response to growing demand, despite any occasional fluctuations due to climate, port logistics congestion, or variations in seed availability, which are hardly justification for dropping the use of non-GMO feedstuffs. Volumes of ProTerra-certified non-GMO soy imported into Europe have exceeded 4 million metric tons per year for each of the last six years and are expected to continue to increase this year.

"Even a larger volume of non-GMO soy is expected in 2014 because a robust seed certification program is being deployed by ABRANGE, which will also favour seed companies in terms of being rewarded for their efforts in continuing to preserve the best conventional soybean varieties. Besides, many growers are reverting to conventional production due to the fact that non-GMO soy has better yield and better resistance to adverse weather. APROSOJA has expressed readiness to deliver an additional 10 million metric tons of non-GMO soy to Chinese buyers even this year. If this is possible, increases for delivery to the UK and EU are also possible.”

In the UK, whilst the poultry sector has been required by most supermarkets to use only non-GM feed for many years, other livestock farmers have had no such requirement placed upon them. Poultry sector representatives, including the British Free Range Egg Producers' Association, have been pressing supermarkets to drop the non-GM requirement because of rising costs and supply difficulties.