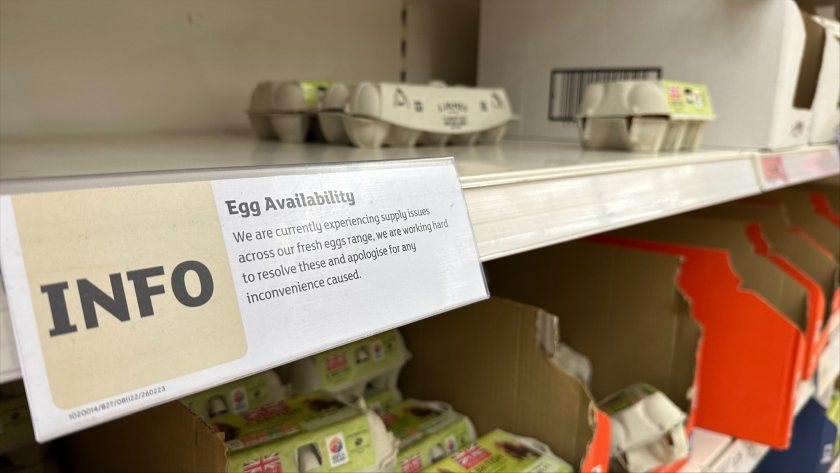 Shoppers across the country have been met with empty shelves as the egg shortage the sector warned of as early as March begins to bite.

With it fast becoming apparent that there will be a shortage of egg available to consumers in the run up to Christmas, the issue has been gaining widespread coverage in the national press.

Whilst retailers are keen to stress the impacts of avian influenza (AI), producers have continued to make it clear that spiralling costs and lack of support from buyers has pushed them to halt production.

The British Free Range Egg Producers Association (BFREPA) wrote to retailers in November last year and then again in February warning that producers could not continue to see losses whilst remaining in production and requested a 40p/dozen increase.

Following no response, the body invited all major retailers to a ‘Breaking Point Summit’ at the Pig and Poultry Fair in May to discuss the inflation crisis following the invasion of Ukraine.

None of the eight retailers decided to send representatives to the summit. BFREPA CEO Robert Gooch made it clear that should the situation not be addressed then there would be a shortage of egg in the run-in to Christmas.

He said: “Without change in how producers are paid, we will see boom and bust every few years, and that will lead to a shortage of supply with retail prices going through the roof”.

BFREPA did meet with two of the retailers after the summit, but Mr Gooch explained that they were not willing to offer producers any additional support.

“The two retailers said they were doing all they could to help producers but were not going to pay an increase of 40p/dozen," he said.

"I asked them if they were worried about a shortage of eggs in the run up to Christmas, and they both said no. They were and still are short-sighted with no plan for a sustainable supply chain.

“We are now in this position because retailers have not ensured that producers costs have been covered by the egg price paid to them.

"We now have shortages as I predicted and retailers are hiding behind bird flu and ‘consumer panic buying’, which is both disgraceful and misleading”, he continued.

“As retailers seem unwilling to acknowledge the issues they have caused in their supply chains, we are asking government for a review of retailer behaviour and contracts in the egg supply chain (as they did with milk and are now doing with pigs).

"In the meantime retailers urgently need to ensure that cost plus contracts to their producers become standard in the supply chain if they want their shelves to be full of free range eggs”.

In the time since BFREPA first raised the issue with retailers, the cost of production has soared even further for producers, including feed, energy, diesel, pullets, and packaging.

This has crippled many businesses causing farms to reduce numbers, pause production temporarily, or leave the industry altogether.

The latest BFREPA data shows that 33% of their free range producers have reduced flock size or stopped production, whilst the national flock has capacity for more than 44 million layers there is currently just 36.7 million in production.

In response the NFU have also echoed calls from BFREPA for a government led review of the egg supply chain.

NFU President Minette Batters said: “There are a huge range of issues facing the poultry sector, in particular within the egg supply chain, which have built up over months and which we have been warning of for some time.

"Energy price inflation and supply chain disruption have added to the worst outbreak in Avian Influenza yet. However, these pressures alone cannot explain empty shelves.

“The NFU raised concerns about the functionality of the supply chain with Defra a number of months ago in the hope of avoiding the situation we have now, with some retailers having to limit UK consumers’ access to eggs.

"This is surely a prima facie case of severe disturbance to an agricultural market”, she continued.

“It is critical that Defra acts now to investigate the issues in the egg supply chain so that any declaration under section 20 can be made as soon as possible.

"Poultry and egg producers must have the confidence they need, working within a fair and transparent supply chain, with fair returns for farmers, so they can do what they do best; meet demand from shoppers for quality British eggs and poultry meat.”

Whilst this winter’s AI outbreak has certainly compounded the challenges facing producers, it has been suggested by both retailers and the national press that this is a key driver in the shortage of egg.

Ioan Humphries is a free range producer near Carno, North Wales, told The Ranger: “Bird flu is not the main reason for this crisis and the retailers need to take responsibility for the situation that they have created”.

“They were warned in the spring that they were not offering enough money for our eggs, and they have failed to take that warning. As producers we are not willing to operate at a loss and just need a fair price”.

Mr Humphries has been gaining widespread coverage on social media where he has been explaining the position UK egg producers are in.

He said: “I just try to show the general public real-life farming so that people who are not from a farming background can have a clearer idea of how their food is produced”.

According to NFU data, since 2019 the cost of feed raw materials has risen by 90%, whilst Defra’s packer to producer price has increased by just 35%.

The UK’s largest packer, Noble Foods, acknowledged that the pressures on producers have led to a gap in the supply chain.

A spokesperson for the company said: “Egg producers and packers are losing money due to the unprecedented level of inflation in the sector, driven by global events.

"Additionally, the sector is experiencing a record number of avian flu cases which have made producers extremely nervous about restocking their flocks”.

“These issues of cost pressure and risk management require the entire supply chain to work together to find solutions to underlying challenges and ensure availability returns to normal levels.

"Meanwhile, as consumers would expect of us, we are continuing to work hard to get eggs from the farm onto shelves as quickly as possible to meet demand”.

The ongoing shortage has been hitting a wide range of businesses including those in the catering sector. Some Wetherspoon pubs recently had to change their menus due to a lack of eggs.

They said: “We are experiencing issues in receiving all the supplies we require to satisfy demand in every pub. This is not specific to Wetherspoon and other hospitality operators and supermarkets are facing similar issues”.

On supermarket shelves the situation has become more serious with Asda having limited sales to two boxes per customer and more alarmingly Sainsbury’s confirming that they are stocking eggs imported from Italy.

Robert Gooch responded by saying: “Seeing Italian eggs on the shelves is a wake-up call to all retailers that they can’t expect farmers to work for nothing. Enough is enough.”

“I have written to Sainsbury’s today to ask for a meeting to discuss how we forge a more sustainable future for egg producers.

"Sainsbury’s has made strong commitments to British free range egg producers in the past and I hope a positive dialogue can bring about change from what is a disappointing situation”.

In response to the ongoing supply issues Andrew Opie, director of food at the British Retail Consortium said: “While avian flu has disrupted the supply of some egg ranges, retailers are experts at managing supply chains and are working hard to minimise impact on customers.

"Some stores have introduced temporary limits on the number of boxes customers can buy to ensure availability for everyone."

He added: “Retailers have long-standing, established relationships with their suppliers and know how important maintaining these are for their customers and businesses.

"Supermarkets source the vast majority of their food from the UK and know they need to pay a sustainable price to egg farmers but are constrained by how much additional cost they can pass onto consumers during a cost-of-living crisis.”