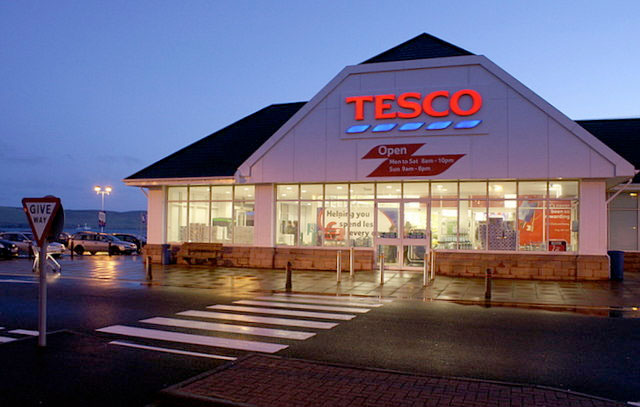 In 1999 Tesco wrote to its suppliers stating the company was aiming for the "complete elimination of GM ingredients from animal feed" and the phase was reiterated in 2001.

But Tesco said their suppliers found it increasingly difficult to guarantee that the feed they use is entirely GM-free.

"First, soya is the best source of protein to feed livestock. And as soya producers are increasingly turning to GM soya, it means they are producing less non-GM soya, so there simply isn’t enough non-GM feed available. It is a global supply issue – 80% of the world’s soya is now modified. Farmers across the world choose to grow modified soya for a number of reasons, but usually because modified crops are more resistant to certain pests and diseases.

"Second, because so much soya is modified and because of the way crops are planted, processed and transported, it is possible that non-GM soya crops contain low levels of GM soya. The new DNA testing regime we have put in place has identified that the risk of finding GM material in non-GM feed is increasing," the retailer said.

In common with other major retailers, Tesco decided to allow poultry and egg farmers to use GM soya in animal feed.

GM Freeze said Tesco 'led the abandonment' of the commitments made by UK supermarkets requiring varying degrees of non-GM feed use, saying it would permit suppliers “to use GM feed in producing our non-organic meat, eggs and milk”.

According to the National Farmers Union, the UK is not currently able to grow enough animal feed to support the farming industry. Because soya is the best source of protein to feed livestock, we need to import it so British farmers can produce the meat that goes on our shelves.

But a global shortage of non-GM soya feed is emerging, so our suppliers have turned to GM soya to maintain supply. In addition, because of the way crops are planted, processed and transported, non-GM soya crops may potentially contain low levels of GM soya.

Tesco said it will not have any impact on the quality or tastes of the food and, "most importantly, it will have no effect on health. As a food retailer, nothing is more important to us than the safety of the food we sell. Genetic modification affects only the plant which undergoes the process."

Jane O’Meara of GM Free Dorset said: “Tesco’s customers quite rightly expect the company to honor the pledges it makes, but in the case of GM animal feed customers have been badly let down, if not mislead.

"If Tesco is serious about ‘using its scale for good’ it should use long-term contracts to secure its share of Brazil’s non-GM soya, build confidence in this market and foster expanded production, which would in turn bring prices down under the normal operation of market forces. Despite having had over a decade to do this, Tesco has failed to secure long-term supply contracts for the non-GM soya available on the market, but nevertheless tries to assure customers and shareholders the company is acting sustainably. It just doesn’t add up.”

A 2010 poll showed 89% of Tesco customers want GM-fed meat, milk and eggs to be labeled, and 72% said they would be willing to pay more for foods produced without GM feed. The move toward GM feed therefore contradicts the promises the company made to its customers to get rid of GM feed and to ensure its supply chain is sustainable, plus Tesco continues to ignore the desire the vast majority of its customers have for labels.

Commenting on Tesco’s ill-judged decision Pete Riley of GM Freeze said: “Tesco is now backing GM soya production in South America, where it is grown in huge monocultures sprayed frequently with Roundup to the detriment of people and ecosystems there. Things are likely to get worse as weeds resistant to Roundup continue to spread.

“The decision to move away from non-GM feed was not the action of a responsible company, and shareholders need to look carefully at the impact this decision will have on the quality of what Tesco sells and its reputation with its customers.”