The Essex arable farmer who has turned to agroecology 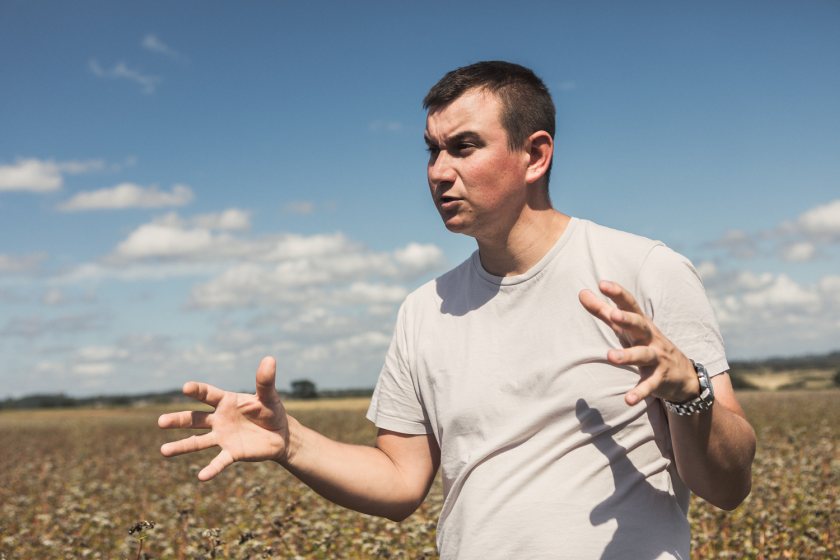 Since returning to his family farm in Essex, George Young has made a radical switch to an agroecological system

George Young did not take a conventional route into his family farm, and the same can be said of his approach to agriculture.

Since returning to the Essex family farm in 2013, he has made a radical switch to an agroecological system, and is now aiming to develop his farm into a thriving ‘food hub’.

Before then George had studied maths at Edinburgh University before pursuing a banking career in the City, where he continued his passions for music and film editing.

“When I was growing up I had absolutely no interest in farming”, George told FarmingUK.

“But when I got to 27 my career was not really going anywhere, and I decided that the lifestyle of coming home and being a farmer would be better than my lifestyle working long hours in the City”.

Once George had returned to Fobbing he threw himself into gaining the farming education he felt he had missed out on during his time away from the industry.

“I had to learn how to farm, which was a fascinating experience,” he explained.

“It didn’t take long before I became interested in ways of farming that were a little closer to nature and my agronomist introduced me to another one of his clients, Simon Cowell.

"He is a biological farmer who is no-till and after forming a good relationship with him we decided to go no-till ourselves in 2014.”

That move prompted George to think about how things could be done differently, and he set about introducing nature into as much of his farm as possible.

He said: “Farming is inevitably interventionist, but what you can try to do is create a system that is good for nature and also works pretty conveniently for you.”

George’s system has involved creating a network for wildlife across his farm, splitting his fields up so that they are farmed in 36m wide strips with 6m wide belts inbetween them that act as corridors for animal and insect life.

These strips link into a wild seam of permanent habitat that George is creating across the centre of his land which varies in width from around 20m to a maximum of 80m.

His fields do not simply grow one crop either, instead he has created ‘turning headlands’ which are left to grow a forage crop and are used to turn machinery on. 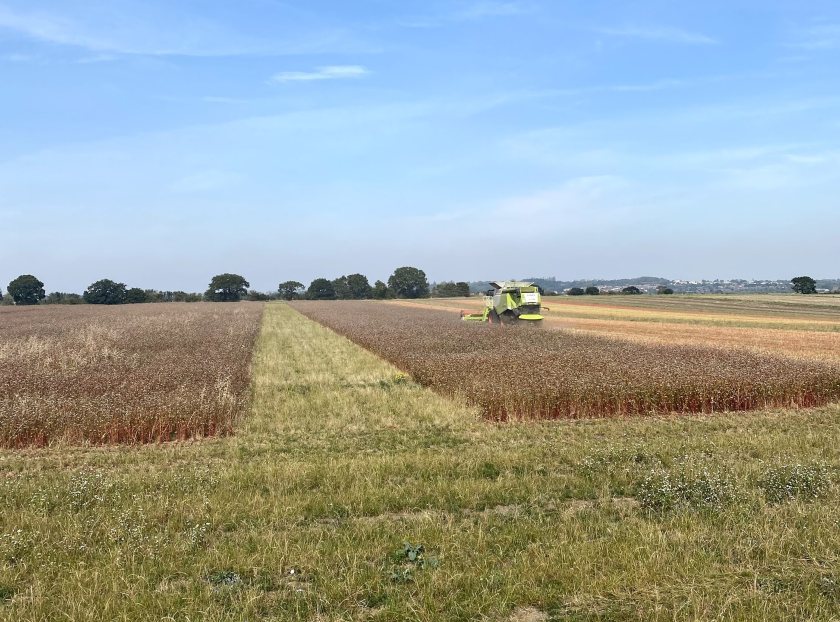 George has also made a radical move to using no insecticides

George has also made a radical move to using no insecticides: “After a few years of being insecticide free we really started to notice the difference.

“At harvest you see the number of mammals in your crops, and they are only there because of the food web below them.”

Alongside this, George recently began a venture into agroforestry, having just finished planting nearly seven thousand trees on his farm.

He said: “We have planted a whole variety of different trees in the 6m strips, and they form part of the network of ecology across the farm.

"The plan is to harvest around 60% of the fruit, with the rest left either for livestock or to be used for alcohol production.”

Having been no-till for the last six years, George this year made yet another radical move by going organic.

He said that his time as a no-till farmer has massively informed the way in which he is becoming organic.

“For me the biggest win of no-till is the lack of disturbance, which means a wealth of wildlife are able to use the fields as a habitat.

"This is why we have such narrow fields, to ensure that any wildlife in the boundary strips is able to re-integrate into the field.” 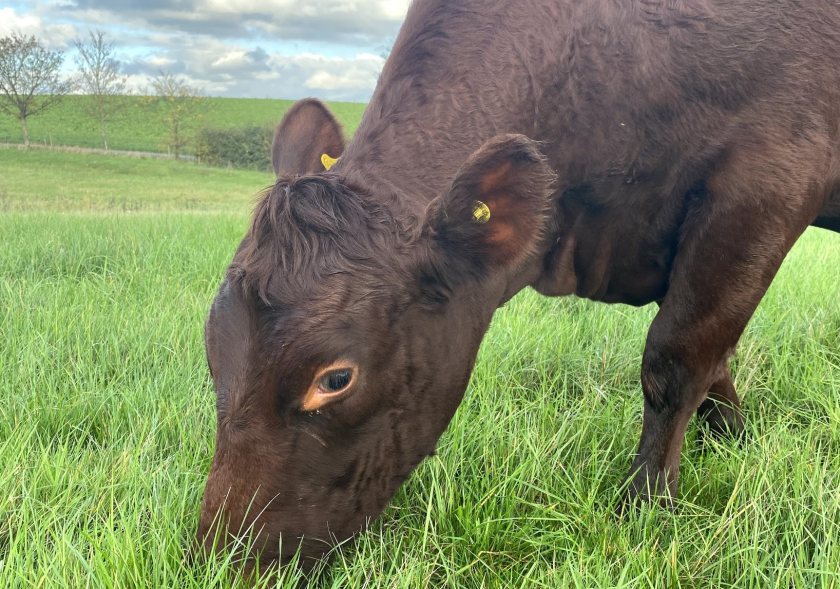 With his move to organic, George has begun grazing cattle

Whereas a typical organic rotation involves one or two years of fertility leys and then four years’ worth of cropping, George is once again breaking with convention.

He said: “I am looking at a rotation of four years of herbal ley grazed by livestock, followed by three years of cropping.

"I think without hoeing it will be a challenge to get more than three years of cropping.”

Whilst livestock have always been a part of the farm at Fobbing, they have never been integrated into the arable rotation.

With his move to organic, George has begun grazing cattle: “We bought a herd of in-calf Red Poll heifers in November," he said.

"They are the ideal cattle for us as they are dual purpose, and I am looking into milking them,” he said.

“We have had a few problems with a couple of abortions due to neosporosis, but we are looking to buy more heifers and a bull this spring.”

George’s approach is not just about bringing his farm closer to nature, it is also about integrating the whole food system. 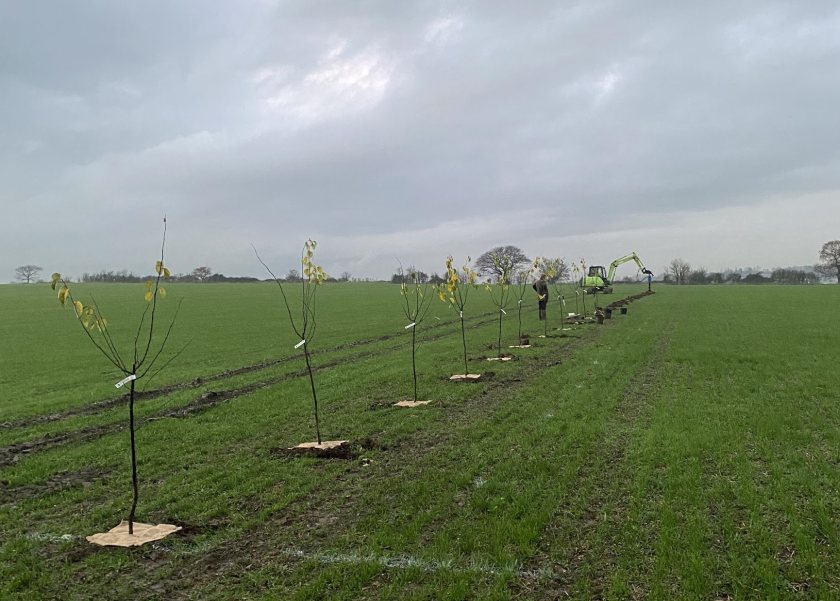 He explained: “Rather than just growing commodity crops, it is about growing food that you know is genuinely going to end up on people’s plates.

"What excites me is growing a crop of wheat and seeing it in a loaf of bread at the other end.”

After exploring this further, George developed a strong relationship with two small scale food companies, Hodmedods and the Small Food Bakery, which persuaded him to try growing a range of different crops.

He said: “I now grow buckwheat, lentils and yellow peas for Hodmedods, and I have tried a whole host of others such as lupins, teff and tiger nuts, which have had varying levels of success.”

He has also been growing Wakelyns population wheat which was developed by plant pathologist Martin Wolfe.

George explained: “Wolfe took 20 varieties of modern wheat, crossed them, and then grew the resulting population of crosses on.

"The idea is to create a mixture which is more robust and resistant and can adapt locationally to each farm where it is grown.”

Now George is moving these short field to plate supply chains even closer to home by developing what he terms a ‘food hub’ on his farm.

He is currently building a small flour mill where he is planning to mill his own wheat and he intends to add a bakery to that in the next few years.

“As part of this I have also invested in a decorticator which I will be able to use to dehull grains and will allow us to keep some of the buckwheat and other niche crops on the farm,” he said.

The Fobbing farm is set in one of the most populated parts of the country, and George believes this gives his farm huge potential to generate business and employment.

“There is a lot of capacity for direct employment on the farm. These are already being created through the agroforestry which will need full-time and seasonal employees.

"But I am also looking at dairying and then making our own cheese, perhaps keeping some sort of poultry on the farm, and I am even considering ways of using the farm as an event space.”

As part of this long-term vision, George is also thinking about digging a 12 acre reservoir which could support both a strong ecosystem of water based ecology and some form of market gardening setup.

“The aim is for other people to create businesses off of the back of mine, and they can then work synergistically together, for example a business making cider would work perfectly alongside the agroforestry.”