Top Euroblight rating for Signum for Alternaria control in potatoes 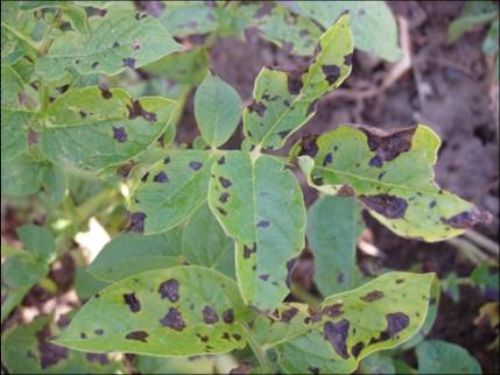 Top Euroblight rating for Signum for Alternaria control in potatoes

Signum, which has a new off-label approval for use against early blight or Alternaria in potatoes, is highly rated for Alternaria control by Euroblight and has a 3* rating, the highest rating awarded.

In the Alternaria control Euroblight Network ratings where Product Efficacy is rated on a on a 3 star scale, Signum (pyraclostrobin + boscalid)and azoxystrobin have 3 stars, zoxium (zoxamide) + mancozeb has 2 and a half stars, mancozeb, famoxadone + cymoxanil and fenamidone + propamocarb hydrochloride have 2 stars, chlorothalonil has 1 and a half stars and fluazinam has 1 star.

The use of Signum is covered by a SOLA recommendation; growers therefore need to obtain a copy of the notice of approval to use Signum in potatoes via the Chemicals Regulation Directorate (CRD) web site, ADAS offices or NFU. The SOLA reference number is 0394 of 2011.

The SOLA relates to the use of Signum (boscalid and pyraclostrobin) for the control of strains of Alternaria (early blight). It should be applied at a maximum individual dose of 0.25 kg/hectare in 200 to 400 litres of water per hectare. Up to 4 treatments per crop/year can be applied. This has increased from 2 treatments per crop/year for last year’s SOLA. The latest time of application is 3 days before harvest. Timing of treatments for effective control of Alternaria is important because infections often appear early and the products available only offer protectant activity.

The most effective results are achieved by supplying Signum at 14 day intervals in conjunction with a programme for late blight at 7 days intervals. By starting the programme early, before infection starts, e.g. early to mid June, 4 applications of Signum can give protection for up to 6 weeks. Crops should be inspected at regular intervals soon after emergence to ensure the first application is well-timed.

Invader, used for late blight, can also help to reduce effects of Alternaria as it delivers 1600 gms of mancozeb/hectare along with 180 gms of dimethomorph/ha at its new higher recommended dose rate of 2.4 kg/ha. At least 1500 gms/ha of mancozeb is required to effectively reduce disease pressure, but all other formulated products for the control of late blight only apply approximately 1200-1300 g/ha. Invader can therefore be used to help combat Alternaria, as part of an integrated programme together with early blight, particularly if applied early in the season.

Background on Alternaria in potatoes

In recent years a number of factors have combined to increase the incidence of Alternaria in potatoes in the UK. Firstly more susceptible varieties are being grown including Markies, Hermes, Vivaldi, Saturna and Maris Piper. Secondly, reduced use of mancozeb in late blight progammes may have led to more Alternaria, as has reduced nitrogen usage. Also with warm days and cool nights during the early growing period of the crop, the UK is experiencing more favourable weather conditions for the development of Alternaria.

The disease is caused by two species ’ Alternaria solani and A. alternata. An early infection resulting in heavy disease pressure can result in a yield loss of 20 ’ 30%.

The typical concentric-ring symptoms appear principally on the leaves, with smaller lesions expanding into larger ovoid lesions, often with a yellow margin. The disease symptoms can be confused with manganese deficiency, magnesium deficiency and ozone damage, which can also produce lesions with concentric-rings.

The disease survives the winter as mycelium and spores which are found in crop and alternate host trash, as well as in the soil or infected tubers. Spores released in the spring act as the primary inoculum source and these can be carried by wind and water, resulting in further disease build up and spread. The disease needs warm wet weather for an epidemic to fully develop as spore production is favoured by alternating wet and dry periods.