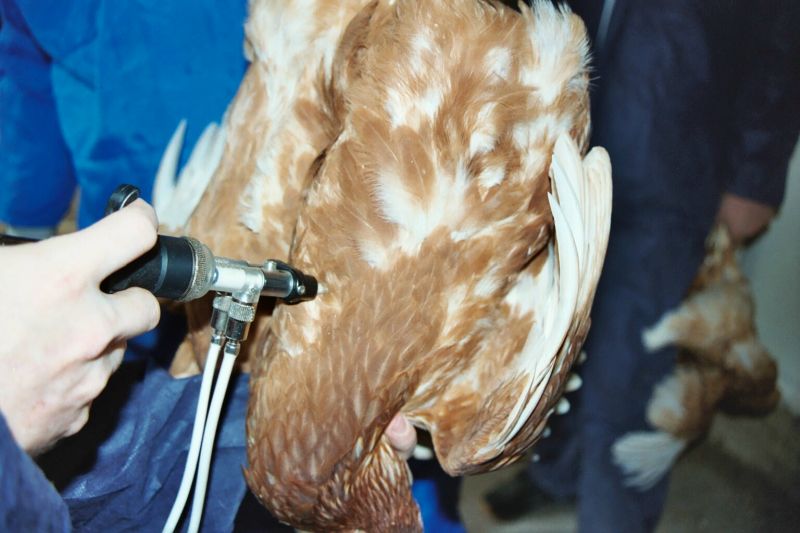 Scientists in the UK have developed a new vaccine against avian influenza using a technique pioneered at the Pirbright Institute.

In 2017 Pirbright had used genetic engineering to develop a more efficient and effective vaccine for Marek’s disease.

Professor Venugopal Nair, who is the head of the avian viral diseases programme, said at the time that one of the advantages of the new technique was that vaccines could be developed far more quickly.

He said then that the technique used to produce a more effective vaccine for Marek's disease could produce vaccines for new AI strains within days.

Now, a Pirbright team has announced that it has used the gene editing technique to produce a new vaccine that protects against both Marek's disease and avian influenza.

A team led by Professor Munir Iqbal, head of the avian influenza group at Pirbright, says the process is more efficient, as well as faster, compared to previous methods.

And it says it will allow poultry vaccine producers to rapidly update vaccine strains in order to keep up with virus evolution.

The team's work, which was published in the journal, Vaccines, involved using a gene editing tool called CRISPR/Cas9 to insert an avian influenza gene into the turkey herpes virus (HVT) that is used in Marek’s disease vaccines.

“HVT is already widely used in vaccines against Marek’s disease and can be administered to eggs, enabling automated delivery and providing birds with protection from the day they hatch,” said Professor Iqbal.

“The additional HA (haemagglutinin) gene we have incorporated will be expressed by HVT when it replicates in host cells, meaning that a single dose of vaccine induces immunity against both viruses.

“The genetic engineering process we have developed using CRISPR/Cas9 is far quicker and more efficient than previous technologies, as well as being very consistent and accurate.

“These attributes are essential for providing fast and reliable vaccine production to protect poultry”, he said.

AI is seen as a growing threat to the poultry industry, both here in the United Kingdom, across Europe and in other parts of the world.

In 2015 a bird flu epidemic in the United States is estimated to have cost the US government a billion dollars.

A total of 40.6 million pullets were either lost to AI or culled as a result of the epidemic.

Professor Hans-Wilhelm Windhorst, IEC statistical analyst, has put the overall economic impact on the United States economy at $2.6 billion. The cost of lost birds and production amounted to £812 million.

Over the winter of 2015 and 2016 there was a series of cases across the UK - the most serious an outbreak at Staveley’s Eggs, which was a high pathogenic case and which resulted in the loss of nearly 200,000 layers.

Barry Thorp of St Davids Poultry Team subsequently warned delegates at a conference for the British Free Range Egg Producers' Association (BFREPA) that it was inevitable that AI would continue to appear in the UK.

“Every 12 to 18 months we are going to have outbreaks of AI within units in the UK, no doubt about it. The only question is how quickly we find it and how much it spreads before we find it. That is what we have got to stop.”

He said: “Up until now we have been lucky with avian influenza. It is cropping up about every 12 months on a poultry farm somewhere in this country.

“Up until now it hasn’t spread much; we have picked it up early and I think we have been lucky. We can’t keep on being lucky. Once in 10 years we probably won’t be lucky and it will spread. We have to stop that happening.”

An expert group of the International Egg Commission (IEC) has considered the possible benefits of vaccination.

It produced a report in which it said there were advantages - particularly in developing countries where vaccination could, it said, help to protect a vital source of protein.

However, it said there were concerns that vaccination could lead to complacency in implementing good surveillance and bio-security measures.

And in developed countries the use of avian influenza vaccines could impact on trade, it said.

The Pirbright researchers said that in their gene editing work they used the gene codes for haemagglutinin - an influenza protein that is key for virus entry into host cells and is, therefore, an important target of the host immune response to block infection.

Mutations could occur with high frequency in HA proteins, they said, enabling flu viruses to evade immunity generated by vaccines.

“Using CRISPR/Cas9 to create new vaccines will help tackle evolving viruses by reducing the time it takes manufacturing companies to adapt their vaccine strains to match these mutations, allowing faster responses to outbreaks and providing better protection,” they said in a report on their work.

They said that, although the gene editing method was very reliable, a small number of HVT viruses failed to incorporate the HA gene into their own genome effectively.

“To ensure HA is being expressed in the vaccine, the team exploited the HA protein’s ability to bind to molecules on the surface of red blood cells,” they said.

“Chicken cells infected with the successfully modified HVT virus express HA on their surface, which red blood cells attach to, forming a clump that can be visualised using microscopy.

“This simple lab test improves the speed at which suitable vaccine candidates can be identified and has a much broader application as it can also be used for other viruses that incorporate proteins, which interact with red blood cells.”

Professor Iqbal said: “Improving how we make vaccines is critical for preventing avian influenza outbreaks. Our work could help reduce the spread of disease between birds and reduce the risk of infection for people who work closely with poultry.

“Now that we have developed a rapid method for generating this modified vaccine, our next steps will be to study the vaccine’s effectiveness in field trials.”