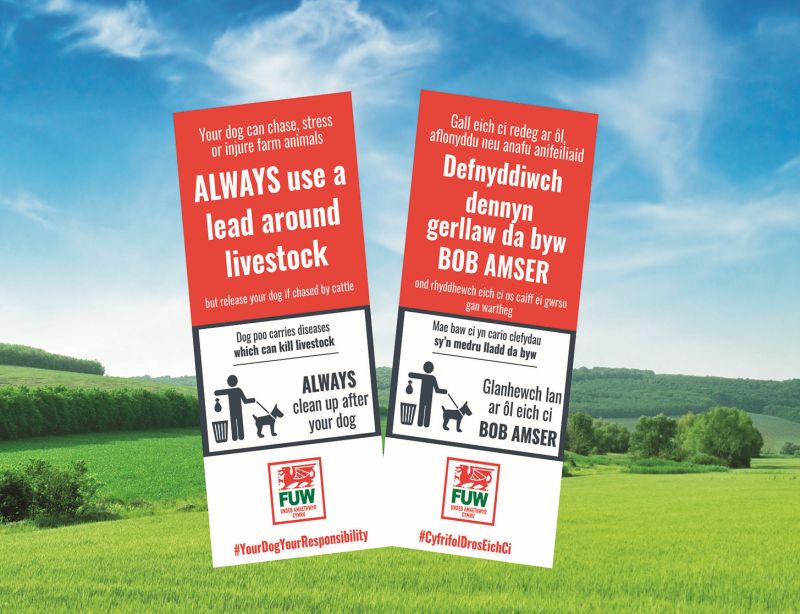 A farming union is handing out free gate-post warning signs for farmers to educate the public on the devastating effects of livestock worrying.

Dog attacks on livestock in the countryside remain a major concern for farmers across the UK.

Statistics released earlier this year shows that livestock worrying is at a historic record high.

To help the industry raise awareness of the problems arising from irresponsible dog ownership, the Farmers’ Union of Wales (FUW) is handing out free signs.

It's part of the union's campaign “Your Dog, Your Responsibility,” which aims to highlight the devastation caused by dog attacks on livestock.

It also aims to raise awareness of the serious diseases that can be spread from dogs to cattle when owners do not clean up after their dog.

FUW Senior Policy Officer, Dr Hazel Wright said the impact of a dog attack on a farming family can be 'devastating'.

“In today’s market place with ever tighter margins, these additional costs have serious financial implications for the future solvency of the farm business.

“Our farmers are repeatedly faced with a field of dead or dying stock following a dog attack and many of them have now reached a financial and emotional breaking point,” she said.

Despite numerous industry campaigns aimed at educating dog walkers, there were 449 cases of livestock attacks between 2013 and 2017 in North Wales alone.

As large as this number is, it is likely to be an underestimate as many farmers often don’t report such attacks.

Dr Wright added: “We have therefore launched our farm-gate warning signs to provide members with a practical way to remind those walking dogs near livestock about their responsibilities and about the potential dangers.”

Farmers can pick up the gate-post signs from the FUW pavilion at the Royal Welsh Show.