Vertical farming on the rise in the UK 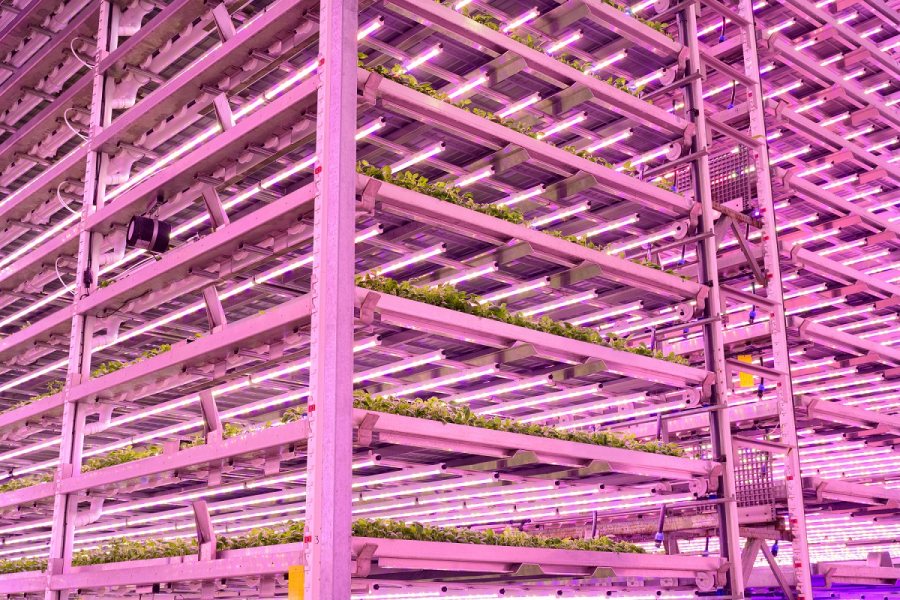 What is vertical farming and does it have a role in the future of UK agriculture? With the pandemic having increased the focus on the importance of food security and the reliability of supply chains, vertical farming has become a major talking point over the past year.

Indoor farming has seen a flurry of recent investment across the globe and around $1.8 billion has flowed into the sector since 2014, according to data group Dealroom.

There have recently been a number of standout developments, including the construction of Europe’s largest vertical farm in Denmark and plans to build the world’s biggest indoor farm in Abu Dhabi.

Advocates believe the sector holds the future for food production, citing the advantages of short supply chains and concentrated production.

Others, however, say it is inefficient, suffering from high running costs and relatively small-scale production.

What is vertical farming?

Vertical farming is the process of growing plants indoors under controlled conditions in a series of stacked layers.

Rather than using sunlight, like in a glasshouse, many of these urban farms are reliant on LED light which is adjusted dependent on the growth stage and crop type.

Techniques such as soil free growing are typically used in vertical farms, whilst chemical treatments are rarely applied because of the tightly controlled conditions, with lighting, irrigation, fertigation, and climate all being precisely adjusted.

Enthusiasts of the practise envisage locally grown produce which can be consumed within the community it is produced, solving traceability issues, slashing food miles, and reducing our reliance on food imports.

It is also thought that it could help to combat some of the industries difficulties with pollution and water use.

Stacked production systems allow food to be produced in a confined space meaning it can be produced close to where it is needed.

This is why vertical farming is primarily suited to higher value fresh crops such as salad leaves and herbs.

There are a number of major challenges that are preventing vertical farming from getting off the ground, most notably high costs.

There are high running costs as a result of the energy used by lighting and ventilation, whilst there is also a huge capital investment required to get vertical farms up and running.

Jim Monaghan is a Professor of Crop Science at Harper Adams University, he told us: “The key challenge is producing a product that can command a high enough price, but of a sales volume that supports the investment.

“Vertical farming can gain attention, but when put alongside cheaper field grown crops of a similar quality, the grower will need to find something special to justify the higher price.”

There are other concerns too. There have been cases of black mould and pest infestations, whilst there are also issues with vertical farming producing the same volume of produce all year round, even though consumer demand fluctuates seasonally.

A commercial vertical farming unit would have to either build excess capacity or rely on field crops to make up the difference.

“We know a lot already about this technology, it is now about fitting it all together with the right people.”

Technology has developed to manage vertical farming units using artificial intelligence and it is thought that this same technology could be used by wider agriculture in the future.

Gaia Growth are a start-up that has developed software which vertical farms can use to bring together data from a range of different sensors into a central hub that can be used by farmers to understand what is going on within the vertical farming unit.

The software was the brainchild of Cloud Engineer, Connor Williams who explained: “We are bringing all of the data from sensors around the farm into one place which then allows farmers to start making predictions and begin to automate devices, for example lights inside an indoor farm.”

This is the same technology that is used to manage large office buildings, but Mr Williams believes that it has potential for agriculture beyond vertical farming.

“We are focused on indoor farming at present, because that is where the immediate potential is for our business, but we believe there is huge scope for this software to be used throughout farming,” he said.

“One example could be using it to take in data on the environment, soils, and disease to judge when the optimum time to carry out certain tasks, such as chemical application, is.”

Vertical farming looks set to continue its rise over the next decade, with a report published in June this year forecasting growth of more than 25% for the sector globally, however what role is vertical farming likely to play within agriculture as a whole?

Dr Iona-Yuelu Huang from Harper Adams explained: “With technology in vertical farming improving at a rapid pace, it is believed that the cost of production for indoor farming will be reduced substantially.

“Fully automated robotic farming will increase with the fast development of AI and machine learning over the next five years. This can leave outdoor farming space for the cultivation of crops more suited to large machinery.”

Professor Monaghan added that he expects the future of vertical farming to be very specialised.

He said: “The future is one of specialised products and hyper local production. For example, this could be specialist small ingredients going into a food processor next door to the production unit.

“There will also be a place for very local, community units, but these will be more akin to a community farm.”