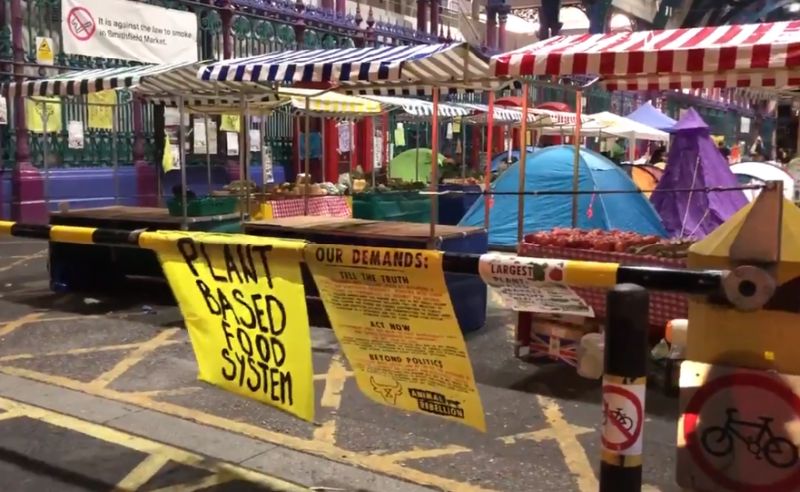 The UK's biggest meat market has been forced to shut down due to the Animal Rebellion protest (Photo: Rachael Venables/LBC/Twitter)

The UK’s largest meat market has been transformed overnight into a ‘plant-based’ market by environmental and vegan activists.

Activists in tents are currently occupying the centuries-old market, which has been trading for more than 800 years.

Meat stalls have been replaced with fruit and vegetables and vegan options, and signs dot the trading area calling for people to adopt a plant-based diet.

It is part of efforts to 'urgently end the industries of animal farming and fishing'.

Activists want to see a 'transition to a plant-based food system in order to avert climate breakdown, mass extinction and ensure justice for farmed animals'.

Smithfield (the UK’s biggest meat market) has been transformed overnight by climate activists into a ‘plant-based’ market.
Instead of cuts of meat you’ve got apples, rhubarb and onions in the stalls - and some furious traders outside who haven’t been able to work a shift. @LBC pic.twitter.com/v0LIIY5UN9

The Countryside Alliance, however, says it has members at the market who have expressed grave concerns about the actions of the protesters.

The group says some traders are fearing for their businesses as trading grinds to a halt.

It comes as the Met Police arrested 280 demonstrators by Monday night in what is seen as an eventful day for a campaign which is set to continue for two weeks.