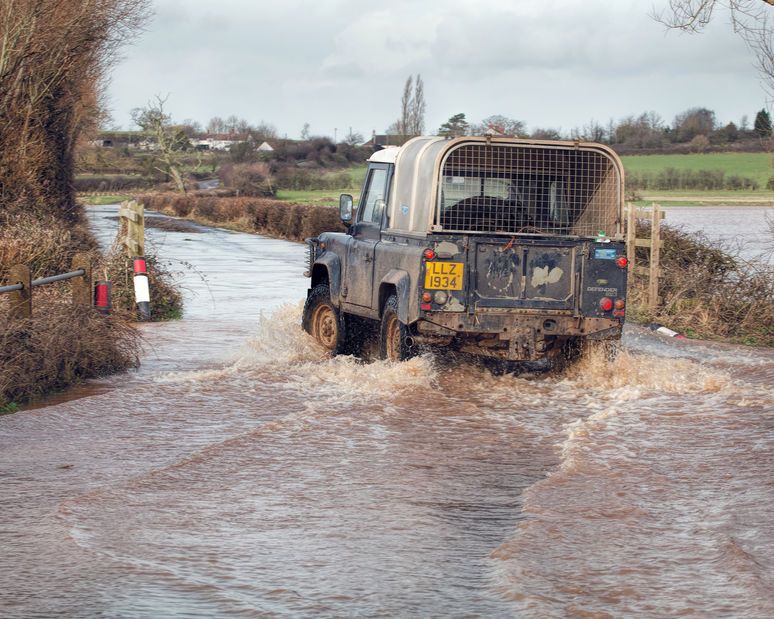 Rural communities across the UK have been urged to sign up to flood warnings after a weekend of severe weather disruption.

Numerous regions of the UK are facing another day of flooding and adverse weather conditions following torrential rain brought by Storm Dennis.

The Environment Agency has issued out more than 270 flood warnings and eight 'danger to life' severe warnings as of Monday morning (17 February).

The newly-appointed Defra Secretary, George Eustice, denied that the government had been caught off guard by the floods following storms Dennis and Ciara.

He told Sky News that the government had done a 'huge amount', blaming the 'nature of climate change' for the severity of the weather.

"These weather events are becoming more extreme, but we've done everything that we can do with a significant sum of money, and there's more to come," Mr Eustice said.

Persistent, heavy rain continued across the South of England on Sunday (16 February), with the weather remaining unsettled with showers and further spells of rain expected into this week.

On Sunday there was more than 600 flood warnings and flood alerts in place across England – more than any other day on record.

It has been an exceptionally wet winter so far with autumn rainfall records being broken for South Yorkshire, Nottinghamshire and Lincolnshire. England as a whole had its fifth wettest autumn on record.

"Storm Dennis will continue to bring disruptive weather into early next week, and there are flood warnings in place across much of England. We urge people to check the flood risk in their area and remain vigilant.

"It is important for people to be aware of their flood risk and stay safe by signing up for flood warnings, making a flood plan and remembering not to drive or walk through flood water – it’s not worth the risk."

She advised people to sign up for free flood warnings and keep up to date with the latest safety advice by calling Floodline on 0345 988 1188.

Farmers have taken to social media to highlight the level of disruption the persistent rainfall and floods are having on their businesses.

We have checked and cleared every river ditch drain and gutter on the farm and moved the sheep to be ready for #StormDennis but after 18 hours of rain there’s a huge amount of water about this morning. With 10 hours of rain still to come Sussex is going to be very wet pic.twitter.com/B6oXsUTL1y

Stephen Davies, who collects milk in West Wales, said the aftermath of Storm Dennis has made collection impossible in some areas.

Storm Dennis makes milk collection impossible from this farm, hopefully the river Towy in Carmarthen will drop enough so we can collect the milk tomorrow. #keeptrying #milkcollection #teamdairy pic.twitter.com/9HqWQPLIQX

Storm Dennis continued to rage through the night with rain on the wind. Sitting on top of a hill I catch the worst of it but many years of mother nature’s charms have taught me to hunker down as my ancestors did once the flocks are fed and safe. #winter #farm @NFUCountryside pic.twitter.com/ScbzepNZNi