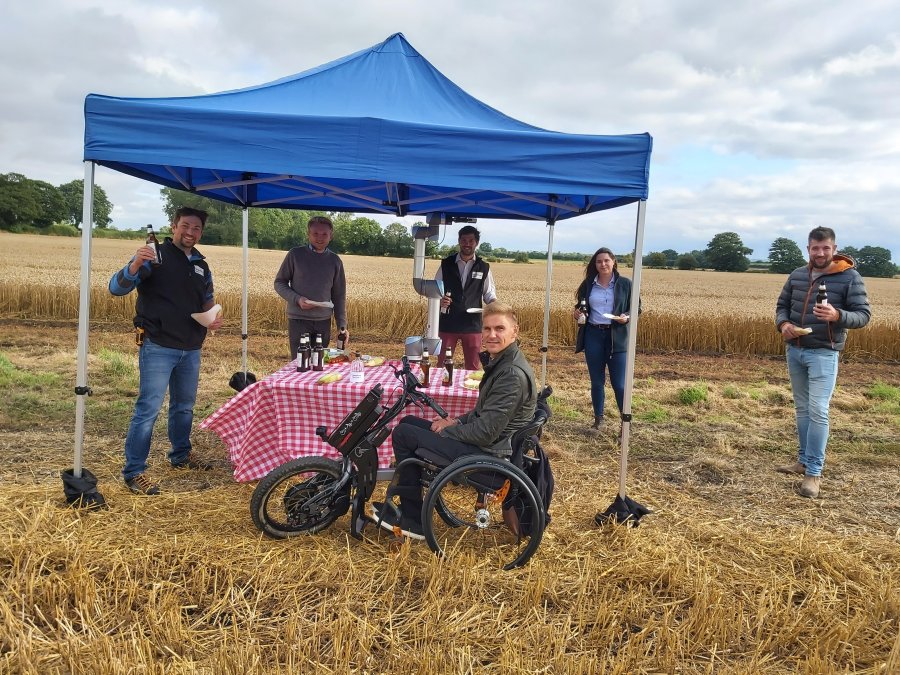 The team were the first in the world to plant, grow and harvest a crop using only drones and autonomous vehicles

A BBC Countryfile special looking at the future of the British harvest has screened, featuring the world's first farm to grow, tend and harvest a crop without operators.

The team behind the Hands Free Farm project welcomed the broadcaster to film the piece in August as they worked to complete their first full harvest, on Harper Adams University's Shropshire estate.

The 35-hectare farm is the successor of Hands Free Hectare, which started in 2016 with the aim to be the first in the world to grow and harvest a crop without operators or agronomists on the ground.

The programme, aired on Sunday (10 October), followed three Hands Free Farm team members to examine the history of the project and how they fared tackling this year’s harvest.

Viewers were told how the trio and the wider team were the first in the world to plant, grow and harvest a crop using only drones and autonomous vehicles on the hectare in 2016.

Countryfile presenter Steve Brown was shown meeting the team as they made their final preparations, to learn more about both the machinery they were using and their plans for that day’s harvest.

“The lads have programmed this dinky tractor and combine to work alongside each other in the field," he said, "And their lightweight size is kinder on the soil than some of those bigger boys.”

Mechatronics researcher for Harper Adams, Jonathan Gill said that by having smaller machines, physically compacting on the ground, it meant there’s a lot less physical metal just driving around over the field.

"We’re hoping that the capabilities of having much smaller, multiple machines is a lot more efficient," he explained.

Later in the programme, viewers were shown how the machines tackled their first full-scale wheat harvest on the farm.

Steve described the technology as ‘amazing’ and fantastic, but wondered how some might feel watching a harvest without any drivers.

The Hands Free team responded by saying their work is not about taking jobs away from the sector, but rather about changing the jobs that farmers do as they adapt to the future.

This was something Harper Adams student - and harvest veteran - Eleanor Gilbert picked up on as she watched the machines do their work.

She told the BBC crew: "I might keep my tractor I’ve got at the minute, just in case – but I think it’s more that we’ll have a change in our skill set.

"Rather than sat on a tractor all day, we might have to control tablets and swarms of little robots," she added.

Steve added: “Eleanor is spot on, that is the dream. Even though this little combine cuts a third less than a bigger machine, if you had a fleet of them working together, you’d finish this field in no time.”

At the end of the day, the team were pleased with their work, despite one technical hitch in communication between the combine and tractor, which they were able to fix for the rest of the harvest.

Jonathan told the BBC crew: “To be able to do something, from a single hectare, now to a farm – and it’s come a long way – I’m really proud.

“My heart has swollen loads today by being able to showcase this.”

The three-year-long project is run between Harper Adams and Precision Decisions, along with the UK division of Australian precision agriculture specialist, Farmscan AG.