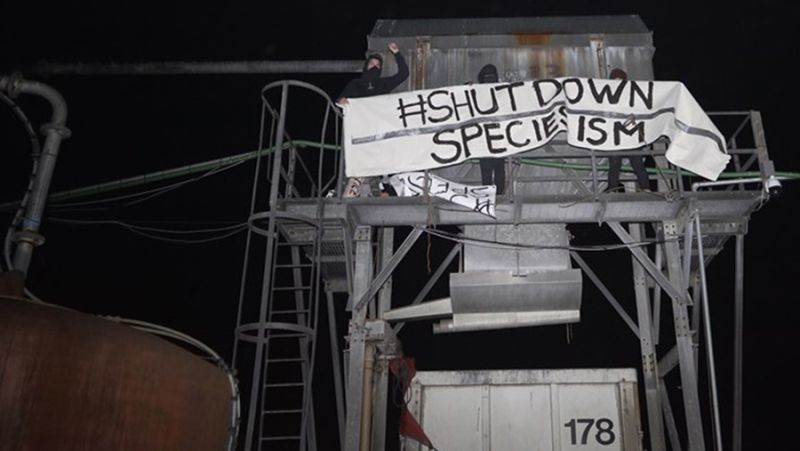 Two slaughterhouses owned by Forge Farm Meats were targeted by the activists, many of them hooded and masked.

They glued themselves to machinery at the Tunbridge Wells abattoir in the early hours of Tuesday morning (27 August).

Meanwhile, others moved sheep into a temporary holding pen on the premises.

Images and videos released by the vegan group SMASH Speciesism show sheep in pens as lights from the protesters are shone.

A Forge Farm Meats spokesperson said the protest was ‘inconvenient and pathetic’.

HAPPENING RIGHT NOW IN THE UK - activists have locked on to Forge farm slaughterhouse in Tunbridge Wells. Please share!! Ring forge farm on 01482538768 & email them on mailto:sales@forgefarm.net to demand the release of the sheep & ask what is going on. Flood them!! #GOVEGAN pic.twitter.com/fp2JfOF0L6

Kent Police, who have arrested and charged people following the incident, said: ‘Officers were called at 3.35am to reports of a protest at a business in Powder Mill Lane, Tunbridge Wells.

‘Officers attended to speak to those involved and remain at the scene.’

This is how police are removing an animal rights protestor from an abattoir in #TunbridgeWells. The man inside that orange stretcher is one of four people at the top of that tower who have been there since 3.30 this morning @bbcsoutheast pic.twitter.com/3Hh1ANF5lk

It comes as thousands of activists plan to blockade Smithfield Market, the largest wholesale meat market in the country.

The two-week long protest will start on October 7 by groups Surge and Animal Rebellion.

In May, around 200 activists stormed a Lincolnshire pig farm. They were blamed by the owner for causing the death of two piglets.