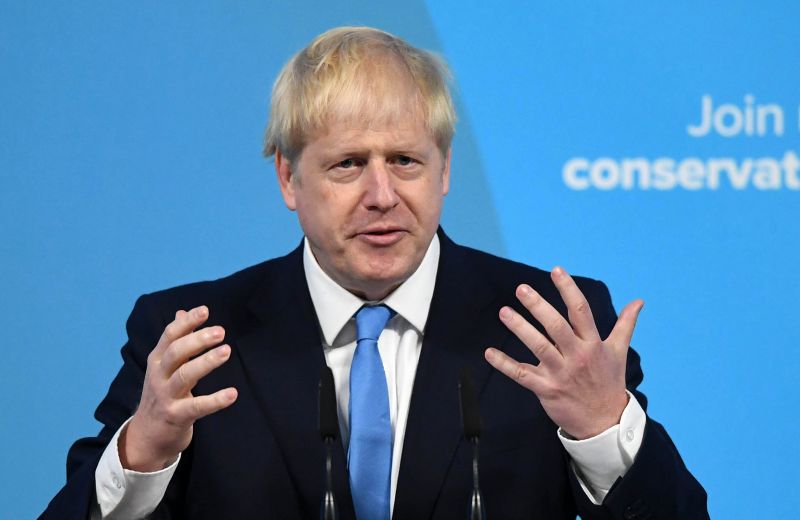 Boris Johnson's stances on farming and rural issues have been cast in the spotlight following confirmation that he will become the next Prime Minister.

The former Mayor of London will become the UK's next prime minister after being elected leader of the Conservative Party, beating Jeremy Hunt.

Reacting to the news, NFU President Minette Batters urged him to do 'everything in his power' to ensure that the UK's departure from the EU is carried out in a 'smooth and orderly way'.

The National Sheep Association (NSA) called on Johnson 'not to play populist politics' as he sets out his Brexit plan.

The Country Land and Business Association (CLA) echoed those views, and said the rhetoric of no-deal 'must not be allowed to become the political default option'.

It comes as the farming industry and the wider rural community demands major change from the new Prime Minister as a recent survey paints a sense of deep frustration with Brexit and general countryside issues.

On farming and rural issues, he has pledged an extra £25m-a-year in subsidies for farmers post-Brexit, in particular those in Scotland.

Johnson, who campaigned to leave the European Union in 2016, has also signalled that he is prepared to ban the live exports of animals.

In an interview with the Countryside Alliance, he pledged to make more funds available to address “imbalances that affect rural communities.”

He would also ensure that laws on wildlife management and animal welfare were based on “facts rather than emotion”.

Johnson added that rural communities will be “central to kick starting the British economy” after the UK leaves the EU on 31 October.

“Around a third of our businesses are in the countryside and I will ensure that they have access to superfast broadband by rolling out full fibre 8 years ahead of the current target in 2025,” he pledged.

• Will you ensure funding is available to deliver the Government’s commitment of a full fibre broadband network across the UK by 2033, prioritising connectivity in rural areas?

Boris Johnson: “Yes. I am fully supportive of making sure that rural communities are not left behind through lack of connectivity. With close family members dotted throughout the countryside I know just how vital this is.”

• Will you commit to ‘ring-fence’ funds for rural development within the new UK Shared Prosperity Fund?

Boris Johnson: “I can assure you that, under my leadership, no rural area will be left behind, and I have pledged that more funds will be made available to address imbalances that affect rural communities.”

• Will you ensure that Government policy across all areas is ‘rural-proofed’, as recommended in the recent report from the House of Lords Rural Economy Committee?

Boris Johnson: “I will ensure that the concerns of rural communities are considered in our policies. Governments have all too often been guilty of not thinking through how policies impact on some of our most remote areas. We need to reverse that.”

• Will you commit to supporting rural post offices, and making the post office network a front office for government services?

Boris Johnson: “I believe that we do need to support rural post offices, and as Prime Minister will commit to looking at what we can do to improve this vital resource.”

• Will you ensure that future agricultural and environmental policies outside the EU support upland landscapes and communities?

Boris Johnson: “Yes – and this will be easier when we are responsible for our own decision making.”

• Can you assure the 650,000 holders of shotgun and firearms certificates in the UK that there will be no undue restrictions on legitimate gun ownership and use?

Boris Johnson: “We rightly have some of the strictest gun laws in the world. I believe that legitimate ownership and use should come with robust levels of responsibility too. Changing these laws is not a priority.”

• Will you seek to maintain access to the EU Firearms Pass in our new relationship with Europe, which provides free and frictionless movement of lawfully held firearms across EU countries along with Norway, Iceland, and Switzerland?

Boris Johnson: “I will be aiming to ensure that we have a trade deal that minimises friction on the cross border transfer of goods, while ensuring that our border is secure and protects UK citizens. I will be happy to discuss specific concerns as we strike that deal.”

• Will you commit to implementing measures to counter animal rights extremism, including any relevant recommendations from the Government’s Commission for Countering Extremism, which is due to report this summer?

Boris Johnson: “While I am committed to protecting animal welfare, I will not tolerate extremism, intimidation and abuse irrespective of the motives that drive it. I will consider any recommendations that come from the Commission.”

• Will you ensure that all wildlife management and animal welfare legislation are based on principle and evidence?

Boris Johnson: “Yes – these are areas that rightly generate passionate debate and discussion and we therefore owe it all interested parties to base law on facts rather than emotion.”

• Can you confirm that there will be no unjustified restrictions on the list of avian pests, including those species controlled to protect crops, livestock, and biodiversity?

Boris Johnson: “As with any wildlife issue the Government’s position will be driven by the highest quality independent evidence.”

“School budgets in our rural schools have been under pressure, that’s why I am boosting per pupil school funding, so every child gets a quality education.

“And I am the only candidate committed to leaving the EU by 31 October so we get out of the Common Agricultural Policy and deliver the support our farmers need so they can grow, sell and export more British food and drink,” Mr Johnson said.