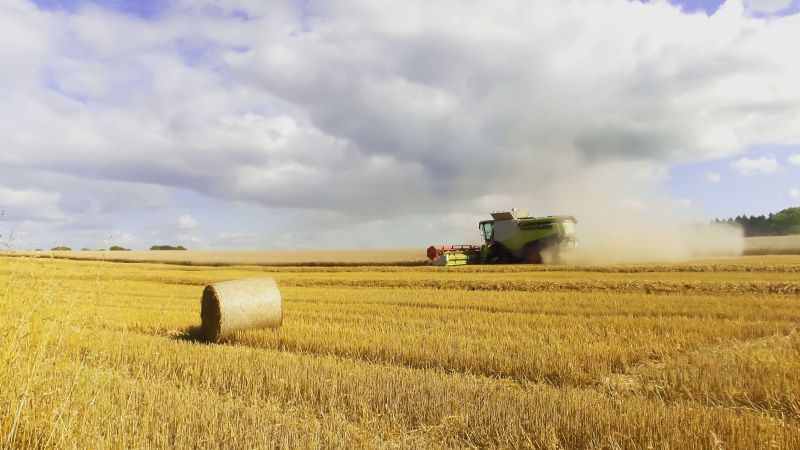 Some sectors, such as cereals, potatoes, fruit, vegetables and eggs, will not have the same level of protection as others, farmers fear

The government has been told to scrap its current Brexit tariff schedule because it 'severely exposes' some agricultural sectors.

Farming unions have concerns that the proposed tariff schedule would be 'catastrophic' to British agriculture.

It would mean a sizeable reduction in tariff rates for incoming beef, poultry meat and dairy products.

There would be a complete removal of the tariffs barrier for the egg, cereal and vegetable sectors despite World Trade Organisation tariffs being placed on UK exports of these products to the EU.

Special tariff arrangements would also apply to imports over the Irish land border, meaning that all products crossing into Northern Ireland will have no tariff charged at all.

The government has instead been urged to pursue a post-Brexit approach to international trade that 'acts in the best interests of food and farming'.

That call follows yesterday's (28 August) announcement on plans to suspend parliament next month, further shifting the prospect of a no-deal Brexit from possible to probable.

In a letter to Secretary of State for International Trade, Elizabeth Truss, NFU Scotland said the proposed tariff schedule would 'severely expose' sectors such as cereals.

It warns of the UK market being flooded with sub-standard goods from countries with lower standards.

NFU Scotland President Andrew McCornick said: “We are being increasingly undermined by pursuit of a no-deal and the prospect of a hugely damaging tariff schedule.

“The planned import tariff and tariff rate quota (TRQ) schedules published in March expose the catastrophic impact that no-deal would have on the agricultural sector.

“Whilst the stated intention is that some agricultural products will be deemed sensitive, the crushing reality is that cereals, potatoes, fruit, vegetables and eggs will not have the same level of protection.

“By excluding these sectors, the government is failing to recognise that the impact of a no deal Brexit will be felt severely across every agricultural sector,” he said.

The union warns that asymmetrical treatment of the different agricultural sectors is 'wholly unacceptable'.

It is urging the government to review its approach to tariffs or 'prepare to respond to massive market disruption'.

“We want to work closely with Scottish government to develop and jointly put forward common sense solutions to the import tariff situation and any review carried out by UK government,” Mr McCornick said.