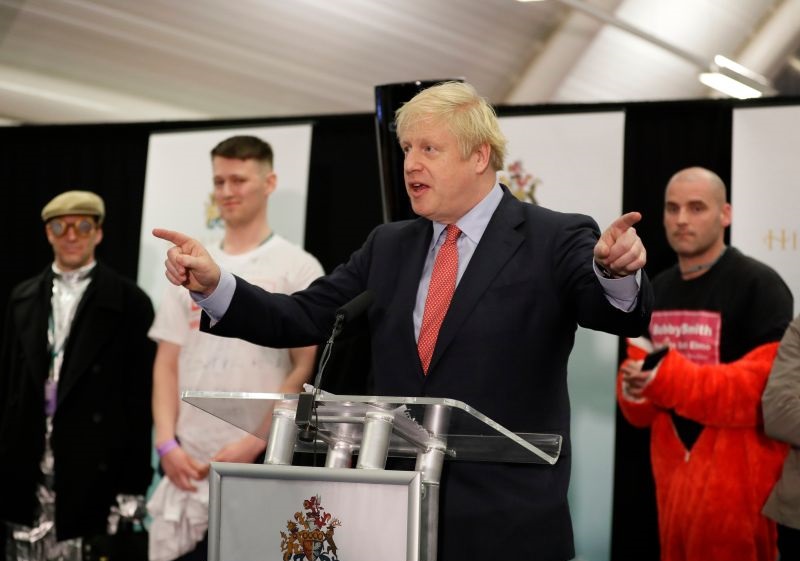 The Conservatives have passed the 326-seat threshold (Photo: Kirsty Wigglesworth/AP/Shutterstock)

The Conservatives have won an overall majority in the general election as Labour's so-called 'red wall' of Leave-backing seats turn blue.

Prime minister Boris Johnson will return to Downing Street with a majority after an extraordinary election night.

Last night's 10pm exit poll suggested the Tories would win a decisive majority. As of Friday morning (13 December), this has become a reality.

Describing the results as 'very disappointing', the Labour leader Jeremy Corbyn said he would not lead his party into another general election.

Speaking after being re-elected in his Uxbridge and South Ruislip constituency, Mr Johnson said the result would give his government the mandate to 'get Brexit done' by the end of January 2020.

In other developments, Liberal Democrat leader Jo Swinson lost her Dunbartonshire East seat to the SNP by 149 votes, who have made significant gains in Scotland.

A majority Conservative win means the UK leaving the European Union now looks more likely than it has ever been.

Of interest to farmers, the party has guaranteed to protect the current annual budget for the industry.

According to its election manifesto, the Tories have also pledged to 'free' farmers from the 'bureaucratic' Common Agricultural Policy (CAP).

In return for funding, farmers would be encouraged to work in a way that protects and enhances the natural environment, as well as safeguarding high standards of animal welfare.

Post-Brexit, the public sector would be encouraged to buy British and back UK farmers in a move which would 'reduce environmental costs'.

The manifesto says: “We want people, both at home and abroad, to be lining up to buy British, and one of the great opportunities of Brexit is the chance to lead the world in the quality of our food, agriculture and land management – driven by science-led, evidence-based policy.

“And we want those same farmers and fishermen to act as the stewards of the natural world, preserving the UK’s countryside and oceans as they have for generations.”

The Conservatives have also pledged to increase the annual quota for the Seasonal Agricultural Workers Scheme, from 2,500 to 10,000 people.

Other policies include rolling out gigabit broadband across the country by 2025, providing greater mobile coverage and redirecting more police resources to tackle rural crime.

The party has announced a 'triple tax lock', saying there would be no increase in the headline rate of income tax and National Insurance, as well as VAT, for 5 years.