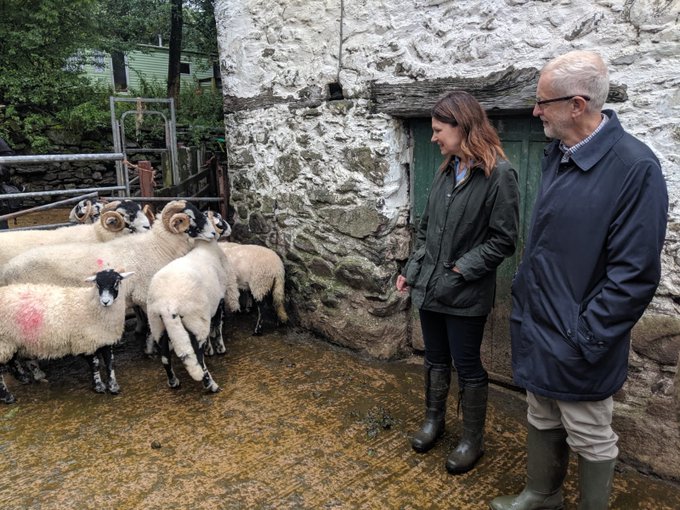 The Labour Leader and Shadow Defra Secretary visited a farm in Cumbria yesterday to make his no-deal warning (Photo: @JeremyCorbyn/Twitter)

Jeremy Corbyn has said he will do 'everything necessary' to defend the British farming industry amid a possible 'no-deal carnage' Brexit.

The Labour leader made his pledge after he called on opposition leaders to meet him next week to find ways to stop Boris Johnson's government heading for no-deal.

The Liberal Democrats, the SNP, Change UK, Plaid Cymru and the Green Party have all agreed to attend his meeting.

Mr Corbyn was speaking on Thursday (22 August) during a visit to a farm in Cumbria to highlight his opposition to the UK leaving without a deal.

He said: “The damage to our farming industry of such a reckless and unnecessary act is symbolic of Boris Johnson's approach to Brexit.

“There is no mandate for this no-deal carnage, which we will do everything necessary to stop.

Sheep farming in Cumbria isn't just a job, it's a tradition passed from generation to generation.
We will do everything we can to stop the Tories' pointless No Deal Brexit damaging it. pic.twitter.com/fK2DKU0wnY

Today @jeremycorbyn and I visited Rake Foot Farm in Cumbria.
A no-deal Brexit risks the future of our countryside as well as our nation’s food security.
Now is the time to fight to save our farms from being undercut and sold down the river by this Conservative government. pic.twitter.com/LwXacG5LLH

“The needless, forced slaughter of millions of sheep is the perfect metaphor for a no-deal Brexit.”

The government has however insisted culling livestock is 'absolutely not on the cards' and the Ulster Farmers' Union (UFU) said any mass cull amounted to 'scare tactics'.

The Shadow Defra Secretary, Sue Hayman, added that the UK's food security was at stake, highlighting how thousands of jobs depend on the food and farming industries.

“British farming is the bedrock of the food and drink industry - Britain's largest manufacturing sector, bigger than the aerospace and car industries combined.”

“A no-deal Brexit risks the future of our countryside as well as our nation's food security. Now is the time to fight to save our farms from being undercut and sold down the river by this Conservative government," she said.

Last week, farmers who are campaigning for another vote on Brexit highlighted how a no-deal could put over half of farms out of business.

The report, launched by ‘Farmers for a People’s Vote’, warned 50% of British farms could be put out of business by the mid-2020s in the event of no-deal.