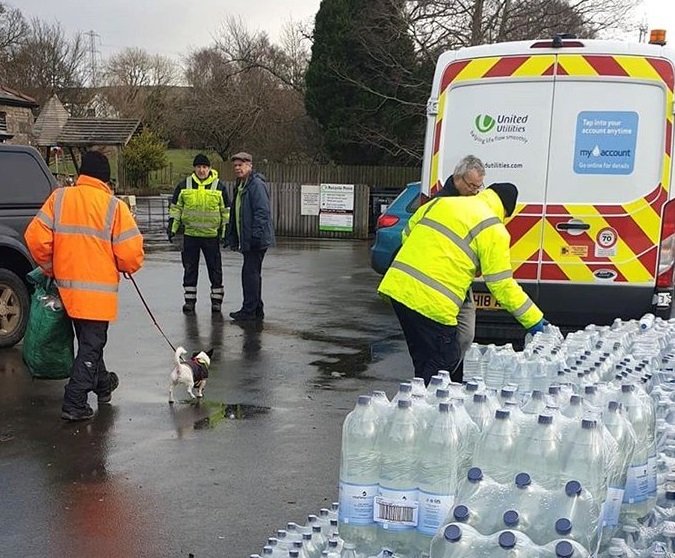 Cumbrian farmers have highlighted their fears over ongoing water supply problems and the effect it is having on livestock health and welfare.

A special helpline for farmers has been set up by United Utilities as efforts continue to repair a major water main damaged by the recent Storm Ciara.

Supply issues in the Eden Valey have affected 8,000 homes and business in the district.

Special arrangements have already been made for 70 farmers, and any others who need support are being urged to get in touch with the water firm.

One anonymous farmer told ITV Border that the water shortages were 'getting to crisis point and if it carries on much longer animals could die.'

Update for customers living in #Shap & surrounding villages. The below clip shows the damage caused to the water main due to the storm. Our teams have been working around the clock to carry out the repairs. We'll keep our website updated here: https://t.co/sklGbO855s. pic.twitter.com/5rNxiCla0l


But progress was on Tuesday night into Wednesday morning, despite the challenging weather conditions and a new water pipe has been assembled.

After the pipe is fully repaired it will take some time for water pressure to build up again in the system, due to the length of the pipe network, United Utilities said.

Farmers in the district will continue to see no water or poor pressure as the system recovers, which could take three days.

The company added it is possible that some people may notice some discolouration naturally occurring pipe sediment could be disturbed.

A massive tankering operation is underway to pump water supplies directly into the water network.

An update for farmers across the impacted areas of the Eden Valley. We’ve spoken to & agreed a plan with 70 farmers across the region so far & are keeping their situation under review. If you’re a farmer & yet to speak to us then please call us on 03450726071 if you need support. pic.twitter.com/V8qBm3xnNq

There are now 46 tankers including several from outside the North West region supporting the effort.

Martin Padley, Water Service Director at United Utilities, said: “Our tankering operation is helping to maintain some water supplies and we have drafted in additional tankers from outside the region.

“The weather conditions and rural roads are making this especially difficult for driving HGVs and we are grateful for the support of the local council here.

“It is likely to take another three days for water pressure to build again once the repairs are completed.

“In the meantime we will continue to run the bottled water stations and work with farmers to get them the extra help they need.”

Residents can collect bottled water and speak to staff from United Utilities at the following locations:

The helpline for farmers is 0345 072 6071 and all customers can see the latest information about water supplies on United Utilities website.