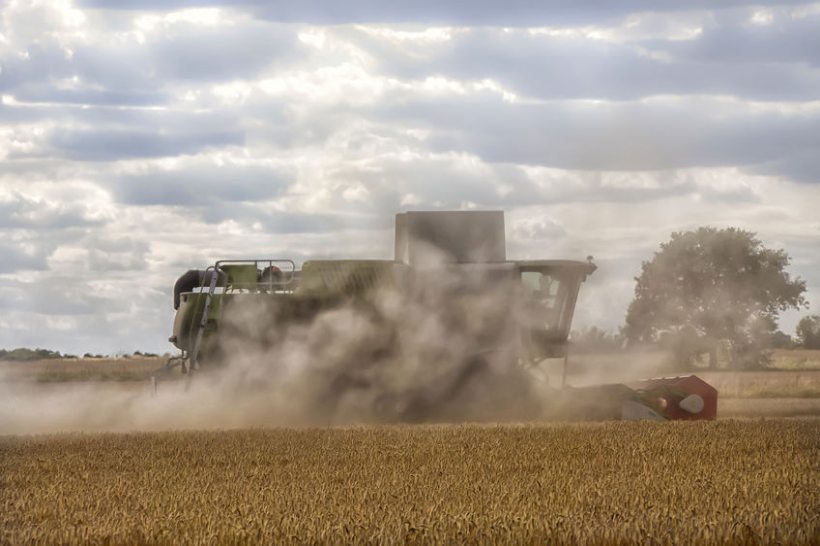 Farmers across the UK have faced challenging harvesting conditions this year

High-tech scientific data has confirmed the worst UK harvest in at least 25 years following a year of extreme weather conditions.

New data has revealed the extent of the reductions in the amount of arable land sown with crops and also the yield at harvest.

This comes after a triple whammy for farmers: torrential rain at crucial times hampered sowing of most types of crops, an exceptionally dry spring affected plant growth and heavy downpours in August created challenging harvesting conditions.

Satellite data by the UK Centre for Ecology & Hydrology's (UKCEH) show there was a dramatic reduction in the area planted with higher yielding and more profitable autumn-sown crops, including wheat and oilseed rape.

This was largely due to the exceptionally wet autumn and winter, resulting in saturated ground conditions.

In Britain, there was a reduction of around 40 percent in area of these crops, compared to the average for the previous five years.

Some areas were even worse hit, with coverage of autumn-sown crops down by around 70 percent in the East Midlands.

Saturated ground caused by torrential rain in February and early March also hampered the planting of the spring-sown crops such as barley.

Added to this, real-time measurements from combine harvesters show that the actual yield at harvest for the wheat, oilseed rape and barley that was sown was down by an average of around 15%.

The extreme weather over several months has reduced both the quantity and quality of UK crops this harvest, hitting farmers’ incomes.

UKCEH and farming groups have warned it could be increasingly difficult for farmers to deal with the impacts of more frequent extreme weather events linked to climate change, with the past decade seeing more extreme wet and dry spells.

Dr William Fincham, a Spatial Ecological Modeller at UKCEH, who collated the crop yield data, said farmers have faced 'many challenges' in the past few months due to extreme weather.

"The actual figures from this year’s harvest confirm the widely predicted large falls in yields of most crops," he said.

“High investment by farmers in fertilisers, pesticides and machinery has generally ensured good yields in the past, but increasingly extreme weather makes it harder for them to make up the difference.

"Farmers may need to widen the range of crops grown and change some agricultural practices in future to help spread the risk.”

Crop maps produced annually by UKCEH and Remote Sensing Applications Consultants use satellite data to show the type of crop grown in all two million fields across Britain.

This year’s map revealed the area of winter wheat grown was down across the whole country by 44%, winter barley by 37% and oilseed rape by 38%, compared with the average for the previous five years.

Meanwhile, analysis of data on yields collected during the last two months from across 100 farms in England has shown an average fall in yield across these crops of around 15%, compared to the five-year mean, with the tonnage per hectare in some places down by two-thirds.

Berkshire wheat grower Nick Philp said the volume of crop harvested this year was down by 25% compared to the average over the previous five years, which is what he had budgeted for.

This amounted to a combined loss of £200,000 for the farm and its clients: “Without doubt we are seeing more extremes of drought and wet weather," he said.

"We need to develop resilience in our agricultural soils and wider environment. Soil science has a massive part to play in developing resilience but also mitigating climate change with the ability to store carbon.”

UKCEH-run crop yield network provides real-time data as part of long-term surveillance of the impact of environmental factors on yield.