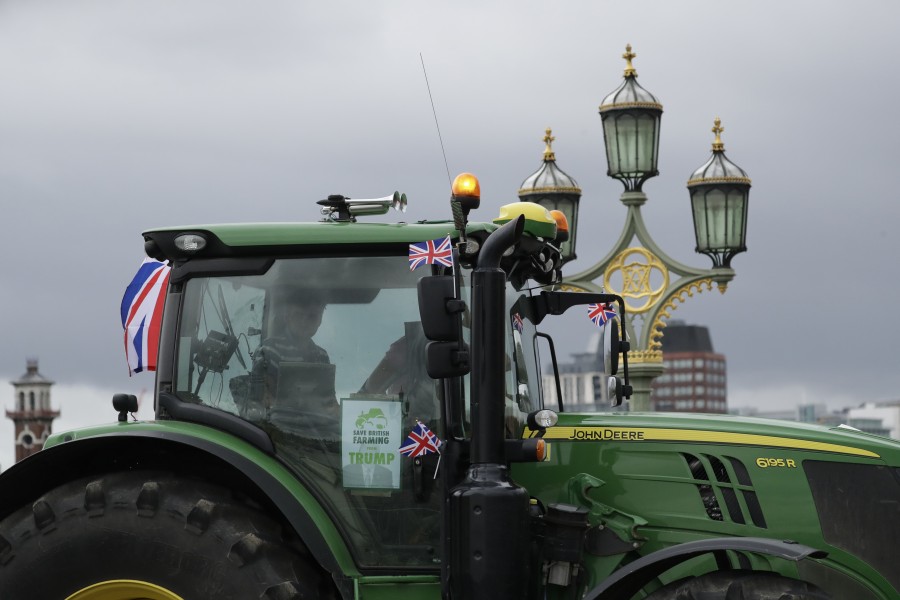 Save British Farming activists are lobbying MPs as the Agriculture Bill returns to the House of Commons (Photo: Matt Dunham/AP/Shutterstock)

A farmers' campaign group is planning on returning to Westminster's Parliament Square to protest against lower-standard food imports.

Save British Farming (SBF) is hosting a second demonstration to coincide with the return of the Agriculture Bill in the House of Commons.

The government's landmark post-Brexit Bill is nearing the final stage of the legislative process, before it gains Royal Assent.

The SBF is planning on a 'socially-distanced tractor demonstration', to take place on Monday 28 September.

Activists want to protest against 'the opening of floodgates to lower-regulated food' as the government looks to free trade deals with the likes of the US.

The first demonstration took place on 8 July. Videos of it were posted on social media, showing dozens of drive-slow, socially-distanced tractors around Parliament Square.

Celebrity Masterchef winner Emma Kennedy endorsed the protest, and she urged the public to write to their MP to save British farms from 'going under' post-Brexit.

The SBF is now calling for more pressure to be put on MPs to vote to protect the UK's farming and food standards as the Agriculture Bill returns to parliament.

"The government is selling British farmers down the river," the group said, adding that the Bill would also ditch the UK's high animal welfare and environmental standards.

"As the UK-EU negotiations are faltering, a no-deal Brexit is the most likely outcome and that puts Britain at the mercy of the US farm lobby.

This is last chance for MPs to stop a free-for-all from which ???? agriculture would emerge the loser.
Which is why we want to fill Parliament Square with our tractors/farm vehicles.
Are you going to sit with your head in the sand or join us? https://t.co/XXckC6RPNf

"We need to put pressure on MPs to vote to protect our farming and food standards."

It comes as MPs in the House of Commons voted to reject an Agriculture Bill amendment which wanted to safeguard British food standards post-Brexit.

This is despite an NFU petition, signed by over one million people, calling for the government to uphold the UK's high food and farming standards.